I did a long write up on the fallen from grace Monk years ago, focusing on the fact that with the new version of Talisman, where your characters can easily gain Craft by sending in trophies, the Monk would either be the most powerful character in the game or, as he is now, one of the worst and just how difficult it must have been to design him so he retained his original flavor but wasn’t totally broken.  Basically he got nerfed so bad no one would ever select him if given a choice, as there are few characters worse than the monk these days.

However, I’ve been really pleased with the FF Talisman design team’s designs. I think Fantasy Flight were AMAZING shepherds of this very difficult brand and game since many of us are utter fanatics and I, for one, had a tough time letting go of 2nd edition.  Fate has won me over, gaining craft from trophies has won me over (not totally…) and even dealing with the Balkanization of players with all the boards is OK if you don’t play with all the boards.

One of the designs I want to discuss is the new Bounty Hunter from the City Expansion; despite the fact that he looks like a gladiator. I’ve been in one game vs him and feel that he is a very strong character, but one that does some things absolutely new to Talisman that especially effect experienced players.

First let’s talk about trophies in 4th edition.  Since your Craft and Strength stacks are extremely vulnerable in the game to Spells and some adventure card effects, it’s best to not have a stack of either until you absolutely need it.  Tactically, this means turning in trophies at the very, very, very last moment to gain the Craft or Strength from them–right before a roll vs a monster where you absolutely need it.  Also, psychologically, the other players are looking at your stacks of chips (you are using poker chips right?) to see how close you are to going for the win.  If they don’t see a stack, they will assume you are weak and fiddle around rather than attacking you or going for the win themselves.  This is crucial, and the designers know this.  It takes a bit of play to know when to turn in your trophy stacks, but the basic concept is simple– don’t walk around with a large stack of craft or strength unless you have to. Turn in trophies as a surprise when attacked or attacking another character FTW! 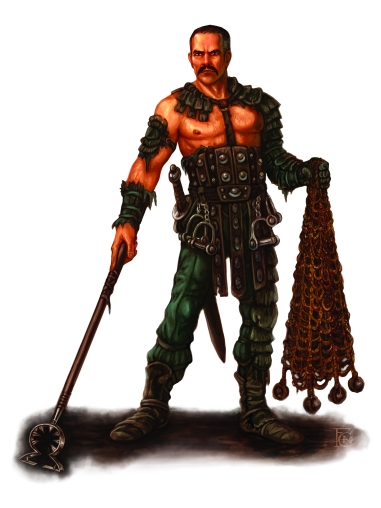 While the Bounty Hunter seems only slightly annoying to new players,  advanced players quake in fear in that he attacks your trophy stack rather than your Strength and Craft stacks because they will be sitting on as many as possible for as long as possible.  With him on the table you can’t be holding onto a huge pile of trophies because there is always the chance that he will drop on in and help himself to them.  This means players in a game with the bounty hunter will be spending their trophies ASAP, leaving their stacks of craft and strength vulnerable to spells and other effects.  The Bounty Hunter is a very meta-esque card that also can work for noobs that don’t even hoard trophies to protect their (future) stat increases.

The Bounty Hunters other special effects are gold when he wins battles which with the addition of the City board, actually helps rather than gold accumulating uselessly late game.   Note that he also wins stand offs against monsters and other characters, in combat and psychic combat, so his first goal in a game is to get the Full Plate armor.  We don’t play quite enough to determine tiers for characters in 4e like we did in 2e, but I feel the Bounty Hunter is way up there, especially if he can get some sort of mobility control to start grabbing those trophies.