Ah, Talisman…a chance for lady luck to have her way with us and endup passed out in the backseat with our underwear around our ankles most of the time–unless we draw the MONK! The grizzled veterans tell their tales and it’s well known that the Monk is  one of the top tier characters along with the Prophetess and the Astropath (from the Timescape expansion).  Depending on the expansions to 2nd edition that you have, it’s an ‘any given sunday’ situation with those three, but while the Prophetess can get stomped, and the Astropath can get a little unlucky raping the Timescape deck, the Monk has few weaknesses at any point in the game.  Having now played my 11th game of 4th Edition2.0 Talisman from Fantasy Flight, it’s become clear, with the Astropath awaiting his appearance (in some form or other) and the Prophetess nerfed (in a rather good way I might add), that the Monk– if played without the mega-nerf from the Fantasy Flight upgrade pack– is lord and master of Talismanland.  Out of the 11 games,  4 had the Monk, and of those 4, only one game did the Monk not prevail due to a late-game Toading no less.

That said, I want to explain why I think, unfortunately, he cannot be fixed in the present edition.

First and foremost, one of the major changes to Talisman 4th Edition from 2nd is the ability for characters to take Craft-based enemies as Trophies.  Trophies are the new name for when you defeat an enemy in battle and take the card and when the amount of strength (or craft) = 7, you can turn it in for a strength (or craft).  In 2nd Edition Talisman, only Strength-based enemies could be taken as trophies.  Craft was gained in other ways (rolling the mystic, craft spells, etc.).  Hence the path to victory for craft-based characters was longer and a bit more arduous– however, most had advantages over their strength-based characters with better special abilities or constant access to spells.  What’s more, the route to the crown of command was less dangerous via the craft method: the Mine route has the character face the Vampire Lord, who has the potential to be far less deadly than the equivalent on the Strength side–Dicing with Death.

The addition of allowing characters to take craft-based trophies, while logical in many respects, breaks with the original design of the game.  It allows characters to ramp up their Craft with a speed unheard of in the older editions (just a note: I don’t really count 3rd as canonical).  The traffic of characters going through the Mines-Vampire-Pit Fiend pathway to the middle as increased massively as a result (as noted above, it’s always better to hit the Vampire up there compared to the sometimes fatal Dice with Death on the Crypt side), but more importantly, it increases the Characters who start with a high craft and can attack other characters using Psychic Combat (Ghoul, Wizard, Sorceress) ability to have a whole pile of craft to crush in PVP.  While those three characters are solidly in the second rank (the Sorceress may be in the first rank) in terms of character tiers, the character this fundamental change to the game effects the most is, predictably, the Monk.

Let’s have a look at what the Monk can do other than sit there and look like a fat slob: 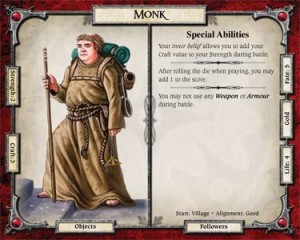 Your inner belief allows you to add your craft value to your strength during battle
After rolling the dice for praying, you may add one to the score.
You may not use any weapon or armor during battle.

So, our man here starts with one seemingly major disadvantage with his inability to us any weapons or armor in combat, a minor advantage with the praying bonus, and what has always been the greatest single skill in the game– adding your craft to your strength score in combat as if the character always had a warhorse or always had a Psionic Blast spell.   This gives the Monk an effective 5 strength out of the gate as well as the ability to increase this with an increase in either Strength or Craft– a huge advantage over all the other strength-based characters who can only increase their combat value with weapons (at most 3 strength) and Strength increases.  Given that in the old edition, Craft was not all that easy to come by, the Monk was still very powerful, but with the addition of Craft Trophies in 4th edition, the Monk is well nigh unstoppable and had to be nerfed.

The 4th edition 2.0 Fantasy Flight nerf to this power is listed in the description above.  Note the word ‘Value’ next to craft — this means that the Monk can only add his starting Craft to his strength for the entire game, regardless of his current Craft score, and that amounts to a measly +3 in combat.   This kicks the Monk from the top tier to down somewhere around the Elf for effectiveness.  Sure, the Monk has an early advantage in that he can rack up some strength Trophies along side the likes of the Troll or the Ogre Chieftain without the weakness to Craft enemies, but this is going to be short lived.  Since Talisman scales itself as characters gain in Strength and Craft, a +3 advantage has a minor effect in the mid game, when players have 6-11 strength and rather useless in the late game when players are pushing 12-20 strength.  In addition, the inability to use weapons or armor, a minor drawback in 2nd edition, becomes a major flaw for the Monk in 4th.

Now we have a character who’s original ability ported over to the new edition of Talisman is heavily unbalanced (and in a game as unbalanced as Talisman, that’s saying something!) and a nerf to that ability that makes him far too weak to compete.  What was the solution? Tack on a heavy load of Fate points!   Though characters of Good alignment cannot normally get their Fate points back, a whopping 5 really shows to me that the design team was reaching to try to bring the Monk back to parity, even to characters of mid-range power.

At this point in this post, I would normally bust out my ingenious solution to this design problem and say it’s the best (though, of course, not playtested nearly enough) and say something like’ how could the designers not thought of it?’  The solution or even good suggestions for this problem, however, I do not have.    One way would be to disallow the Monk to gain Craft or Strength trophies during the game, but then you may be back to nerfing the character so much that he’s, again, as bad as the Elf.  A second may be to change the Monk’s alignment to Neutral rather than Good.  Though Fate is good, healing for free at the Chapel any time you need to is even better and means trying to PVP the Monk early game (as say the Troll or Sorceress) is a real chore.  The third idea would be simply to increase the amount of Warhorses in the Adventure deck and (especially) add one into the Purchase deck.  This will allow most savvy players to at least attempt duplicate the Monk’s ability.  Again, none of these three ideas are what I would consider a good fix for the problem. That said, I think the Monk as printed in the original 4th Edition was a glaring, overpowered oversight due to the addition of Craft trophies, but the 4th 2.0 fix makes the Monk so weak that he’s rarely going to see play–and it’s also a terribly boring power to have.