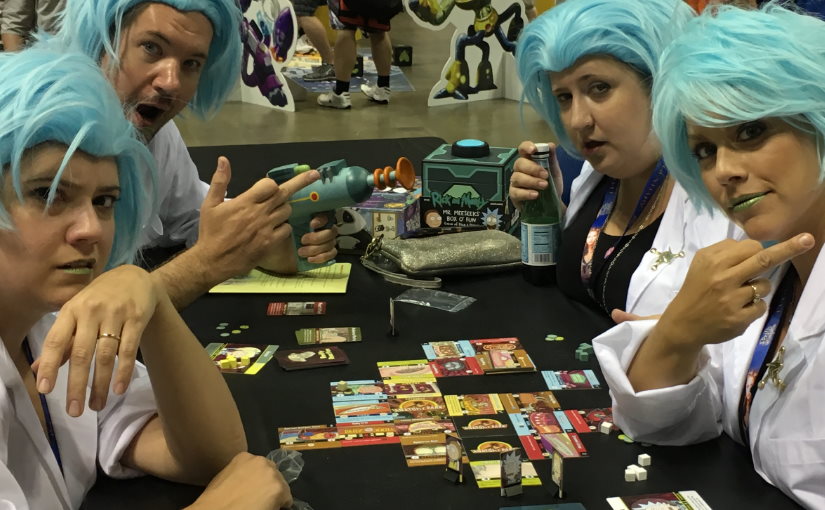 Here we go for another fucking Gencon. When oh when will I learn? The overpriced everything, the MASSIVE crowds (and I mean that on every level) and the constant hunt for the awesome thing– when really this year I would be fine staying at home with a bunch of friends and playing a whole lotta ROOT instead.

That said, I’ll be able to see some homies from across the lands (not as many this year are going), and play some stuff that I wouldn’t ever have a chance to, so that’s good. I think until our kids are old enough, gone are the days where a whole shitload of us would ditch the kids for the weekend and go down for all four days. It may be better to go back to what I used to do: drive down Friday, stay saturday and leave Sunday. Ahhhh well, in a moment of weakness and Maat’s prompting, I’m in it for all four days.

Events! I’m in what should be a very cool FASERIP miniatures Free For All battle. I’ll post impressions and the rules and all that shit when I get back from the con. Second I got into the Keyforge tournament, which should be ridiculous. RPG-wise we are in a Mutant Crawl Classics game and a game of Mythras on Saturday morning at 8 AM (let’s see if we make this one).

Most importantly though is the self run SHADOWFIST DRAFT! I got together all my remaining boxes of Shadowfist and we have a few people ready to draft and play. It’s going to be a real shit swarm of decks as we are starting with:

Standard Starter – Absolute DRECK of cards, the lowest of the low. When I look at this stuff, I’m shocked that Shadowfist survived after it’s first Limited run…so much garbage.

Boosters of the following:

This should be enough to get a semi functional deck out of and we have pods of feng shui and foundations. Should be a great time, if we can only get a couple 3-man tables anyway.

So see you after with pics and other nonsense. Luckily I can’t spend much money on anything, so there won’t be the horde of crap I come back with this year. Hoping to find a decently priced John Company, Conquest of Paradise or Fire in the Lake, but that’s it.