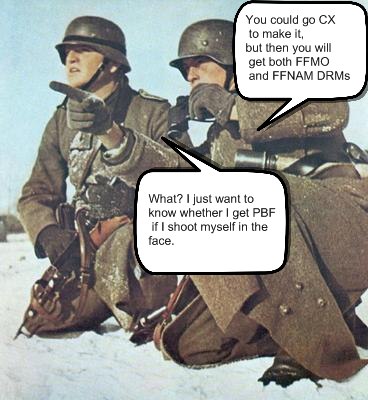 I spent 30 minutes Wednesday night rearranging AT-43 army lists and setting out the minis as board game night was just two this week.  Yet, instead of the gorgeosity made pre-painted plastic and massive 3-d Space Hulk terrain boards (good job Mouth), my friend wandered around my basement perusing my collection of games until I opened a random drawer and said: “Hey, how about ASL?” half jokingly.  I winced when he said “OK!” without hesitation.  “ASL The premier game system of tactical-level World War II combat uniquely combines soundness of design with attention to detail and ease of play.”  The last part?  Really?  The last time I tried to play, we stopped after the first Defensive First Fire phase (i.e. about 10 minutes into the game for experienced players after set up) and my head was spinning.  While both of us that tried it that first time are hardcore miniature gamers and myself (embarrassingly) have played hundreds of hours of Close Combat from Microsoft, we just didn’t get it– not in the least.  The rulebook sat in my basement shitter for about a year and was perused here and there with still not even the gleam of understanding. Then it went back in the box for an undetermined length of time until last night when, hand in hand, were able to ditch the mental flaccidity and get straight up inside the ASL.

Adding a few beers, a general disregard for the minutia of the rules and just rocking through the phases allowed both of us to get the game-at least on a high level, without support weapons, using a scenario with low counter density, and making constant, probably game changing, rules mistakes.  What’s more, we were both able to see clearly why the game of ASL has survived for going on 2 decades: it’s fucking good.  The array of extremely painful choices you have to make during the game are astounding and even the most basic scenario we played gave us a deep colon of tactical depth to plum.  It basically starts with a few American squads in the middle of a town as the Germans advanced through the woods to the south, then reinforcements come on the battlefield,  squads run to wood buildings in the town and shoot at each other, then some run away and a few are eliminated. That’s it.  How could cardboard pieces on a piece of colored cardboard compare to something like Company of Heroes? I’ll tell you:  tension, almost ZERO down time (this is key) and a really elegant means of determining LOS and fire modifiers made a scenario that we had played in tons of different games since Saving Private Ryan came out uncannily compelling.  I’m not sure what it is, but I want to bend back the rulebook and get up inside the ASL again.