I’ve had my eye on YOMI, a card game that emulates video game fighting games in paper form for awhile now.  I initially assumed there was no way anyone could make an actual fun game out of this.  From experience as I’ve tried two of them from the olden days (Video Fighter [below] and Heavy Gear) as well as the goo,d but too simple, Brawl.

YOMI is available to play online and I gave that a go and it was just OK, it piqued my interest further, but I didn’t think it was all that great from playing the online version, which is exactly the same as the card game except you can’t read the cards.  You can technically read them, they just aren’t the focus of the game enough compared to when they’re in your hand.  This is huge detriment for a new player because I can say after playing the physical game that YOMI is absolutely superb at pulling off what it’s trying to do and it’s not well represented in the online version since the cards are small and not in your face.  So if you are going to give it a try, I would recommend playing with pieces of paper first.

The core mechanic, well it’s just rock paper scissors between Throw, Attack and Block/Dodge.  Seems simple?  It’s crazy complicated.  The rock paper scissors part is just the most basic mechanic. You play a single card each turn. Based on what you played and your opponent has played you can possibly play more cards to combo, extra defense, etc. and this is where the game gets crazy and the rock paper scissors mind game turns into a mechanic that works brilliantly instead of putting you to sleep as it should.  Each character deck that I’ve seen (played about 6 of them) plays very differently.  Some characters are good throwers, some rush down with tons of small attacks and combos and others  set you up for a big hit the whole match.  After just a few plays, one notices the huge depth of the game.

Hand management is huge, card flow is huge, and knowing when and where to lay down your big combos is something that will take hundreds of games to master.  I am simply shocked that someone was able to pull this off and do it so brilliantly. 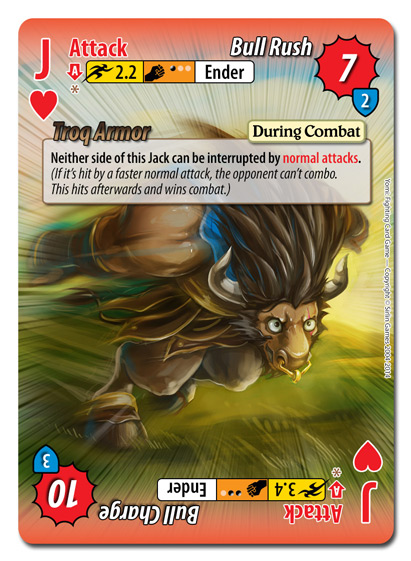 As a game, once you have a single deck of one character, you can play– forever.  That character likely will never get any other cards you can buy (unless there is a team fight expansion that changes out cards) so if you just want one character to play, your cost of entry is 12$ and never anything else.  You could enter a tournament and win and be a champion with just that 12$ spend as YOMI is not about buying up cards and making decks like Netrunner or Shadowfist then playing, it’s about learning a character completely, just like a fighting game on the boob tube.

I’m not a huge fan of the art– it looks sort of like knockoff anime to me rather than the real deal, which Video Fighter and Heavy gear also had issues with. The overarching brand is ‘fantasy strike’ so it seems like the characters in the game are in some sort of Lodoss War style world. And a Panda? I guess… again, a minor quibble, especially since many of the characters are really awesome looking— they’re just not Last Blade 2 awesome.

Those of you physically near me, trust that you will be coerced into playing despite your hatred of fighting games.