This is a unique little Con as it harks back to the era where Wisconsin was ground zero for all D&D stuff, with THE DUNGEON shop (basically the D&D store with the TSR office upstairs), the qtip factory, etc. all around Lake Geneva, where some of these TSR guys still live and still show up to Cons!

So if you do not know, Garycon is a small con at a very cool location, the Grand Geneva Hotel, at it’s worst point in the turn of seasons (end of March) when the snow is gone and the warm weather (even for hiking) isn’t around yet.  40’s and rain is what we got again this year, unlike Game Hole Con which was absolutely gorgeous out all weekend in November!  I think that Game Hole and Garycon bookend each other quite nicely at their times of the year though, where, typically, you ain’t going outside for summer or winter sports at all up here.

This is an OSR con, which means Dungeon Crawl Classics, Swords and Wizardry, Lamentations of the Flame Princess, Into the Odd, Trampier art, Castles and Crusades and a lot of old dudes.  One of the guys I was with mentioned that the demographic was, for the most part, 20 year-olds and younger, and late 30’s and older with the entire millennial generation not even there.

That said, while all about OSR, DCC dominates this con as far as I can tell. They have a huge booth in the small exhibitor hall and while there were tons of people playing 5E, there were also many DCC tables everywhere.  I think one of the reasons DCC does so well here is that a lot of the old Wisconsin/Northern Illinois TSR designers are involved with Goodman games (and now even WOTC with their partnership announcement this weekend on the old school modules).  Goodman does judges guild reprints AND their own Californicated OD&D DCC stuff, they do a rebirth of Metamorphosis Alpha AND their own Mutant Crawl Classics.  So they are pushing ahead with their own games while at the same time not only bringing back some of the oldies, but adding new content from the original authors.  This makes the OS (without the R part because they likely never stopped themselves) happy.

We got to play DCC twice with Daniel Bishop as the Judge. For our first game our gang of freaks was nearly half the players there, which was totally awesome.  I had run a funnel and read modules, but never played the ‘leveled’ version of the game before and I am quite impressed with the rules in play.   I played a warrior, Sensless played a magic user with all BUFF spells and Maat played the only thief,  bowers another Wizard.  The game is dominated by the magic users for the most part (which is very anti-vancian/gygax), but they destroy themselves to pull off what they do and still have to rely on the dice–nothing is every certain no matter what you spellburn.  What it comes down to is trying to maximize chances of a certain spell result using spellburn, corruption, the halfling luck power and personal luck. How it works out in play is basically full on gonzo, where the GM can lay heavy stuff on the players and they can come back from the brink with clever luck/burn/corruption usage — but it’s very costly.  In a CON game Wizards are not going to hold back on the burning for results, so shit will get crazy.

Fighters are awesome however.  They take a beating as expected, but instead of flat bonuses, they get a DEED die with which they can declare a heroic deed, like pushing someone to the ground or dry gultching them if the die comes up 3+.  This allows a lot of creative play for what is normally, even in 13th Age, a bit of a boring class outside of Runequest/Mythras.

My second game I coached my kid through and it was great with a very strange premise in a deathtrap dungeon, which he had never experienced before.  I talked to him after about how the horrifyingly deadly traps were telegraphed by the description of the area, and the non-telegraphed ones were fairly easy to get out of.  Unlike the funnel games, leveled characters in DCC are difficult to kill off as long as the rest of the party is around– but his party had nearly all the spellcasters drop to zero at least once and I would have loved to see some of their character sheets to see how bad their stats were with all the spellburn and voluntary corruption! 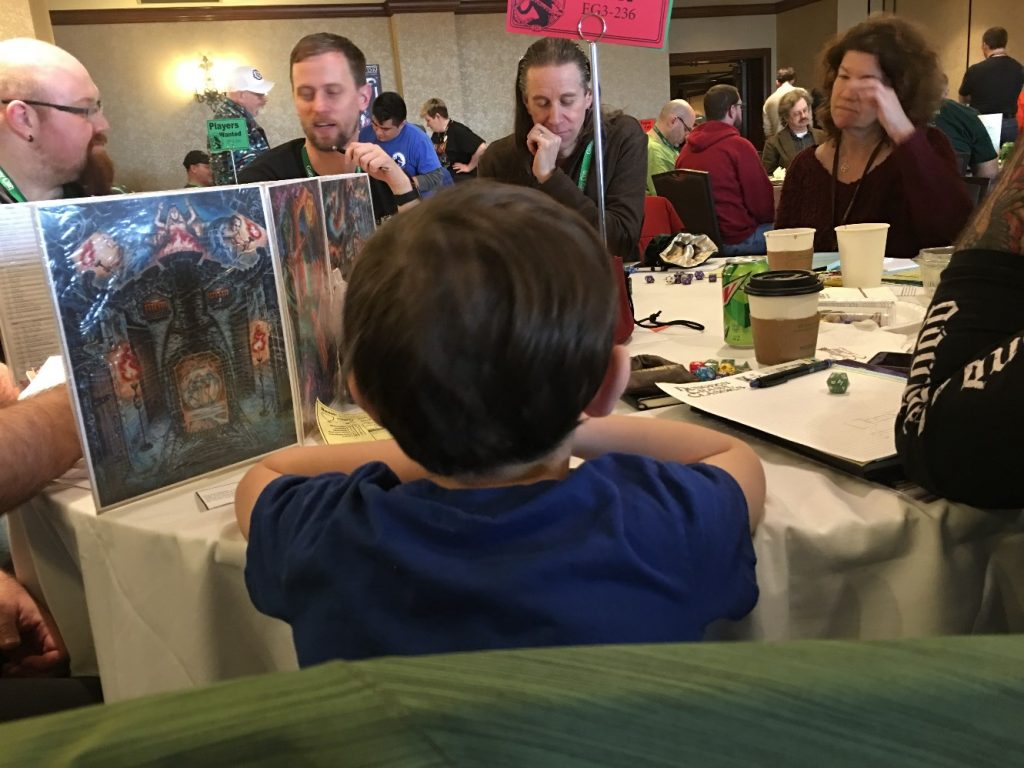 Other stuff I saw and did: