Fantasy Flight is going berserk with new game announcements this fall– and this is an absolute shocker, first because it’s so obscure and second because it’s not the best old game out there by far: 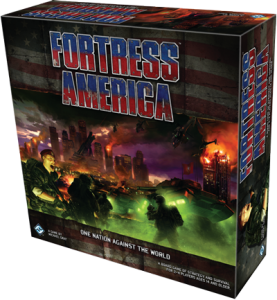 I played this once in 10th grade and I have to say, aside from the ridiculous 80’s setting, that was plenty for me.  There’s apocryphal and there’s “apocryphal”…  However, it’s good to see the MB big box (Game Master Series) games getting some love.  Shogun/Samurai Swords came out again as IKUSA and both Axis and Allies and Conquest of the Empire are still in print.  With this game FF can really do no wrong with the development of the game– they’re not going to have a legion of fans complaining about how it deviated from the original with Fortress America as it wasn’t all that great.  You can really see FF’s Petersen reliving his childhood via these old rehashed games though, and since I’m just a few years younger, I can get behind it!