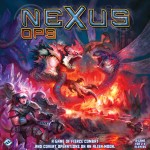 If you already have the Avalon Hill version of the  game, like the glow in the dark figures and don’t think the gameplay needs to change at all, other than hoping for a steep drop in price for the old version to pick up a copy, what would entice you to buy the new version?  New variants and components to support those variants is a likely answer.  In FF’s preview post, they detail the Vortex variant that moves around the map (a bit like the storm in Dune) and can pick up units and place them around the board, incinerate some and give energize cards to players who have stuff nearby where it lands that survive.  Not a bad little random chaos thrown in– the key is if you can score VP’s somehow by using the vortex to your advantage.

Something is odd though– take a look at how the home mining areas are placed on the board with one hex hanging off– this is quite different from the old version that has them flipped the other way in a 4-player game.