Sacrilege, I know, but I hated Arkham Horror.  Played once with 6 players and it was a fucking disaster mess that took forever and got nowhere. I was hoping every single turn that the game would be over.  I’m not sure if it was the Fantasy Flight version or what, but it sucked… bad.

Now let’s talk about a Study in Emerald.  It’s a Wallace game, so I’m biased a bit from the outset, but let me tell you this is a fantastic game that really turns both deck building (which are mostly all CRAP) and cooperative play vs the board into an extremely compelling experience of fuckery.  Like Bang or various werewolf games, the players don’t know which side they are on at the beginning of the game and cannot know for sure until there is a reveal.  Players must watch the other player’s movements in the game to determine which side they are on, and may take action with false or misleading information.

That said, this is not all mental fuckage, the game mechanics are extremely solid for something so chocked full of stuff. Part of the game is bidding, part tile buy, part area control and some light combat.  All of it adds up to what at first seems an insurmoutable pile of special rules, but the play is actually quite smooth and easy– offering tons of tactical and strategic choices each turn.  While this is not a review of the game per-se (especially after a single play) this game got my gander up from a gameplay perspective.

The theme of the game– a sort of Cthulhu/Sherlock Holmes mash up with all sorts of late 1800’s references and characters works really well when at first you’d think it would be completely stupid.  One faction are the loyalists to the Royals who are actually various Cthulhu monsters and the other are revolutionaries trying to free the world from these insidious alien powers.  You play as agents involved in a shadow war to either help or hurt the “Royals.” I found it familiar yet strange and mysterious at the same time.

On the cover are two men standing over a tentacled body and the word REVENGE in German is written on the wall behind.  To me, this is a game made as revenge for all the people that had to sit through Arkham Horror before a Study in Emerald came along. 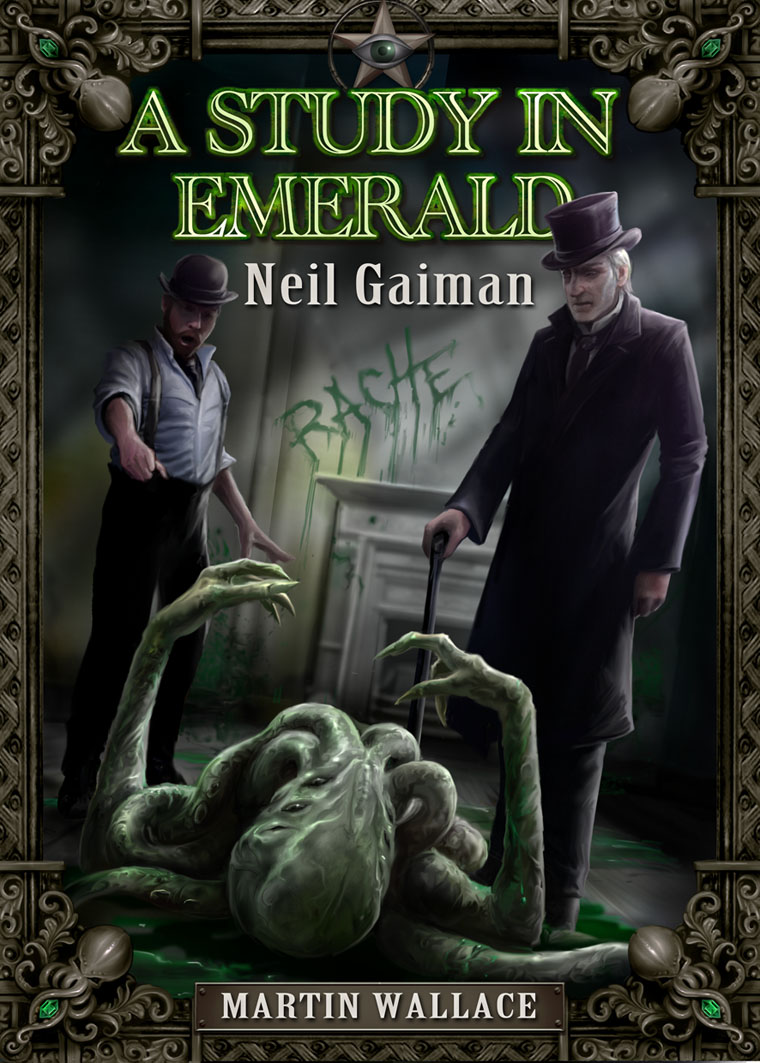