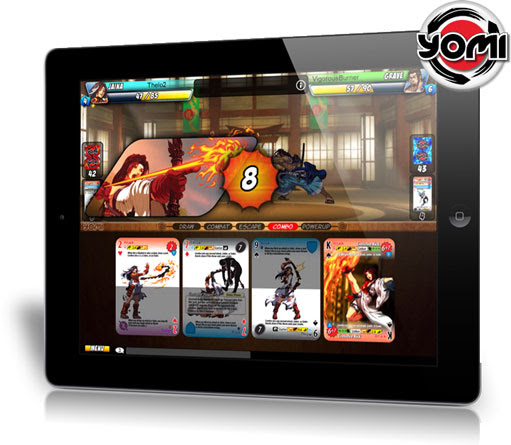 Awhile back I had the opportunity to play YOMI face to face with another living human being.  Later, I played via an old dead technology killed by Steve JOBS ,called FLASH, on a personal computer.

I discovered later that the creators of said game, YOMI, had built a piece of software for a more personal device called an IPAD that allowed users singly or in pairs play this game via this device.  This was found to be fantastic news by all.

YOMI is for those of you that are intrigued by fighting games such as street fighter, virtua fighter, blazblue, jo jo’s bizarre adventure, time killers and World heroes perfect but don’t have the dexterity or desire to learn all the moves, get your ass kicked for months and months before winning even one game against another human being, etc. It is a TURN BASED fighting game that does an amazing job of emulating the genre. While I don’t think the character designs are all that strong (there is a fucking TAUREN from WOW in there…), the gameplay is really something to experience. At it’s core, it’s rock paper scissors, but once you play even a few games, you can have a view into the crazy depth of this game. Once you start to learn a character and beat the living shit out of some people with them (and vice versa) you come to know just how awesome this game is.

Someday when there is no more electricity or power we will be able to play fighting games via YOMI with cards, but for now, get it on the ipad.