Had to wait an extra week to play but here we are with the 2nd World of the Lost session report. Here is the first session.  As this was a playtest as well, I went in a different direction this time with a straight up fuckall deathcrawl compared to the open ended city session last time.  This was not what I was expecting to run when I first set out to do the playtest, but here we are.

Characters.  We only had four for this session.  One player bowed out because he said he can’t play RPG’s on roll20 and one no-show.

The characters woke up tied with vines outside of a ruined temple after a night of carousing in Khirima.  They woke to the screams of another of the Portuguese  from the caravan they had traveled with crawling on the ground with his tongue cut out.  Above him stood a tall, severely pregnant African woman with a wild wreath of red hair holding a bloody knife.  The very Ekene they had been sent to kill!  Around the crumbling stones and edge of the jungle were Ekene’s retinue, many with Leopard kilts, long spears and some with steel drums.  She seemed displeased.

She watched the characters slowly wake up to the sounds of the jungle and mid-morning sunlight flitting through the canopy and then told them (in Hausa at first, which none of them spoke since the translator was still passed out, then broken English) that they must beg for their lives for even thinking of harming her.  They babbled excuses at her that they hadn’t done anything and after a few of them actually begged for their lives, she called her guards over to remove a large slab from the steps of the temple.

Musty and chilled air poured out over the temple grounds, and the characters were untied, given their weapons and equipment and bade to go into the black space under the tomb to bring out anything they could as repayment for the offense given by their plotting.  While they had their pistols and weapons, Ekene confidently turned her back on them, basically daring them to strike her, and went and sat on a portable couch to watch while getting fanned by her retainers.  The drummers started up and the characters put their armor on, loaded their pistols and descended into the darkness.

The tomb was chilled and the air heavy. The stone of the temple was impossibly smooth granite and this caused some concern as they hadn’t seen anything like it in Khirima. They hit a wrought iron door first that Udo unlocked easily (a fighter who had +3 tinkering). This lead to a small, empty room with bas reliefs of priests worshiping a humanoid in long robes with a crow’s head.  They hit another iron door, but this one was not locked…

In the hallway beyond this door, the characters started to learn that Ekene wasn’t the nicest person.   Bernard fell into a pit trap and took 8 damage (I allowed a WIS save), and as the group pulled him out of the pit, Van Hagen hit a tripwire and was hammered by a swinging log on a chain from the ceiling  (taking 3 points of damage– I’m listing exact damage cause it’s important later) and barely missed being thrown back into the pit himself (I allowed a WIS save for this as well).

Beyond the trapped hall was a large tomb complete with a sarcophagus, and two steel statues; obviously some sort of protectors of the tomb.  Bernard threw his throwing axes into the room to see if he could trigger a pressure plate, but to no avail.  When he went to pick them up, the statues came to and after their long wait for intruders to pummel, started attacking.

Bernard used the (new) Guard action to hold them off and to push his AC up to 19.  Down to 2 hp it was lucky the statues didn’t hit him. This luck will run out.  Meanwhile, the other characters prepped the log to try to swing it at the statues as they came through the hall. Stuck between the pit and the statues wasn’t the most pleasant place to be!

Rainer had Shape Stone (a 5th level spell), so when Bernard ran back into the hall to kite the living statues into the log, he cast it on a block of stone above one of the statues and pinned it to the floor for a bit.  Meanwhile, the other statue got the log directly in the chesticle, and was thrown back into the tomb.   Rainer fired his brace of pistols at the one he had pinned, but to little effect except a misfire that he burned his session Luck points on (also to no effect), so Udo then used his mancatcher to toss it into the pit, destroying it, and they hammered the other one with the log again.  Great job in the combat as there were no attacks with normal weapons (other than the pistols).

The guardians down, it was time to loot the tomb.  The characters did a bunch of search rolls (luckily no wandering monsters) and found a trapdoor made of stone at the top of a dais, and a small keyhole in a sarcophagus. After many failings at rolling the dice,  Rainer decided to simply Stone Shape the trapdoor, and things went quite awry.  Being his second spell of the day, he had to make a Magic save with 5D6, which failed and the spell was miscast!  An alien light filled the tomb and all characters re-suffered their last damage.  Bernard was  killed, and Van Hagen was down to 1 hp.  Since they had never taken any hp of damage, Udo and Rainer both doubled their hp.  Udo up to an incredible 14 hp (at first level) and Rainer up to a WHOPPING 2 hp.

We had to call it for the night.

Needless to say, there’s lots of room for stuff in World of the Lost.  This tomb fit in pretty well for a non-plateau encounter.  I like Ekene, pregnant and fucking pissed as she is, and she ain’t one of the main module characters as written, but she is in mine!  World of the Lost has “make this your own” all over it without that making being a lot of work.  While this was just a two session game, and didn’t even scratch the surface of the content, so I’m looking forward to going back to the World of the Lost again.

This is a 0.1 playtest so there are some burrs. I like the spell system, but it’s a bit strange as players have zero control over what they get, a bit like the Arcanum from Into the Odd. I’m used to miscasts from WFRP and especially 8th Edition Warhammer Fantasy Battle so fuck yes to that. However, I think nearly all the spells need to be rewritten to fit the totally random method of selection. A daunting task and one that might fuck with backwards and forwards compatibility.  Of note as well, if designers are building adventures, it’s possible that they would assume that parties may have specific spells at certain levels. With the no level requirement and random spells, this may be impossible.

Frankly I would just directly steal the Warhammer Fantasy Battle cast and miscast rules.  The MU has a pool of D6’s based on his or her INT score (calculated just like the CHA and WIS saves) except these are used to cast spells. The formula would be XD6’s + level vs spell’s casting number, X being the number of dice the MU wanted to use to cast a spell.  Casting number would be the number of pips needed to successfully cast a spell. 1st level spells are cast on a 6+ for example.  MU chooses the number of dice they want to use from their pool (say they have a 2nd level spell that casts on a 7+, they might use 3 dice giving them a 9 average roll + their level to hit the casting number).  Spells never go crazy if they fail to cast, spells only go crazy when the power used to cast them is too much for the MU to handle!   If two 6’s come up, you roll on the ‘really bad’ miscast chart.  No matter what, the spell is cast if two 6’s come up, but other stuff happens, bad stuff (see picture below).  A 4th level magic user (with a +4 base to the casting roll) would rarely need to roll more than 1 die for 1st or 2nd level spells (D6+4 vs casting number of 6 and 7 respectively), so would have zero chance of a bad miscast.  Even with 2 dice to make sure, the chance is very low.  A 6th level magic user would never need to use casting dice to cast 1st or 2nd level spells.  The magic dice pool is refreshed every long rest the character takes that would also give back at least 1 hp. 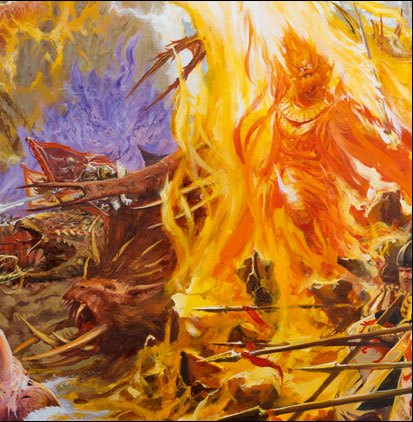 Combat was fine, I’m not sure about the new armor rules  so just went with the old version.  The guard action seemed to be of use but there is both a firearms and ranged ‘combat style’ that seemed a bit redundant.

The skills are interesting now that everyone has them, but I think the Luck skill is by far the most important skill to get.  It can make impossible rolls possible and help the specialist be able to use every single skill in the game with just a small spread of points (by level 13, a specialist with points in luck left has statistically 100% chance of success in all skills if he spread just 3 points into every skill there is). In addition, if Steve had saved his luck for his miscast, things could have gone better. So rather than INT being the go to stat for Magic User, high CHA and Luck is the ideal to keep those miscasts off.

A bit we didn’t like was the -4 hp save/partial save mechanic.  at -4 HP, while the full save equals ‘passed out but survives,’ the partial save means the same thing as a failed save: death with no chance of healing or recovery (it just takes longer).  The feedback loop of a partial save (not that easy to get on 3 or 4d6) makes it feel like it should be a better outcome, like you are out and will die in 1d10 rounds, but can be saved by another player somehow.  Also, the death saves are based on Wisdom (non magical), which was a bit odd.

Damage healing was very harsh in the new version, especially with no clerics and no access to healing magic except randomly.  Expect characters to drop like flies if they get into combat after combat.

Lastly, I had to make saving throws for the monsters and didn’t know how many D6’s to roll. They can no longer ‘save as a fighter of X level’ anymore (X=HD).  Maybe I missed something in the book.

My biggest issue with the playtest packet is that I put the LotFP current ruleset on a high pedestal for my D20 gaming.  The rules are really perfect for the style of play and totally compatible with nearly everything put out by the OSR (DCC, S&W, LL) and likely 5th Edition as well.  I don’t want it to change as drastically as this playtest doc suggests the new version might.  I just want something that I can use with little trouble if I grab stuff as disparate as Secret of Bone Hill, Idea from Space or Out of the Abyss. I think if the LotFP fans grind on this with long months of playtesting, there could be something great out of it.