Ah the wasted weekend. No not the good kind, you know when it’s Sunday and you realize that all you’ve done is gone to Checkers twice and had sex with your girlfriend 13-17 times since Friday,or been in a single room with smellnerds playing Terrible Swift Sword (note I’ve never done either of these).  This weekend was nothing like that,  but sick like a fucking animal with a fever, hacking dry cough disallowing any sleep at all (literally) and lots of snot, kids screaming and crying. Delirium.  Awesome.  Given that I was in a state of semi-consciousness for almost 36 hours straight, I decided to do something I rarely do– watch movies, or rather, have movies on while I stared blankly into space.    I always watch Ninja Scroll when I’m sick– sometimes on repeat the entire time.  The main character is dying of poison and all the rest of the characters hate each other so much (or pretend to) it just works.  I’m worried that if I ever do watch it while well, I might start to get sick.  However the real gems this weekend were found hitting up the Netflicks for some of the instant view Godzilla movies.

Now, having grown up in the late 70’s, I used to walk every Saturday afternoon to my neighbor’s place up on the hill as they had a GIANT antenna and could get channel 44 out of either Madison or Chicago.  Every afternoon this station would have a double feature monster movie– usually a kaiju one and then a real monster/horror movie after that (which I didn’t want to see!).  My neighbors were good kids but loved giving beatings, especially the oldest one who was in 7th grade. If he wasn’t out shoplifting or trying to fingerblast some bezitted hoyden on a Saturday afternoon, he would grab a bean bag chair, throw me to the ground and then sit on me for most of the film.   Sometimes I couldn’t even see the films (let alone breathe).  The worst was when he would make me watch the movie following the kaiju movie instead of letting me run home– which was invariably shit like Bucket of Blood or some movie with a chick melting in a volcano (I was forced to watch that fucker TWICE)–enough to creep me out for a week or more.

Most of the time he was off fingerblasting and I actually got to see the movies– Godzilla Vs King Kong, Godzilla vs Mechagodzilla, Godzilla vs Mothra, and even some Gamera here and there.  All awesome incarnate, but I really hadn’t seen or followed the Godzilla films since then–except both Godzilla 1985 and the shit-stain Americanized ‘Godzilla’ movie with Matthew Broderick.  Both of these flicks were not too good, and I figured whoever controlled the IP, just didn’t have what it took to get to the same level of awesome the 60’s and 70’s allowed.   I think I was sort of wrong, though the 80’s certainly was not a good period for our radioactive friend, the 90’s (that I always think of as the 70’s 2.0) gave us some good films it seems, none of which I’d seen.

The first flick I watched was Godzilla Vs the Smog Monster; AKA Godzilla Vs Hedorah from ’71.  While not one of the worst Godzilla films, this is an odd one with all these crazy ass people dancing around, some Monty Python-esque illustrated bits and all the Godzilla/Hedorah fight scenes taking place at night– and shot in such a way that you can’t see a damned thing.  I watched this with the sound off, so I don’t really know why all the people were dancing around but it seemed like a bad people-bullshit / Godzilla ass-kicking ratio.  Now I had see this before as a kid– I just didn’t realize how fucking weird it was. 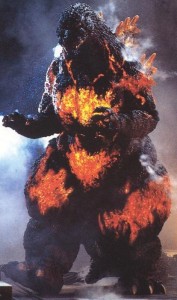 The second was the only newish Godzilla film on instant play: Godzilla vs Destroyah from ’95.  That’s right: Destroyah.  I watched most of it with the sound off, lying in a feverish haze as I was and I didn’t realize that there were actually two Godzillas in this film:  the main one that looked like he had been attacked by red hots on his rubber suit and the other that didn’t have big back fins. Most of the beginning of the film is about this red hot Godzilla being real pissed off and destroying shit and then people talking about it.  Then he gets frozen by some ice ray contraptions on an airplane and sinks into the ocean.  Then the second one shows up on the beach and I wasn’t sure what was going on there.  Meanwhile, some aquarium fish are attacked by some small red crabs that grow into crazy big crabs that shoot lightning.  These crabs go to a power plant, kill some people and then get attacked by squads of swat-like dudes in an Aliens homage sequence.  The swat guys even have the swivel-style heavy weapons that the Marines in Aliens had.  The swat guys take a terrible beating, but eventually they burn up some of the crabs. Apparently there are a lot of them and one of them keeps growing into, of course, Destroyah.

Overall, the monster battles in this one could have been awesome, with some great cityscape models, tanks and planes flying around blowing up, yet piss-poorly edited– one minute Destroyah and Godzilla are fighting close up and Godzilla knocks Destroyah to the ground and next we see Godzilla wandering through the city as if the editors forgot that the two were in close combat, only to have Destroyah fly out of nowhere for an attack.  I honestly though it jumped a reel.  Another example in the same fight: Godzilla gets swarmed by the ‘little’ crabs — one second he’s covered in them and knocked to the ground and the next he’s thrown one (just one) to the ground and then he’s wandering through the city with none of the others around.  Where was the sucker punch from Destroyah while Godzilla is fighting off the younglings?  It doesn’t happen!  Its unbelievable all the effort that went into the explosions and model design (and yes even the acting) only to have the editing fall flat. Inexcusable really. Despite all that, this is a pretty badass movie, for, you know people wrestling around in rubber suits as is the kaiju way.  Godzilla is SUPER pissed off in every scene he’s in– obviously in terrible anguish as he’s all red hot with radiation. Both the special effects and direction did a fantastic job with this there’s little confusion to the viewer that GZ is out to just terribly fuck shit up all over the place.

All in all this wasted weekend whetted my appetite for more Godzilla flicks– especially the most recent ones (Final Wars and the mega titled: Godzilla, Mothra and King Ghidorah: Giant Monsters All-Out Attack –  yes that’s the title).