Took me (from the point of install) about a year to finish off a full campaign (really only a couple months of play once the emperor edition came out) but there it is, the first Military Victory. 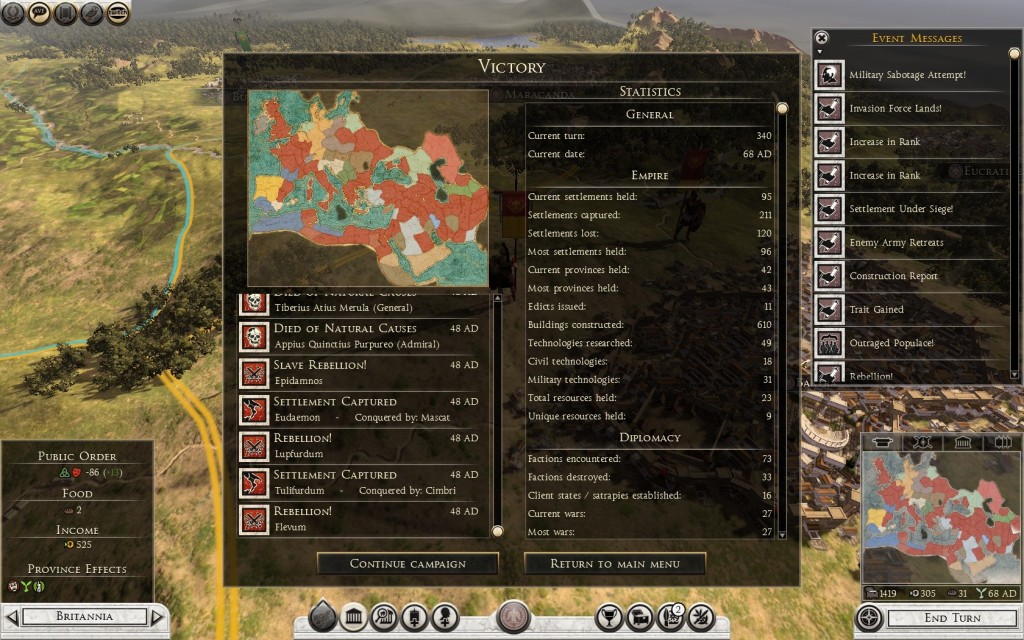 Some Highlights of the game:

I took out Carthage very quickly, which was good but from that point on, your focus goes from local conflicts with the Cisalpine Gauls and the Etruscan League to you being a Mediterranean power that has to watch EVERYBODY. I was literally at war from turn 1 until the victory video displayed.

Syracuse is the key to the Mediterranean. While playing you can see why Rome and Carthage fought so hard for this island.

Lybia and Egypt were just too succulent of fruits to NOT instantly destroy after Carthage, but being both allied with the Persians (and the entire Achaemenid Empire by extension) I was pulled into an Empire vs Empire war very early on. It was brutal, with the entire Levant constantly swinging back and forth. It didn’t help that Alexandria isn’t exactly a military base…

I left Greece alone for too long and Athens got uppity. I had to divert a lot of forces to conquer Greece from the attacks on Persia, and then immediately got in a fight with some sort of Thracians north of Greece that was annoying. I think Athens was sacked back and forth a few times before I was able to settle them down. While Gauls are pretty easy to beat as the later Romans since they cannot stand up to the heavily armored legionaries, the northern Greeks are pretty fucking tough with crazy good cavalry and, of course, solid walls of pikes.

With armies completely focused on the East, I had to watch the Gauls in the north and what was happening in Spain very closely. I could relate to why Rome pre-emtively attacked everyone! Luckily when I did get into a fight with one of the smaller Gaulish tribes I wiped them before the others joined in and was able to maintain an area of intimidation.

I found the AI to be quite good with diplomacy, some cultures/states just fucking hate Rome and will never surrender or even stop a war. Many that aren’t so hateful that know you are coming to destroy them and feel they have no chance will offer up $$ and become a client state. Client states work fairly well in that they can be a distraction enemy factions and can help clean up your provinces of enemy raiding armies that get through your lines.

I didn’t use my navy all that much, which was a mistake. I should have flooded the Med with ships and locked down everything, but I was so focused on the Persians, which took FOREVER to resolve that by the time I started turning West, my fleets were still shite.

Rome was really fun because of the mercenaries and especially the Auxiliaries. You can get Auxiliary Meade cavalry, Auxiliary horse archers (critical) and all sorts of others, giving you the ability to build some EXTREMELY diverse armies. Let’s face it, the legionaries + vilites are a good combo, but they can be beat by the Parthian/Persian style of combat in the open field.

Tactical note: ALWAYS fight your own defensive siege battles. Many times when the computer’s autoresolve was telling me I had no chance, I was able to slap the shit out of an attacking army during a siege (even of a small town with no walls). Just remember, your llegionnaires are DEAD FUCKING HARD and can bottle up a unit attacking them from the front for a long time.

So I have been hitting Total War for awhile now and will mount it all again when Attila Total War hits, hence it’s time to get on another type of game.  I need to finish off Dark Souls and really need to work through the expansions of Skyrim as well.  And Witcher, and Witcher 2, and Inquisitor, on and on…