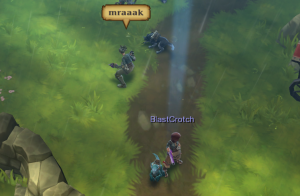 Let’s get a list of people up for the Elite hardcore blind run (as in, hardest difficulty, one life, never played the game before) when TL2 comes out next week.  As far as I know, it’s max 6 players per game, so if we have more than 6 (unlikely!) we can split into two groups.   The only rule is that you cannot play the game at all before your hardcore character bites it (and they will bite it!).

Now– some of us that got to play the beta in May will effectively be cheating until the first big boss (which only one person got past).  To make it fair, we will tell you when one of the three points of likely death are about to happen.  There’s one main quest point, one optional quest area and, of course, the first real difficult boss.  That should even it out a bit.

So if you are up for it, reply to this post and we’ll try to get things rolling about 7-8PM Central time on the 20th (unless stuff is out at midnight…).