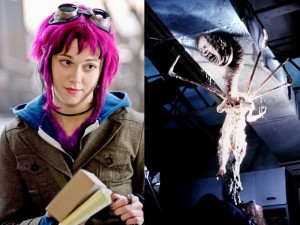 I’m not a film guy but have to make a lengthy post about The Thing prequel as the ’82 version is one of my favorite films, so don’t try to stop me!  This has spoilers all over the place.  If you haven’t seen it and are going to the theatre, don’t read this.  If you are waiting for it on netflix, you won’t remember any of this anyway so read on.

The new film takes place days before the ’82 film, and deals with the Norwegian outpost’s run in with the Thing before it gets to the American base and fights Snake Pliskin.  In the new film, there are four American actors, Ramona Flowers as the lead, and three other dudes, (though the black guy has an African accent) with the rest of the cast being Norwegians with beards and one with a GIANT red beard.    The main questions if you’ve seen the old film a lot are:  How did they find the Thing in the first place?  How did they find the Thing’s ship?  What did they try to do to the Thing to get it all pissed off?  How did they mostly die?  How did two survive to chase the dog?  Why did the guy in the radio room kill himself? And the big one– if there is a mainline actress playing an American character in prequel that does NOT show up in the original film, what happens to her?  Outside of the story, the question needs to be answered: will the CGI Thing suck?

I can answer the last question right off the bat; the Thing itself looks incredible and you can barely tell it’s CGI at all except for a few parts.  What’s more, there was obviously some model building in a few scenes as the actors had to interact in ways with pieces of the Thing that could not be handled with CGI alone.  This was awesome.

The acting.  This film hinged on Ramona Flowers’ character.  I don’t even know her character’s name but just kept calling her Ramona or Winstead in later discussions after the film.  This could have been a very gritty, nasty foreign piece of work like Das Boot, all subtitled and just a Viking brawl against the shapeshifting Thing that tears people up– however, with the rather fragile, young, hot, female scientist as the lead protagonist, also being an American, they went in a different direction with the tone because you couldn’t rely on Snake Pliskin kicking ass in this one–she had to think her way out of most of her confrontations with both the revealed entity and hidden one.  It also doesn’t work to have her in violent conflict with the different factions of humans that grew suspicious of each other.  She takes violent actions when others do not because she knows what the Thing is more than they do and they look to her to help them not die.  If there was a comparable character from the old film, it would be Wilford Brimley’s guy (the scientist that went crazy and tore up all the radio room with an axe and later became the last surviving piece of the Thing that we know about).  The supporting cast of Vikings do a fine job and you feel affinity for some of them, especially Lars or “he who has the grenades” and are sad when they get destroyed by the Thing because you KNOW these guys are grist for the fucking mill right from the outset.  I was especially sad about the red beard guy as his beard alone should have been a pass for him to survive!  As I noted in an earlier post though, the film is essentially Ramona Flowers Vs the Thing as this conflict is central to the story.

So these Norwegians find the Thing in the ice, and the ship.  They bring Ramona Flowers to Antarctica as a some sort of scientist that knows how to thaw shit out of ice without damaging it, so that’s where she comes in along with some nebbish American research assistant and two pilots.    When they get the Thing back to base in a giant ice block, there is a decision made by the lead scientist to drill a hole into the ice and get a tissue sample, this is contradicted by Ramona Flowers, but she is rebuked.  Later the Thing wakes up and is real pissed.  This is notable because we, the audience, wanted to see direct correlation from the head scientist’s decision to drill into the fucker and it waking up pissed, but I did not get that from the film as I see the Thing as totally dormant before it started to thaw out, not being able to feel itself getting drilled into.  Taking quotes from the old film, Wilford Brimley states that “every part of it is a whole” but in the ice, it’s one big piece.  This begs the question whether the director intended for the pieces of the Thing to be able to communicate with itself when not connected.  I think the Carpenter film distinctly shows that it cannot.  I’m not sure if they were trying to convey that the drilling correlated directly to the initial attacks– but they could have.  Otherwise that drilling scene made no sense to have in the film except to establish the lead scientist as a douchelordian.

That said, there’s not much waiting for the bloodbath to start, and it’s good.  The thing is chitinous to start, but begins to look like people more as it absorbs them through the film.   The pacing is fast and there are too few great scenes where it’s creepy slow stuff, but one in particular dealing with Ramona finding some tooth fillings that is probably my favorite scene in the film.   If they had a couple more of these, I think it would have been a better film.  They build up the who’s who schtick, but the Thing appears and kills people so often that it’s tough for the paranoia and confusion to really grow.

When the fighting starts, it’s clear that the directors deviated from the original in that the Thing is extremely effective at weaponizing itself during combat (i.e: quickly).  In the old version, when they got the Thing exposed, it was fairly weak at fighting, and would obviously rather run away and hide than get burned up.  In the new film, the Thing is able to quickly create chitonous limbs that shoot out and kill people, tentacles that have barbs on the end and really rack up the body count NOT by having multiple human-Things attack at once, or getting people alone, but by straight up duking it out and hunting down the survivors.  This may be in contrast with the protagonist, who really is just a scientist girl with no combat experience who is fundamentally too hot for the audience to see die on screen.

What’s more, the Thing in this film is NOISY, it makes all these noises when stalking around or attacking, really making it easy for the humans to know where it’s at.  Again, you could chalk this up to the Thing’s first exposure to people, but really, if you are trying to get the humans alone so you can take them out one by one, why would you ever want to make any noise at all?  Maybe since this was the first exposure to people, it didn’t even know if people could hear, but that’s a stretch.

The Norwegians and Ramona seemed to figure stuff out fast, real fast, probably because the killing starts quick, and not all of it coming from the shadows– there are quite a few fights out in the open with the Thing, both adding to the body count and giving the CGI guys a chance to make some REAL crazy shit with the human bodies.  The flamethrowers come out real quick and again become the weapon of choice against the Thing.  In fact, they cover essentially the same progression of the original film in about half the time because the storyline moves off to other stuff*.  There’s some stuff in the dog kennel, everyone gathered in the rec room,  everyone standing around a big fire that’s burning the thing outside talking, people running in to put out the fire on a burning thing that (like the first film) are obviously pieces of it, a burning Thing breaking through a wall into the snow (this is in both of the previous films so they had to do it).  So, having only a few characters left and not near the end of the film, what could they do?

*The ship.  The Thing hauls ass back to it’s ship after getting pieces of itself burned up and the protagonists follow.  This was something I didn’t expect to happen and lead to the only scene that I really didn’t like too much.  We questioned after the movie why it didn’t just run away to the ship instantly and why it crawled out and froze in the first place if the ship worked.   The scene I wasn’t a fan of was one where Ramona is wandering around the ship and gets ambushed by the Thing.  Remember, per the previous film, the Thing gets you alone and then sneaks up on you and you are dead.  Well the Thing in this scene, aboard it’s own ship,  SUCKS at sneaking up.  There were no other distractions for it to worry about not to get Ramona Flowers once and for all, but she gets away.  Secondly, the directors had set up the Thing as highly effective at weaponizing itself rapidly– so even if it didn’t sneak up, it should have been able to take down a single human easily, even if that human was aware (whereas the ’82 film it clearly showed that exposed, the Thing was not a great fighter). Again, Ramona was able to get away.

I could go on, but this review has got to stop somewhere.  I like this film and want to watch it again. It was obviously made by huge fans of the original, which I am.  It didn’t seem to have the layers of the onion that the ”82 one did (with whether or not Childs was the Thing at the end, or who was the first one that got turned, etc.), but they have to wrestle with the fact that the audience KNOWS what the Thing is already.  The intrigue and deception of Thing’s copied people didn’t seem to work as well because the pace was so fast between exposure to the first full on attack and the major (in the rec room again) bloodletting of the cast.  All in all though, a worthy horror film with some great scenes and while part of me wanted that vicious, low budget subtitled Das Boot-style prequel, having Ramona Flowers in there was a good addition as a protagonist and added a lot to the film NOT having her be Kurt Russell’s Snake Pliskin.