I use the phrase “a cascade of space piss direct into [my/your/their] mouth” quite lavishly when describing just about every post-Master of Orion 2 4x space strategy game.   The phrase comes from an advertisement back in the day for Emperor of the Fading Suns that included the phrase “and urinate on them from a great height” which many, many 4x space strategy games have tried to do to ME ever since.

While computer games usually get this moniker applied by default (Sword of the Stars, Mankind, Master of Orion 3, etc.) I’ve especially used it in discourse regarding Twilight Imperium 3rd edition– a game I maintain a love/hate relationship with after getting it with a Barnes and Noble gift card, then selling it off, then buying it again for 20$ at a game swap and picking up the expansion against my better judgement.  I’ve played the third edition five times if I can remember right, and each time was fraught with disappointment proportional to the excitement around finally getting people to agree to play it. Twilight Imperium 3rd edition is a game that really should have been awesome (despite the space kitties)– coming from a publisher and designer of some of the best board games out there.   I was on the fence for many years there hoping that it would be good with more plays — but after playing Eclipse last night, there is no escape from the conclusion:  Twilight Imperium 3rd edition is a message to us earthlings of piss from space.

Eclipse, while superficially similar to Twilight Imperium in that it’s 4x, in space and uses hexes, is a game by some Finnish dude that was the rage at Essen and has rocketed, and I mean rocketed, to the top of the charts on Boardgamegeek.com (at position 7 last I checked)– not an easy task when amazing games like Princes of the Renaissance and Cosmic Encounter hover in the 80’s.  It’s essentially a combined area-control and worker placement game that looks a great deal like the random hex fighting strategy games (initially Kings and Things, then TI, Nexus Ops, Ventura and now Eclipse) that we know and love–and while Nexus Ops is the absolute KING of the Ameritrash style of this type of hex game, Eclipse takes the Euro crown.  Twilight Imperium adds a layer of (bullshit) role selection stolen from Puerto Rico on top of 2nd edition’s Ameritrash base– Eclipse was designed, ground up, to be a Euro game, and has a great deal more in common with Agricola than Nexus Ops.  And while all these Euro boardgamegeek snobs love it and hump it’s leg, not even my Ameritrash-centric brain can deny myself drinking vats of the Eclipse space piss after just my first play because someone came over the ridge with a giant fleet and DESTROYED ALL MY SHIT.  There’s nothing more ameritrash than that, and it’s glorious. 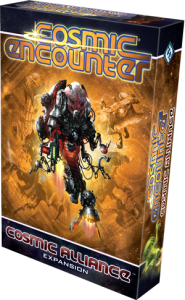 In similar space game news, the new Cosmic Encounter expansion: Cosmic Alliance is closing in on release shooting out all over the planet.  FF has published the rules and another preview so the time is nigh for it to hit the shelves.  After a perusal of the rules, there’s not much new there but 20 new aliens and an 8th player(!).  That brings the total number of aliens into the stratosphere– not quite to the Mayfair version level, but getting close.  A lot of the Mayfair aliens could only be used with Lucre, the worst addition to the game that hopefully we’ll never see in the FF edition.