We had a weekend-long 13th Age session this past weekend with randomly rotating GM’s and character level ups between each session.  I got to go first and had a bit of time to prep before the session.  Some of the GM’s did not know when they would be up, which is admirable. I wasn’t admirable.

I had a  WFRP-like plot set up and written into a pocketmod the week before, but then a bunch of kids were at the house and they were playing Guardian Heroes and I STOLE THE BEGINNING COMPLETELY for the first session …and would do it again.

I built the following adventure based closer to Feng Shui style than to any standard D20 dungeon crawl, which I think 13th Age fits perfectly.   The adventure consists of three fights with connective tissue in between (read as the INTENTION of railroading if not railroading during the session itself).

I used a trick to start the session off that I read in some 13th Age book or module somewhere, where a dark elf pays the characters for their memories… this is to cut down on all the “this is how I know X character” bullshit that bogs down the first sessions! 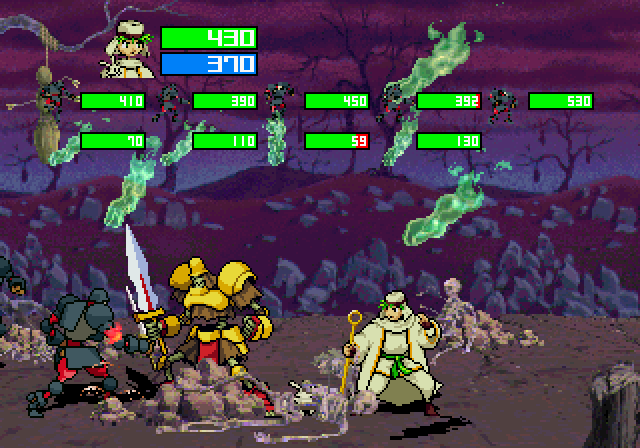 The characters are sitting at a table at an inn (The Unicorn and Badger on Harlot’s Chase in the town of Mudfair are the names I used) and a beautiful dark elf is handing them a sack of silver and jewels and says she would like to pay them for their memories.  The characters will likely say stuff like “mine aren’t that interesting” or “it will cost you more than that,” but of course she means the memories that she has already purchased and in fact they can’t remember anything for the last few weeks except that they have an affinity for the other characters with no memory exactly of why.

She then snuffs a bit and looks around and say’s ‘oh it’s time to go’ and disappears into ash. The characters then smell smoke and have a chance to look around themselves.  They are on the second floor of an Inn and on the table along with the silver the dark elf just left them, is an open stack of gems and gold coins as well as a well-appointed golden sword.

[Characters stole a bunch of stuff including the golden sword from a nearby temple (Zeliel, God of Coins!) and are celebrating after delivering what they were requested to steal to their employers; the sword was INCIDENTALLY stolen.]

Suddenly, a woman in ornate crimson armor (Sauvanne) bursts into the inn and points to the sword and warns the characters that they are about to be attacked and ‘don’t let them get the sword!’ Guards start flowing in to the building and it is set on fire. Characters can run or fight but the building burns around them and becomes increasingly dangerous. The woman fights with the characters vs the guards and suggests a retreating withdrawal.  She will help to pick up any characters that drop to zero, but won’t stay long in the burning building because that would be stupid.

Four guards will scale the walls or come up the inn stairs into the second floor room each turn.

Archers will stay outside ready to shoot anyone they see that isn’t another guard.  They have pushed bales of burning hay to the sides of the Inn as well as setting fire to a few on the first floor.  Bolgar Mangstein and Chamas Mazor lead the group of guards tasked to get the sword.  The named characters will not engage until after escalation 3 and will go into the building until escalation 5 after which they will wait outside for the building to burn down or the characters to jump out.  The Sword is a big deal and all the named characters will take risks to get it, but these two won’t fight to the death.

There are 12 guards and 6 archers plus two named characters.   This would be an easy fight for first level characters, except for the burning building.

Allow a short rest when the characters escape from the Inn.  If they get captured, you’ll have to wing it from there.

Assuming the characters escape, the lady introduces herself (Sauvanne) and explains what they accidentally did by stealing the sword: set off a hunt based on a known prophecy about the local baron and the true power behind the barony: the sorcerer Cantacuzene involving the sword.

If they aren’t too hurt and the inn fight wasn’t too long, on the streets/ running away from the inn they can be confronted by more guards. Just a few should work fine here and if needed one of the surviving named characters from the first fight. This should be easily overcome.

They run (force this part) to the nearby grave yard which is ancient and larger than the village itself.  It has ancient barrows upon which gravestones and mausoleums have been built.  Sauvanne will suggest this as very few people frequent the graveyard…

I had many guard parties to be avoided in the town as well as knights riding winged mechanoid wasps searching through the town from the sky. 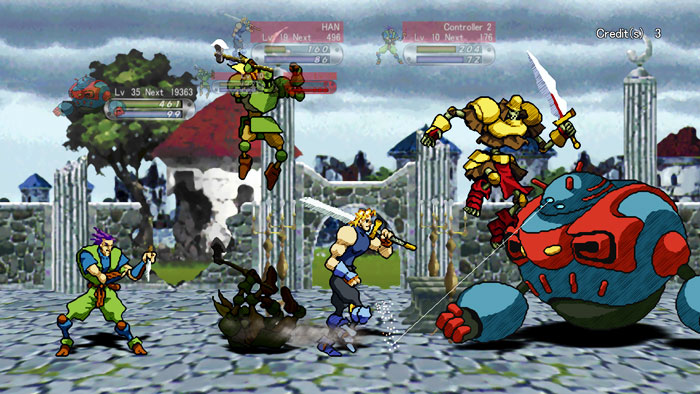 While Sauvanne is convinced the graveyard is safe to hole up in for awhile, but the group is confronted by Rolfia, the head of the Black Order of the baron’s guard.  She calls Sauvanne a traitor and says that she is going to let them play with one of her toys first if they won’t hand over the sword to her.  The toy is a 12 foot tall mechanoid that cannot really be damaged by the characters. The characters fight around a large barrow.

The core thing here is that the mechanoid should only be superficially damaged from the character’s weapons and spells.  First level 13th Age characters can do some amazing shytte, and there are a lot of different classes to deal with (like the chaos mage) but you should be able to make it believable that the mechanoid isn’t really damaged, though they are doing damage to it.   The critical point is when someone tries to use the golden sword on the mechanoid, stuff happens.  As soon as the sword is swung, the barrow nearby bursts open and a warrior in golden armor (very dead looking) appears, and the sword throws it’s current wielder into the nearby grave stones (4 damage) and teleports to his hand. The golden warrior crushes the mechanoid immediately.  The head of the black order and her guards run away in fear as the dead rise from their graves around them (influenced by the presence of the golden warrior, but not controlled or any concern of his).

The characters are then attacked by the golden swordsman, but make sure they aren’t hit–if they tell him to STOP, he stops and they learn they can issue commands to him. Have Sauvanne do this and be attacked if you have a lot of damaged characters after the mechanoid battle. 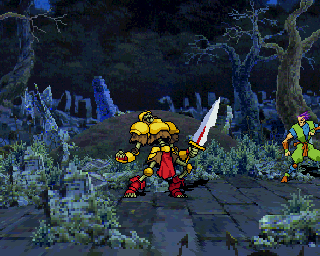 Don’t bother statting the mechanoid except Init +5, Attack +5, Damage 15.  This won’t hit often but when it does– ouch.  It’s a story element (players won’t know this and that’s OK).  It will go for the sword and try to wrestle it away if possible.  If they attack Rolfia, see below.

Sauvanne can say “That sword… This golden warrior must have wielded it long ago. Legend has it that the sword possesses the power to wipe the darkness. I had no idea it would summon the golden warrior. The Baron has been desperately seeking this sword and now I know why they are afraid of it. This warrior has the power to end the Sorcerer Cantacuzene’s reign over the Barony, forever.”

I did not plan to involve all of you… But when the Baron Arceneaux discovered I was going to revolt, I did not think he would use so many troops.
I cannot fight this battle alone. Do not be fooled by Baron Arceneaux or his family. Whoever has the sword will be captured and executed! From now on, all of you will be targets as well. We must leave here immediately!”

The dead start to rise out of their graves within a radius of the Golden Warrior.  Any that get close to him he destroys, but it is a constant threat until the characters leave the graveyard (for the final battle).

Sauvanne suggests they go to a nearby village (Crowyard) as it is friendly to the rebels against the Baron Arceneaux and the Sorcerer.  The characters may want to hide in a nearby woods or go kick some ass at the Baron’s keep.

They can raid the Baron’s keep, or go to a nearby village friendly to rebels against the Barony (the Arceneaux’s), or head to the woods to hide among the rebels there.  Whichever place they decide to go, the fight is the same, though you will need to make up the getting there part on your own and frame the fight.  My players went to the keep and snuck in.  The keep I used had an access tunnel beneath it for supplies and was otherwise unguarded.

Depending on what they do, they are likely attacked, or must fight through, more guards and the Baron’s adviser (Zul) who traps them with magic in an ‘arena’ with a giant summoned troll via three witches in mauve robes.

Zul, when captured, can give information as to where the Baron is or Cantacuzene the Sorcerer…Connective Tissue 3 really depends where the characters have this fight. If they are in the Crowyard village or in the woods, they should go to the keep to finish the job. If they are already at the keep, then the second wave of antagonists should show up after Zul’s ogre and witches are defeated.

This is a fight that has a pre-determined outcome.  The characters will attack either the Baron to get to the sorcerer or find the sorcerer.  They will fight minions and either the Baron, Zul or any of the named characters that survived the first fights.  The setting for this could be anywhere but inside the keep is probably best.

While the characters are fighting, the Sorcerer Cantacuzene shows up and the Golden Warrior gets super pissed off and those two battle, destroying each other, and the sword in the process.  In our session, the final battle was in the keep and it started to collapse–the characters ran away and the whole thing came down on top of the golden warrior and the sorcerer.  After the Sorcerer is destroyed, the other named characters will snap out of it and be sorry for what they’ve done as they were geased by the sorcerer…  FIN!