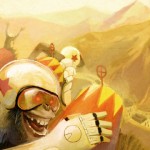 Wisconsin state championship in Shadowfist this coming weekend at Plattcon.  I’m either going to play my Dragon ‘A List’ deck or the Hand/Dragon big Bruiser cycler.  Neither deck has done great at the Gen Con tournaments, but I’ve just missed getting to the final by a few points with both.   I’m thinking of stripping out the legendary Iron Monkey from the aforementioned Big Bruiser cycler as he really is just has a giant target on his chest any time he hits the table and what I’ve found over the years is that he just doesn’t take sites all that often.  I only got one box of Empire of Evil so far but there are some juicy tidbits in there to throw in to each deck– it’s just deciding which NOT to put in that is the challenge.  One thing I love about the Shadowfist tournaments is that they are friendly and fun AND hardcore competitive.  It’s a very tough blend to hit for a game, and a game community as getting walloped is usually never fun in a game–and Shadowfist has a lot of walloping all round.