Night of Blood is a classic WFRP adventure and it’s free on Drivethru RPG. 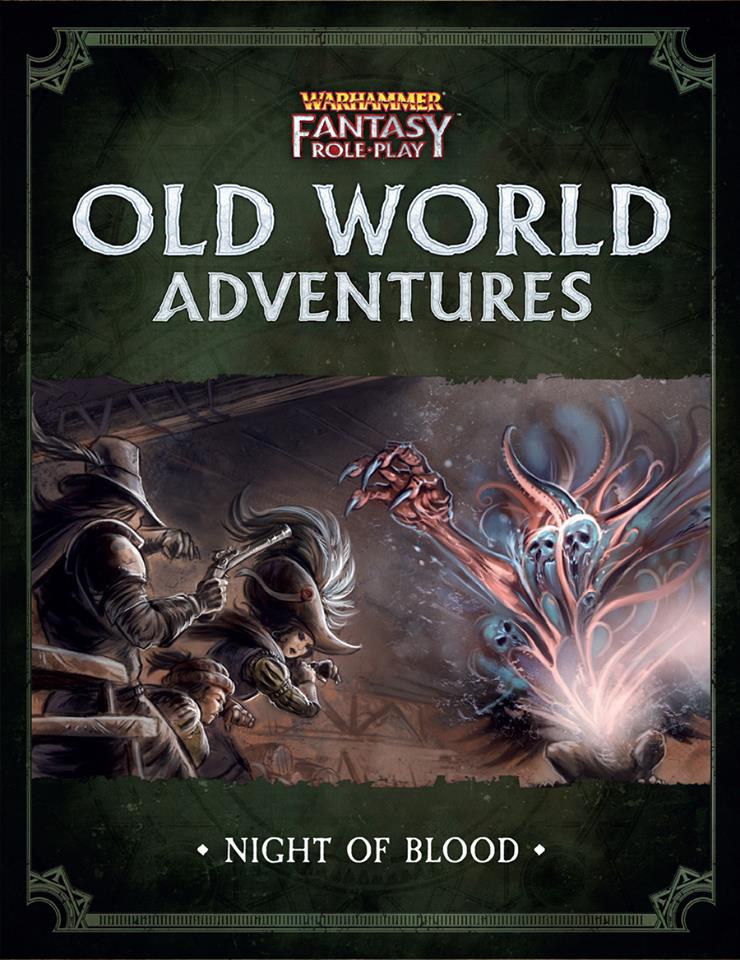 I partially ran this one in college– the players didn’t take the bait due to ‘running away from some baron’s men’ factor and avoided the fun. There are many, many adventures influenced by this one, including 2-3 DCC ones I can think of off the top of my head that are now ALSO classics.

I haven’t picked up WFRP 4 yet, but it’s bound to happen eventually.

I’m keen on the new Warhammer Fantasy Roleplay developed by Cubicle 7, having played 1st extensively and 2nd edition a few sessions.  In my middle years, I see many, many flaws in both 1st and 2nd’s system, but the game had some high quality short adventures and, of course, the Enemy Within Campaign which I never got to run players through because they— became like chaos itself, spiked off into random directions mostly due to crimes, and I had to start giving them chaos attributes until we quit playing halfway through college.  Others had similar experiences.  It could be that the nihilism inherent in the late 80’s that seeped entire into the Warhammer world view made players inherently nihilistic as well, or maybe Slaanesh is just that attractive…

That brings me to 3rd edition WFRP and… my worry that any of the things in 3rd edition make it into 4th.  3rd was the prototype for the much refined Star Wars RPG from Fantasy Flight, yet it was a total mess and completely unmanageable at the table.  I played it once as a player and was astounded at the number of chits and cards and stuff, as well as how long it took to finish a small combat with beastmen.  In Mythras or D&D the fight would have taken 30 minutes of combat time, where 3rd WFRP took well over an hour.  Yet, 3rd edition had quite a few excellent adventures (Witches Song and the new Enemy Within for starters).

Here is a published list of features so far:

The d100 system used will be broadly familiar, but a new implementation designed to offer three ways of resolving actions:
1 – a decision based on the characters’ abilities

Influence from 3rd aside, what I worry most about here is that WFRP 4e will be a ‘story game,’ leaning far towards something like FATE than anything my players and myself would ever want, but let’s see how this shakes out.   There is always the option of running WFRP with Mythras, which can’t be beat system wise. 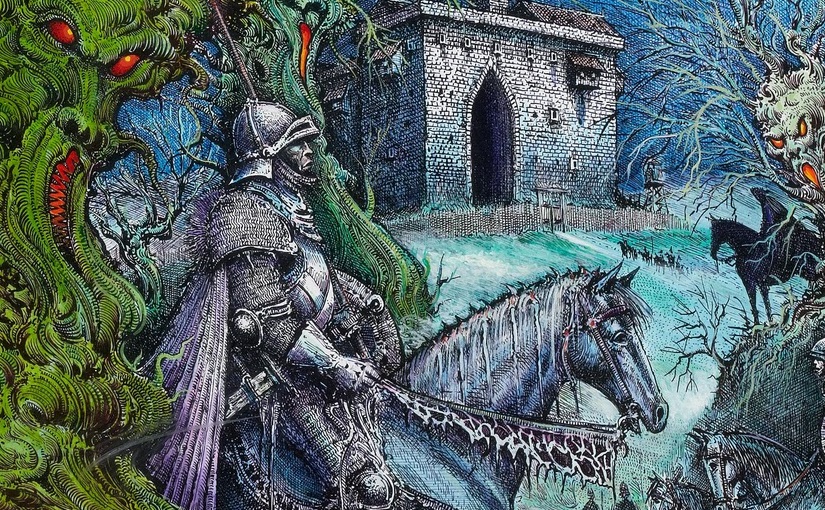 Warhammer Fantasy Roleplay is a great game with some pretty glaring burrs on the system in actual play (yep, in all three editions).  For First and Second edition, the combat system is very whiffy, far too whiffy for low fantasy in my opinion and despite the funny critical hit tables in first edition (the 2nd edition ones were not as fun), pretty damn boring.

However, I have a soft spot for it and it’s milieu, despite what it’s become since with GW and Fantasy Flight’s strange 3rd Edition.  Third is… very odd and to me unplayable with my group, impossible to play online as well.  It’s great it has died and hopefully Cubicle 7 will do something great with the license (there are some EXCELLENT adventures written for third edition though that beg conversion to a better system).  With the Humble Bundle giving access to all the 2nd edition material recently, I wanted to post this thing I worked on for a bit about a year ago: creating characters in Mythras using a WFRP style career system.  This assumes that you know a bit about WFRP (or just got the books) and you know Mythras or Runequest 6.

Mythras core is all system and can work for all sorts of genres, especially low fantasy. It’s got an explicit Sword and Sandal feel to the main book but it’s not really pushing any type of world on the players. It’s a massive toolkit game with an amazing combat system, and easy levelling /XP system and while difficult to grok in some cases (Animism), a very rich magic system.

What it doesn’t have is easy character creation. It takes a bit of time to build characters, and I’ve built about 10-15 of them so far myself and for my players and con games. Players have a lot of choices in skills and the points buy system gets a bit tedious when you spend a set of 100 points 3 times during character creation to build up your skills, and man that is tiresome when you want to grease up and get playing! I first got this idea while running Thulian Echoes (from Lamentations of the Flame Princess) with Mythras.  I had to make pre-gens for the … diary characters in Thulian Echoes, and while that was OK for me in prep, actual Character generation took a bit of time and my players are impatient, especially when they know most (non 13th Age) adventures I run have a 20-90% death toll (per session). They didn’t know for the first 2 sessions, Thulian has no possible death toll to the original characters…

What I wanted to build on top of Mythras is a career system like Warhammer Fantasy Roleplay for starting characters only. The XP system in Mythras is perfect so once the initial career is set, the rest of the WFRP career stuff is not useful, however quaint, and you don’t have to look back or be bound by your career (which you don’t do anyway since you are a murderhobo now).

The reason to run WFRP with Mythras is obvious: it’s a better system, but why do this to Mythras? It will be easier to make characters. It will be faster. It will still define the character (more in some ways) than the base careers/culture in Mythras without having to roll on all the family and background charts.

What you lose: the age of the character won’t give bonus points like in normal Mythras, you just roll your career and all selection is taken care of except for a couple skills. You also lose the WFRP signature ‘skills’ in the game, like Strike Mighty blow, Dodge, Flee!, etc.  If you play Mythras you will realize that these are no big loss at all since they are handled by the skill and combat systems more elegantly than WFRP 1,2 or 3.  Also lost are the advanced careers. If you use the Mythras XP and guild system, this won’t be missed.  Yes, I know some people loved jumping around from Pirate to Pirate Captain, from Rat Catcher to Bodyguard to Student (?!), trying to become a wizard after hundreds and hundreds of spent XP, but that all can be handled via the normal Mythras XP system and Guilds/Affiliations.

Here is how it works:

1) Create a character up to the step where you start picking skills (roll or points buy as normal), you will need to pick a RACE at this point (dwarf, wood elf, human, halfling) and create that according to the rules in Mythras
2) Pick a Class – warrior, rogue, academic, ranger which defines the set of careers you were BEFORE starting on the murderhobo career of an adventurer
3) Roll on that Classes Starting Career table see below for the list (or pick if you must, you wuss)
4) Add the bonuses listed in the Career description for all skills listed to your base skill.
5) Add the bonus and any listed professional skills
6) Add the bonus points listed to the combat skill (or skills)
7) Take the spells listed for that career if applicable
8) Take the trappings for that career listed
9) Name the character
10) Passions (if you use them) -work these with your GM.
11) Go play!

Add an additional professional skill from the following:

Bonus:
Add 15 points to the skill selected above.

So the next steps would be to do this for all the Careers that you would want.  Here is the first edition list.

I also have the excellent WFRP 2nd edition career compendium from Fantasy Flight with hordes of careers that are crying out for some sort of use, that would be a LOT of work to convert all those careers.

There’s the base system for character creation, now someone has to bust out the remaining 62 career templates in their spare time.  I’ll throw up a magic user type next week as an example with some ways I was thinking of doing battle magic spells. Really it’s just the same as creating a ‘cult’ in Mythras that gives magical knowledge/power to it’s members. Some of the WFRP hedge and battle magic spells are iconic however.

I’m not going to be backing as many kickstarters going forward, but this is one I had to go for.

Dungeon Degenerates.  I’m not too sure about the actual game play, but I couldn’t say no to that art.  Very Ally Morrison-esque from the golden days of Games Workshop.

Still 12 days to go on this one!  Note the SLAYER references… 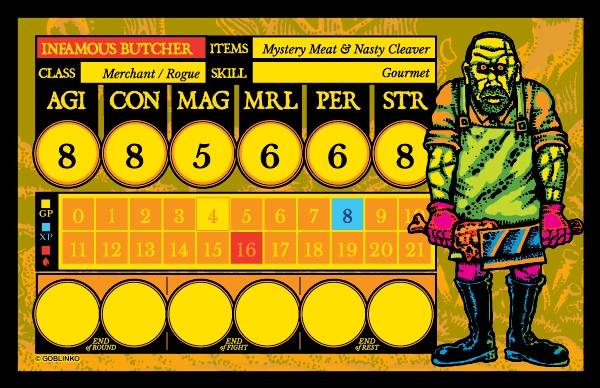 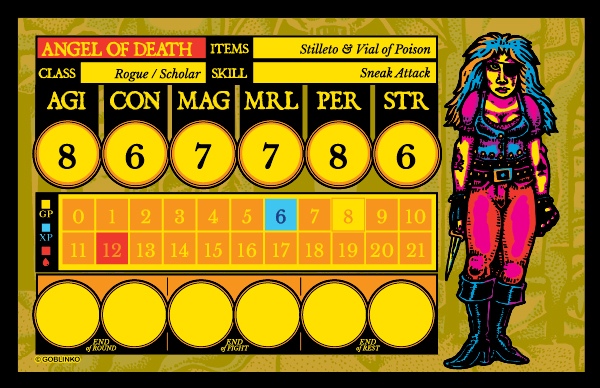