Here are some shots from our day of Frostgrave this weekend. Fun stuff! A great, very cheap to get into game of wizard warfare in the frozen city. This was only my second (and third) time playing, so I can’t make a ton of comments having only 8-10 hours of play in, but there are some things I really dig about it. It’s easy to build a warband, the most difficult thing being selecting spells/school of wizardry. The rules, while a bit sloppy on the edges, are very clear with the entire game being run off of two D20’s per player (of different colors). The dice in the game matter, especially since it’s a D20 rather than a smaller die size. If your dice are hot, you are going to do really well, if they are in the shits, you are going to be eating snow and frozen mud. While some players have found this abhorrent, I believe this is a feature of Frostgrave.

Stuff I don’t like all that much is archery being very powerful. I can’t attest to this over many games played, but you can do a ton of damage to a warband via archery. This was a common problem in the early days of Mordheim as well though…. make sure your tables are chock full of cover (it is a ruined city after all).

You need to remember as a player that your non-wizard/apprentice figures are FODDER. They don’t level up and they can be replaced pretty easily. My initial warband was a couple of dogs, two templars, a thief, an archer and (usually) a summoned bear. Templars are slow but horrifying to face in combat. Like two handed guys in Lord of the Rings SBG, you pair them with a normal dude and have the two-hander attack for a +6 fight score with +2 to the damage– which is enough to break armor with a roll of 6 on a D20 for most troops. I may have gone with a barbarian but I couldn’t find any painted miniatures.

One of my games took FOREVER on account of the fact that there isn’t a ‘bottle out’ rule like in Necromunda/Mordhiem and the fact that there was fog and mud EVERYWHERE. You can get your little maings to fight to the death no matter how outnumbered or outclassed. Matt complained about his luck, but the fact is, that shit happens when you play with unpainted miniatures. He should know this by now.

Otherwise, I’m going to let the pictures speak for themselves.

I got to play a 3-player Frostgrave game over the holiday and it was pretty good.  It’s a game ALL about your wizard and needs very few dice types (mostly a D20 is all you need).   Each player makes a warband that consists of a wizard, wizard apprentice and ‘soldiers’ which could be anything really.

Wizards have a spell school that is their primary school, and a secondary and teriary that they can draw spells from.  Each spell has a casting value (like WFB or Mordheim) and wizards have to hit that on a D20+level to case the spells.  If you ever play, remember this part and that you are LOW LEVEL wizard.  Take spell you can cast often, and don’t pick ones that have high casting numbers!

The play unfolds in initiative order but with phases for each type of character.  Wizards go first (all player’s wizards), then apprentices, then soldiers and finally monsters.  Once all four groups have gone, the turn is over.

Combat is simple and while similar to the Lord of the Rings Strategy Battle game which is a D6 roll off between fighters, with ties going to the higher fight value, Frostgrave uses a D20!  What’s more the fight bonus differences between different fighters is not very high.  Even in a fight where someone has a +2 over another fighter really is not too good– it’s essentially just a roll off between the fighters. 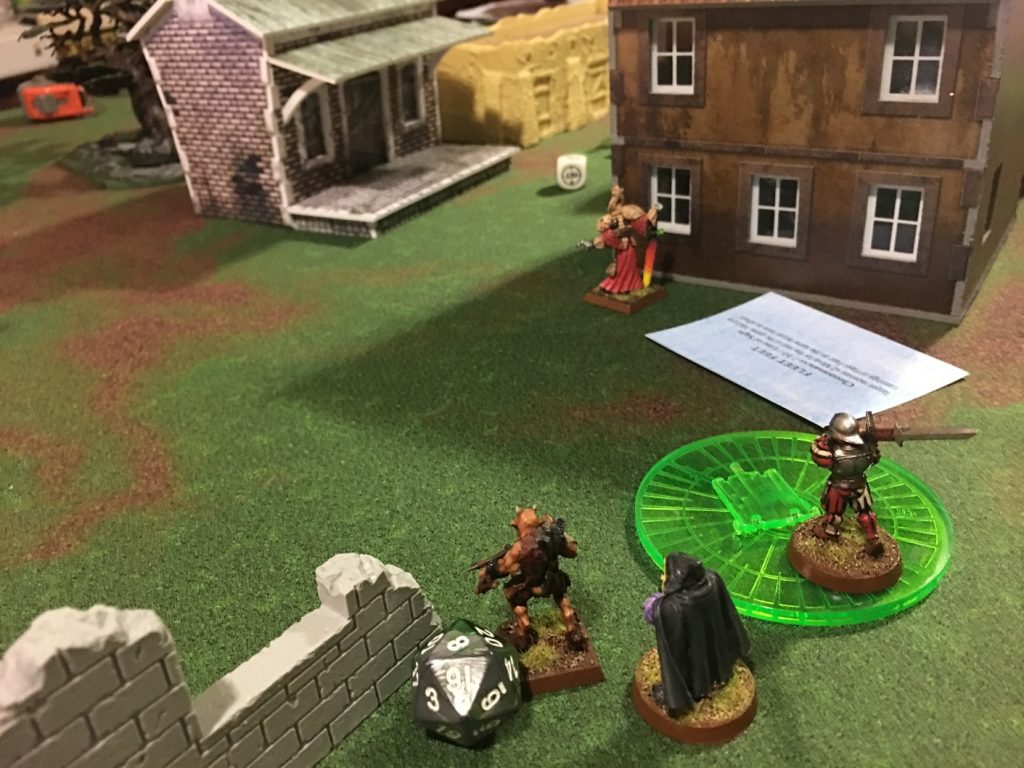 Once a hit is scored, if the original die roll is over the character’s armor value they take some damage in hit points, like D&D.   It’s a very swingy system and you can lose by lots even if you have superior fighters, which can be frustrating for some.

Overall the game is all about the spells and the magic.  Since it was our first play, we chose spells that were far too high level for our wizards, and suffered for it with not  a ton of spells hitting the table.

So after one play, I would put Frostgrave as better than Mordheim due to Mordheim’s bollocks combat system but it’s not as good as Necromunda.  It’s a tough call with Lord of the Rings but I think Frostgrave wins out because it has the campaign setting. 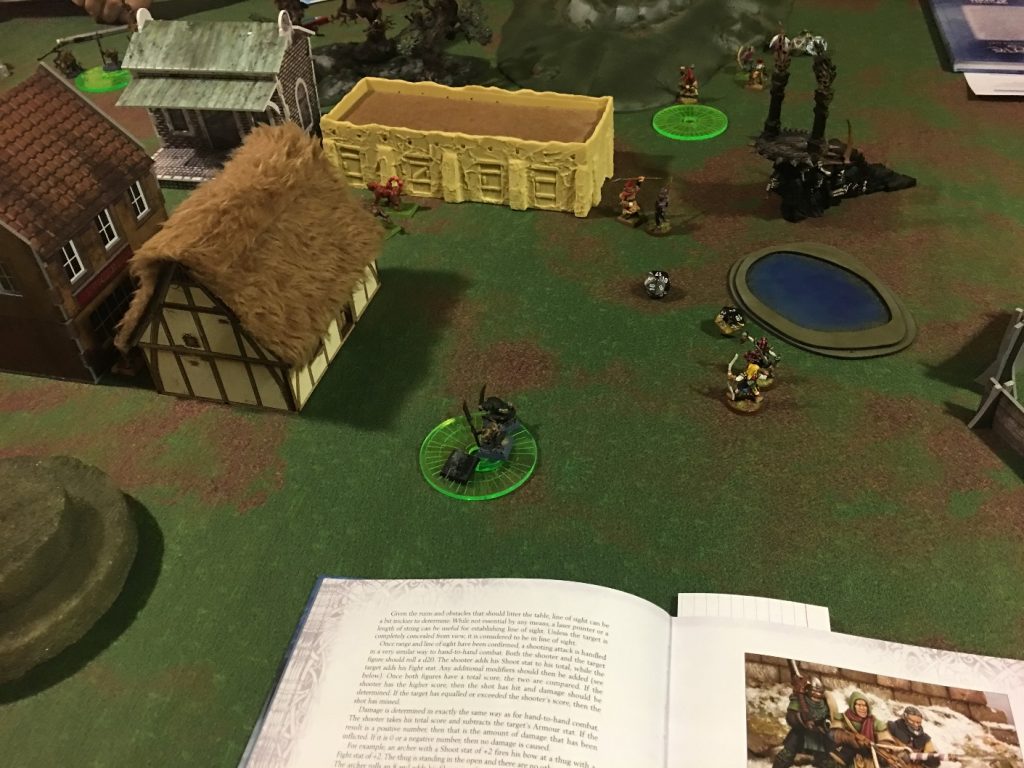 Overall the book is cheap and you can use whatever mini’s you have lying around.  The system is simple enough where you won’t have to totally start from scratch with the rules if there is a long time between plays.  Likely worth buying.