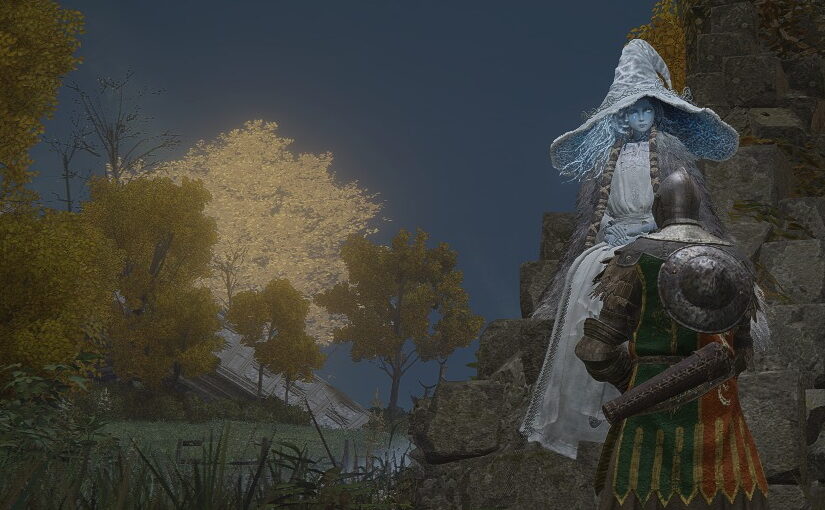 I’m 17+ hours in and I’ve seen a few things and suffered some bad beatings, had my first character’s save file corrupted and had to start over from scratch. I’m going to comment on a couple reasons why people may not like this game even though reviewers have given it 10/10 almost across the board. Do you like Dark Souls? This is absolutely a 10/10. Fan of Breath of the Wild or Monster Hunter? This is probably 7/10 for you. Lukewarm or couldn’t get through Dark Souls? This may not be your thing, and that’s OK!

First off, this is fundamentally a FROM game, but open world. It takes a lot of things from previous FROM games, mixes them up, improves them and throws you into this gigantic area to try to deal with all of it at once. There are wandering giants, mud men that rip their chests open and shoot their insides out, gigantic fighting trees, parades of low-lifes, mount and blade style mounted warriors, harpies, sirens, and just so much more. The game feels like a best-hit collection from the previous games, yet due to the new context, without being repetitive or redundant.

Mechanically, the game is closest to Dark Souls compared to Bloodborne or Sekiro. I think there is a ton to learn and the nature of the game forces you to deal with aspects of the mechanics that you may not have bothered with in the previous Souls games, such as the magic system, summons, mass healing, AOE attacks, and so on. At the root of this is the incredibly varied nature of the enemies you will face. The Tank and Spank style that I went with in the original Dark Souls works, but there are mobs and bosses that will really cause problems for this style and will force players to add other aspects (like summons) to their repertoire. I went through the entirety of Bloodborne using the Kirkhammer to smash things with no thought to any other mechanics, but there’s no way I will make it through Elden Ring with such basic tactics that I can see. Add to this that many battles will be fought on horse-back and you have a totally new dimension to the game. And speaking of horse stuff….

The Mount and Blade Parts

Mount and Blade is an awesome series with excellent mass combat mechanics and really groundbreaking horseback combat. Elden Ring borrows from this extensively and creates many of the same type of feels with it’s horse-based combat. I am addicted to running around and challenging other dudes on horses to fight. The best part is dragging your weapon along the ground and just mowing through dismounted enemies. This is very similar to the feeling of smashing into a formation of foot soldiers in Mount and Blade and hacking them down with a giant sword or scythe. If you dig Mount and Blade, you will feel instantly comfortable with the horse-based combat of Elden Ring.

There are a lot of classes in the game and they all give you a basis for a playstyle that you may or may not follow through the game. It’s fundamentally if you want to go Strength, Dexterity or some sort of magic. Class doesn’t matter that much and if you are stressed about it, just take the wretch and let what you find in the game define what you become– it almost always works out that way anyway.

That said, I really like the prisoner for the silly helmet and the Samurai who starts with a longbow and katana (this would be a dexterity build). I started with the bandit for a dex/arcane build, but my second character was, of course, a wretch. While lots of builds are effective, not all of them are easy and you could be setting yourself up for HARD MODE if you go down the magic path (at least at first) without ever playing the game. Basically there are a lot of foundations to choose from, but they don’t matter all that much and even out as you gain even 10-15 levels.

Weapons will feel very familiar to Souls players, in fact, many are nearly the same but with one critical exception: weapons have special abilities called Ashes of War that allow one of the heavy attack buttons to invoke a special move– some of which are pretty mundane (like Determination that gives you extra damage) and others that are spectacular like Glintsword Arch which turns your weapon into a massive one for a single strike, or super useful such as a special dodge. What’s more, you can change these special powers out, which also can change your ability affinities with each weapon (for example, some Ashes will change a STR affinity from D to B, etc.). These use you characters spell points (FP) to use, so most of them you can’t use all day. Great addition to the game so far that you may miss early in your play.

I have never run a balls out magic user, just added a bit of Faith to my STR builds to heal on the fly. I’ve seen some magic during multiplayer and it is NUTS in this game. This is an area of Elden Ring I can’t wait to explore more, as soon as I get more confidence that I can survive!

In addition to the normal spell builds available (pyro, sorcery, faith), all players can use SUMMONS. These are NPC’s that join you in a fight /period of time and range from sorcerers to wolves, undead and many other things I haven’t seen before. This helps a ton with bosses and you can tell that they made bosses more difficult assuming that all players would use summons.

I ran all of Dark Souls 1 and 2 without using multiplayer the first time, and boy I missed out. Multiplayer is one of the best parts of the game despite the fact that it is obtuse to try to get going at first, and currently prone to drops on the PC fairly frequently.

The beauty of multiplayer is the fact that it can ease up the difficulty vs mobs and bosses and allow non-standard and sub-optimal builds as well as allowing more experienced players to carry newer folks through some of the really rough spots so they can progress.

Invasions are a bit odd in Elden Ring– you can only invade players that are already using summons of other players, so you are walking into a 1v 2 situation at least every time as an invader. If your goal is to hunt and kill people, that’s great, but if you want to duel, this is very different from Bloodborne /Dark Souls.

There are invasion arena areas where you can get duels in designated areas, but it’s definitely not the same as the old games– seems like it’s a bit friendlier for new players who don’t have to worry about getting invaded while alone.

Elden Ring is awesome and absolutely deserves the hype it got before release and is getting post release, confusing (by design) and very difficult to try to solo. I have a long, long way to go in the game and will probably do a real review in about a year– likely when Elden Ring wins GOTY for 2022.