I like Blood Rage– a lot.  Sometimes I wish it was chits and small wood pieces though because for a time, I was carrying the fucker around in a PELICAN case with all the miniatures having to be removed from their original boxes every time we played.  This meant that set up and especially take down time was prohibitive for most gaming nights.  Since the game needs to be played more often that was no good– just really damn unacceptable don’t you think?

Matt got me the laser cut box insert for Blood Rage (the go7gaming one) for my birthday last month and I slapped it together in an hour or so last week.  The only thing weird I did was get some different while glue per the recommendation in the instructions, rather than just using elmers.  I used a damp paper towel to clean off the excess glue.  While the construction was tricky in some places, the instructions were easy to follow all the way through, with just a couple DUHHHH’s along the way.

Here are some pics of the work in progress and final. 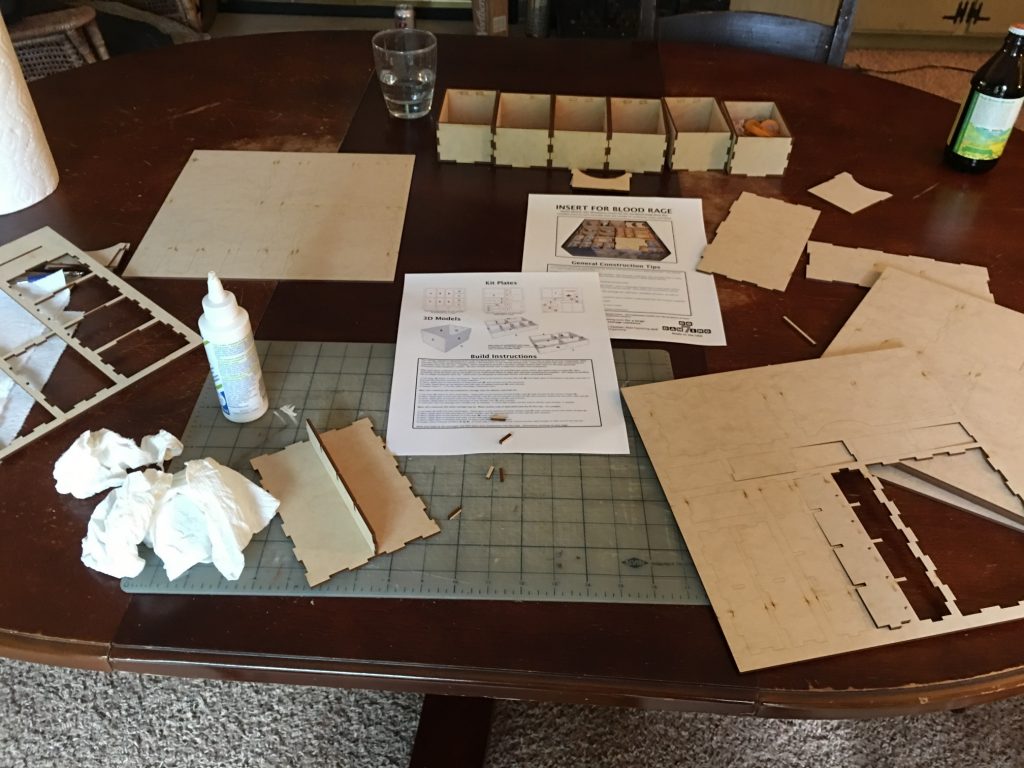 Here we have the start of the process with the Clan boxes complete at the top of the picture.  Each clan has a box and it’s LABELLED (see below) for ease of putting away.  The clan boxes go on the bottom of the BR box. 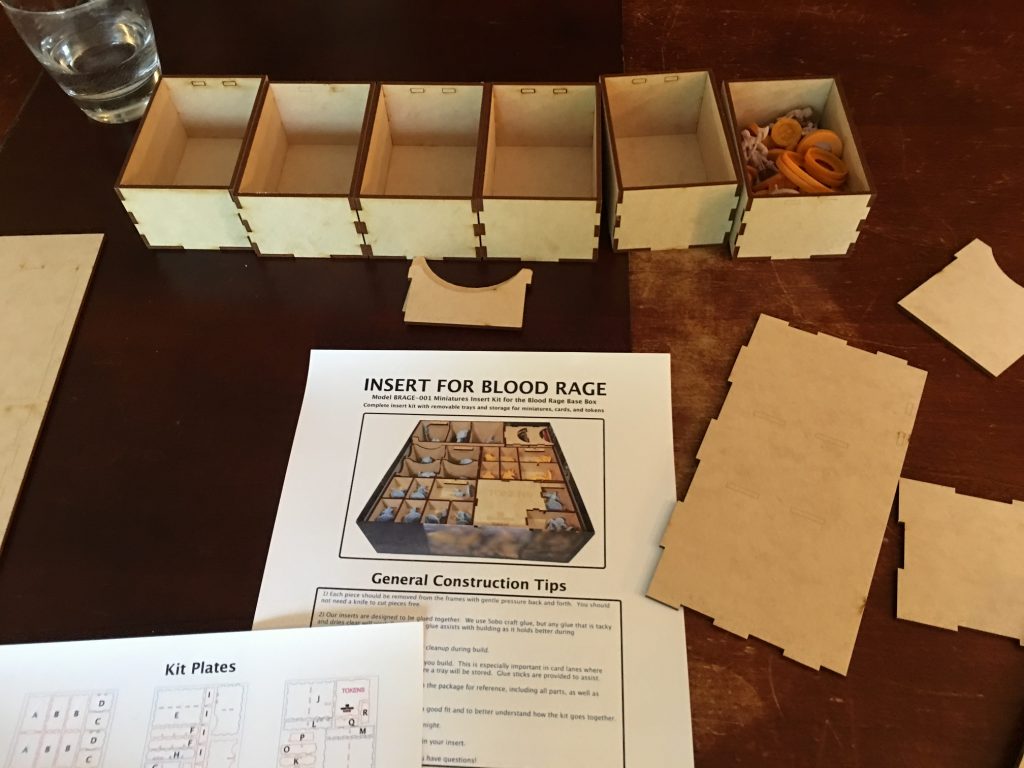 Close up of the clan boxes with the Snake clan up inside already. 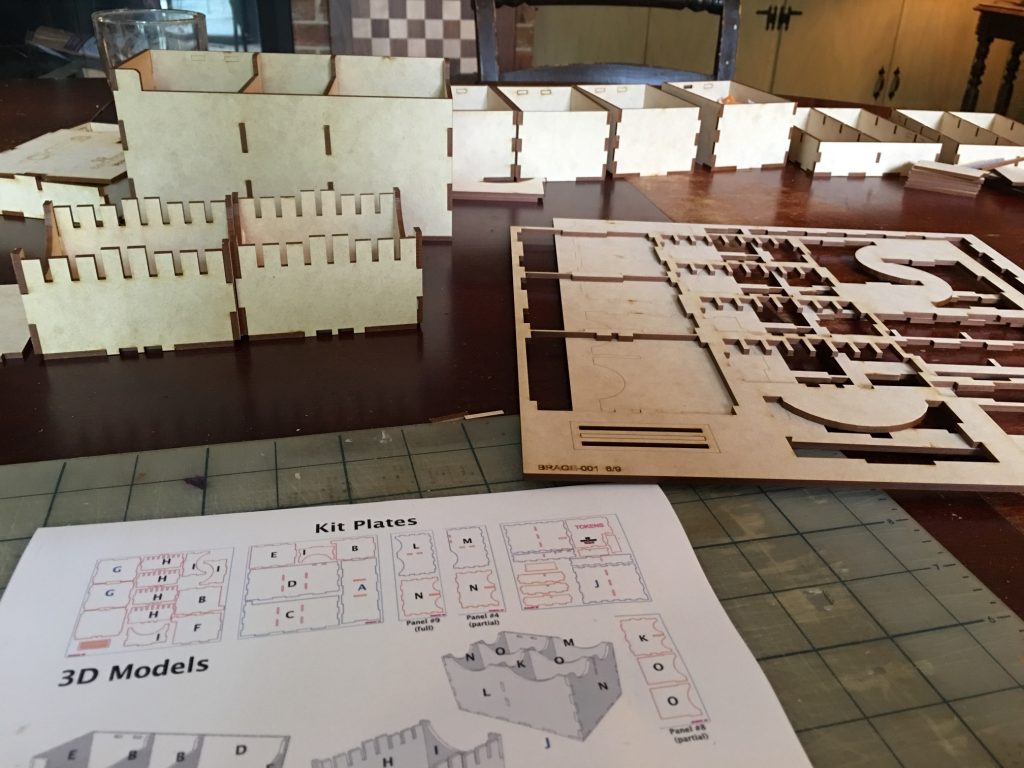 In the back is the big monster box that will also support the board.  In the foreground is the excellent card holder that stacks and then is placed sidways in the box.  It holds sleeved cards no problem (you did sleeve your cards right?)

On the upper right are the smaller monster boxes before I placed the dividers in. 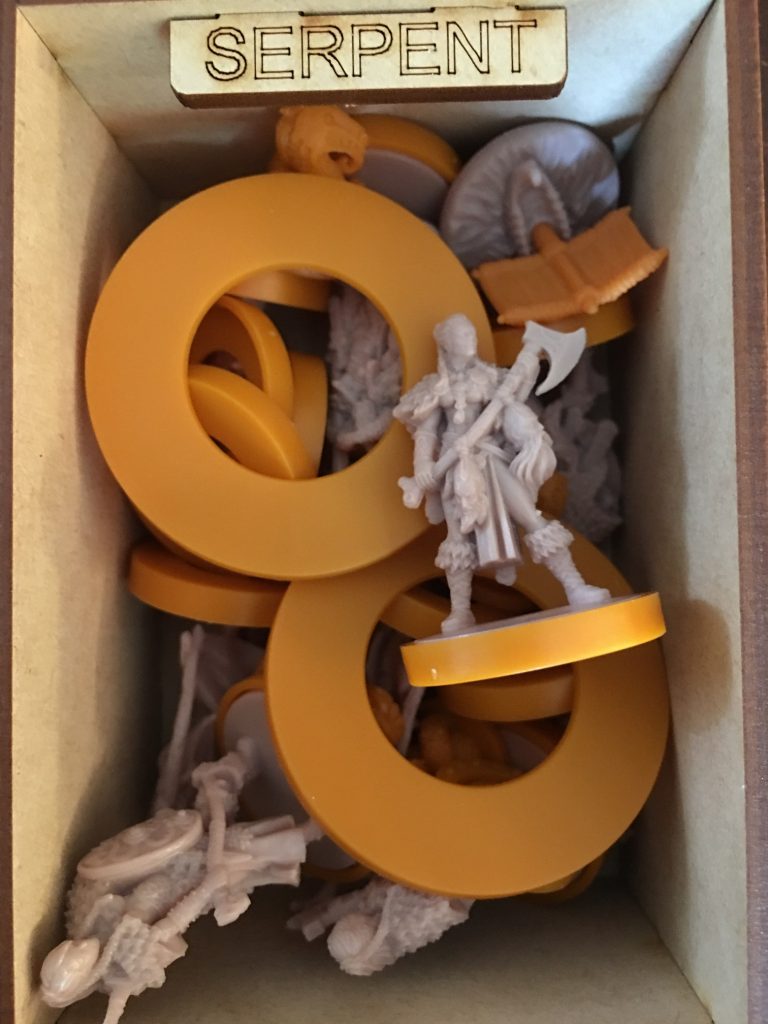 Close up of the serpent clan box.  This fits everything related to each clan from all expansions. 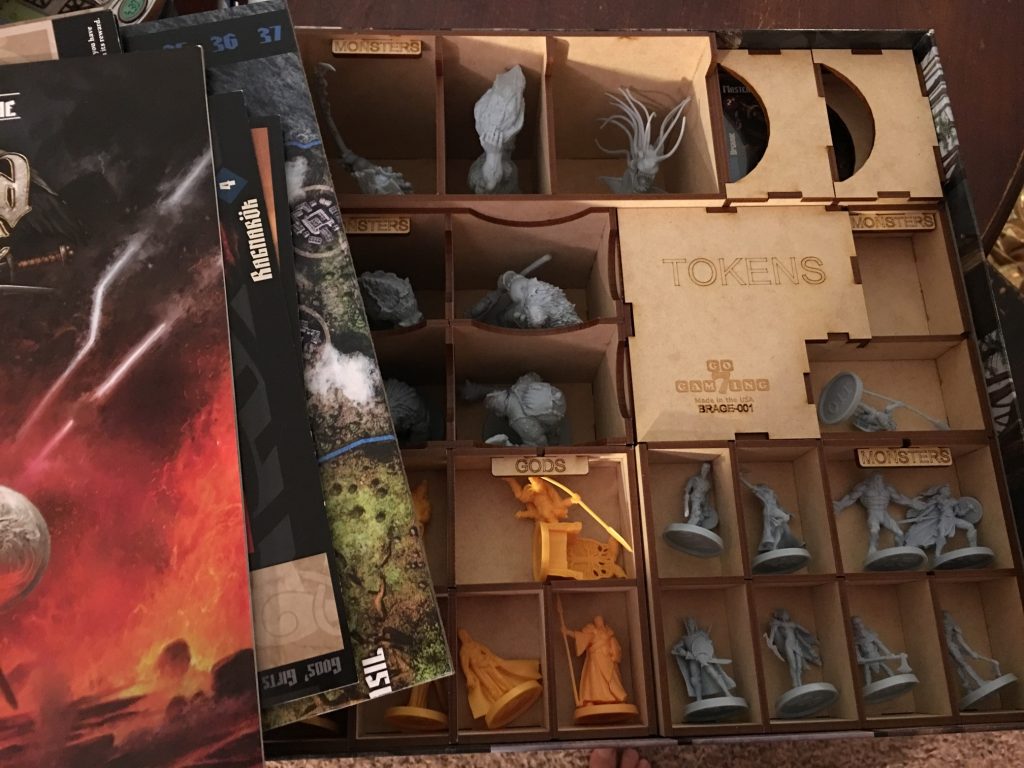 This is the final result. Cards are in the upper right, a token box with a lid in the middle and you can see that this layer of the box is dominated by the monsters and gods.  The clan boxes are below and support the level you see.

Overall, I am quite pleased with this insert.  My BR box has taken a beating so far, but seems to be holding together for now.  Best thing is that the pelican case has gone back to the basement! 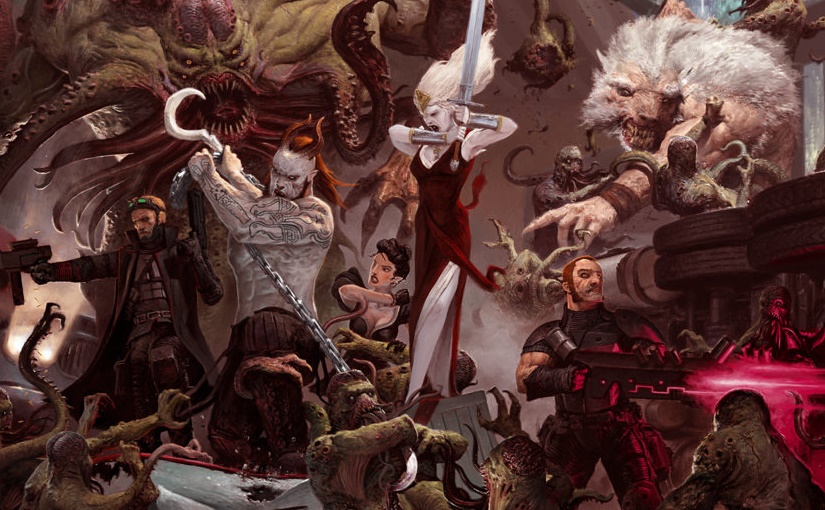 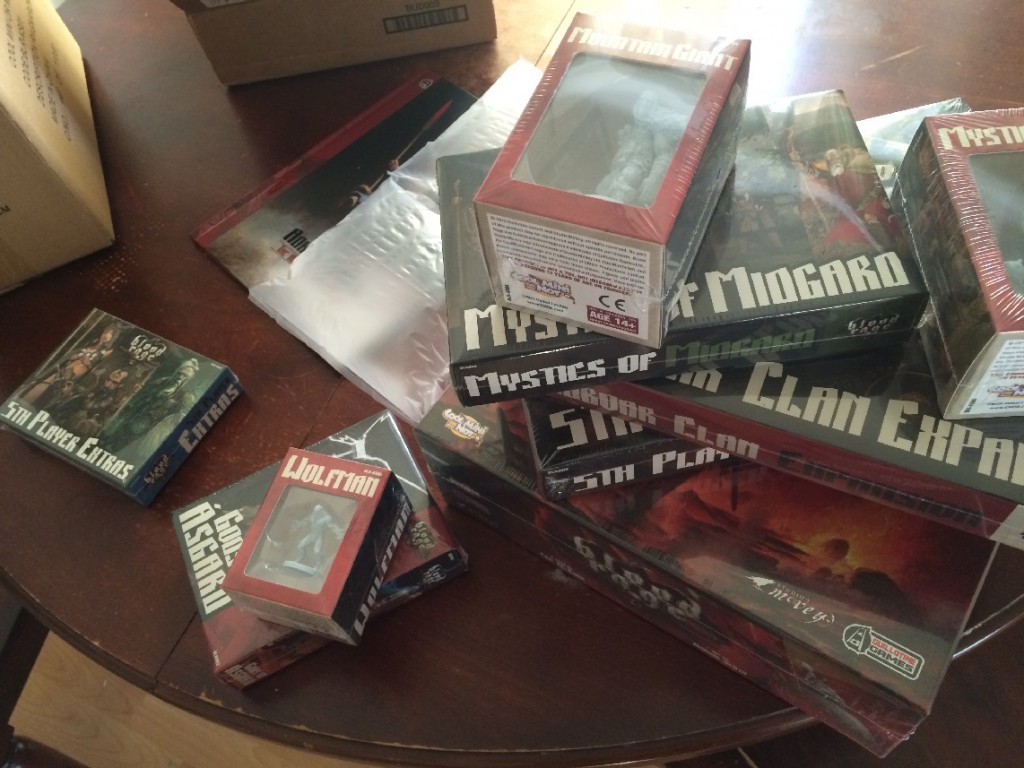 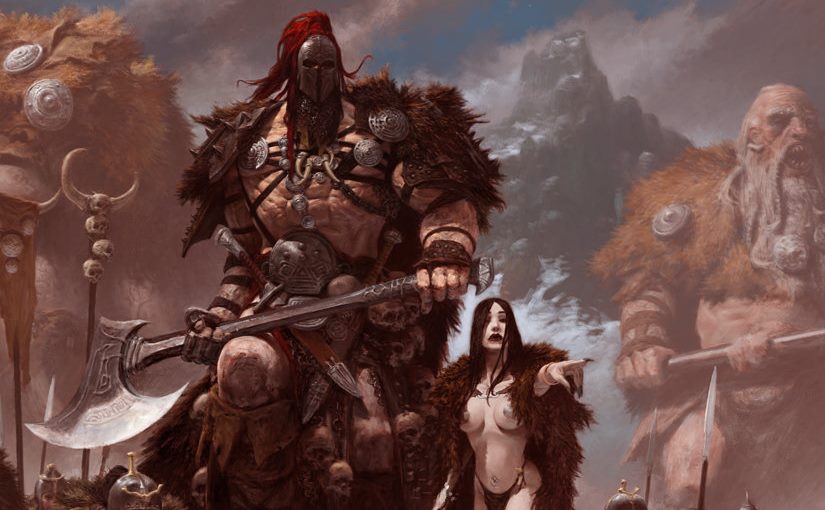 The esoteric order of gamers /Universal Head put out a one-sheet of rules for Blood Rage.

They have LOTS of rule summaries for some very well loved and obscure games as well.

Worth checking out here.

Matt and I made the trek to Gamehole Con yesterday in Madison, WI and it was a fine time.  Due to no planning on my part, we didn’t get into any scheduled games, like the bolt action tournament or any of the 5E or other OSR RPG games. However, for me this was just a ‘check out’ year to see what it was all about, so walked around and painted stuff and I busted out BLOOD RAGE and got a few games of that in. 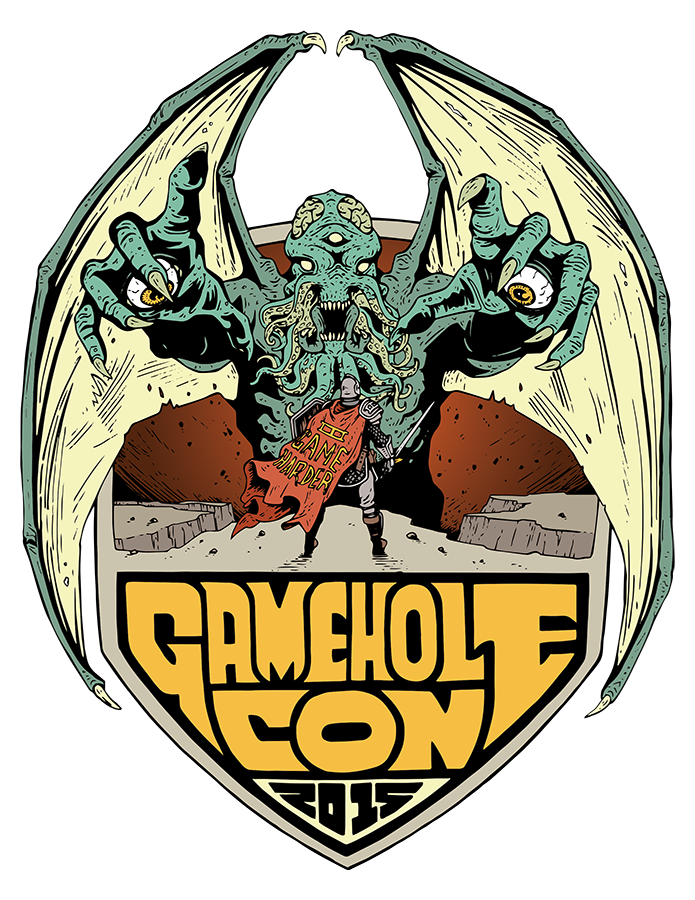 It is not a huge con, maybe twice the size of say Plattcon or Hooplacon.  Yet it is a huge OSR con–there were tons of Dungeon Crawl Classics, Swords and Wizardry and other OSR stuff going on.  If you count 5E as in the OSR style, the entire con was mostly OSR RPG’s.  Absolutely there were Pathfinder games there, but they were in the minority.

We spent about 3 hours at the free painting table where I found an old Talisman Rogue and just had to paint the fucker.  They had BOTH of the Kevin Dallimore painting books there was well, so I was able to pour over those.  Matt got stuck on painting some sort of samurai and though he spent awhile on it, it was still not finished.  The lady that runs it had a ton of great tips so highly recommended.

Otherwise it was extremely well run and organized. They really have their shit together and I will be definitely attending again.  Likely I will run something next year as well.