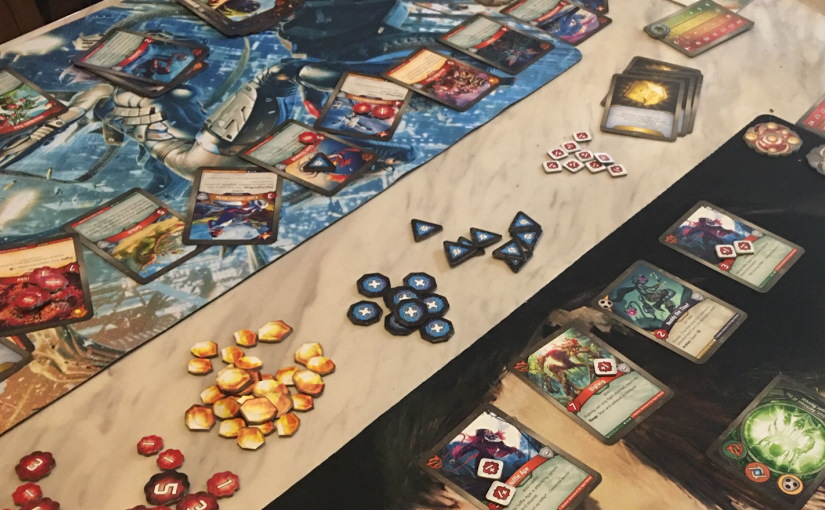 Ah, the smell of Keyforge in the morning!

I pulled out a win in the finals of our 8 deck tournament in a very tight game vs my kid, age 9, after a brutal game vs his sister in the round before. While he was not happy, he steamrolled into the finals with his deck and nearly won anyway.

The deck I won with I’ve always felt was a bit shite, but it was able to pull through in two tight games. First, it has SHADOW with the ever dangerous theft of ember and equalizing card in a pinch. Most of the rest of the Shadow stuff in the deck is useless crap though. Logos is the other faction that has some great cards, but while I was able to forge a key off my Logos artifact combo (the guys that give you ember for using artifacts and a bunch of artifacts on the table of the same faction) that only happened once as my opponent destroyed all my Logos creatures the turn after they hit the table.

What pulled it off for me was a huge Untamed turn where I was able to take out his creatures that increased my key cost and gain a mess of ember for the win. During his last turn, he could increase my key cost by one, but it wasn’t enough because I had seven. Great game.

So we will probably play casual for a week or so here and then have another tournament with some of the unplayed or crappier decks. I must say the NAME of the deck may be the most important initial thing.

I think I like Logos the best, maybe because my initial decks did not have them so I had to go farm for a couple that did, but also they just have some crazy cards. Dis is also awesome. Shadows are the guys everyone hates but wishes they had in their decks!

If you are looking to get into Keyforge, the new expansion is out this summer. I figure you need about 3 decks for each player overall– just so you don’t get into a rut going one deck vs one other due to the possibility of power disparity.