I tried to spend as little as possible, knowing that I have so very little time to play games that many games I get can never be played.  There were some that I bit on and need to give the college try.  I probably should have picked up Far Cry 4 in retrospect, but that can wait a bit.  This is what I picked up. 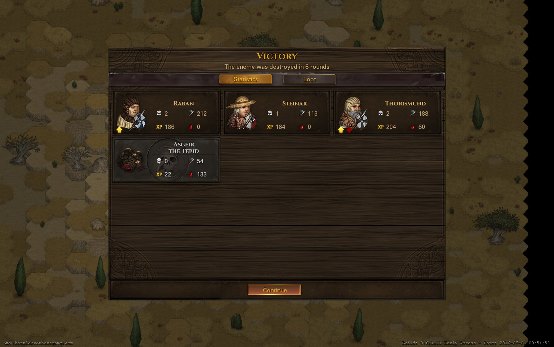 This is like a turn based Mount and Blade where you go from city to city getting quests and fighting in order to build up a group of mercenaries.  It does not have the visceral excitement of mount and blade where slaughtering enemies from horseback is one of the greatest things ever programmed.  However, for those mouse and keyboard challenged, Battle Brothers is an interesting take on it.  Jury is still  out as I’ve played so far only 3 hours.

This was an impulse buy.  Looks a bit like LOADED (from PS1) but with some RPG/ Tower Defense elements.  I haven’t installed this one yet.  Looks neat, could suck.

Was cheap, will play this eventually.  Looks real silly.

I’ve been looking a this for months now but it was never low enough in cost to get.  This is an RPG deckbuilder along the lines of DreamQuest for the iOS.  Haven’t played it yet, but going to get in on this action.

Graham gifted me this and I need to install it. It’s a SHARKS vs Divers multiplayer game.  Looks fantastic!

I’ve been suffering helping my childes play Terraria and while I recognize it as a good game, I fucking hate it.   Salt and Sanctuary will burn away all those shitty Terraria memories as the essential 2D dark souls clone.  Installed and ready to go, but have to finish dark souls 2 first.  Fuck…

I just need to play this and it was finally cheap enough to pick up.

2 thoughts on “Surviving the steam sale”