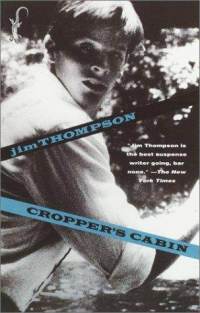 Yes, I know summer is over, but I finished this bad boy just after the solstice so it counts dammit!  Jim Thompson– crime writer, very under-read, if not underrated.  I find while reading his stuff that I have many V-8 head slapping moments of “oh THAT’S where they got that from!”   El Rey from The Getaway is referenced in From Dusk Til Dawn, and the whole “son is the father of the man” thing in Blood Meridian is straight out of The Killer Inside Me (not that Thompson made that up himself).  I’d say No Country for Old Men is almost a homage piece to Thompson’s style.  Though there is no doubt in my mind that McCarthy is the better writer overall, a virtuoso with diverse novels like Suttree and All the Pretty Horses, but for crime novels, Thompson is the best I’ve read, blowing away even Hammett in terms of construction and language.  That said, Cropper’s Cabin is not Thompson’s best, but it is a great fast read delving into the psychology of a kid that is pushed to the absolute brink by those around him, and like a powder keg, the reader is just waiting and waiting for him to implode or explode.  I won’t spoil it, as it has a few twists and turns to get to the inevitable conclusion, but suffice to say it has a pace change in the middle and some horrific revelations.  What I dug most about it was the window into the cropper’s (and their Indian landowner’s) world and lifestyle as a backdrop for the events.  In some of the other crime novels by Thompson, the place and situation don’t matter all that much, but in Cropper’s Cabin, the cultural context is crucial to the story.  I’d put the book slightly above The Getaway due to that book’s almost tacked-on ending (the El Rey bits), but not quite as good as After Dark, My Sweet.  If you’re looking for an intro into Thompson’s work to see if you’ll dig his stuff, Cropper’s Cabin is a good one.  Unfortunately this was last published in ’92 as part of the Black Lizard line of crime stuff so might be tough to find– but with electronic books (bleh!) it’s instantly available.