I am in a Strahd game with Matt and others and we made characters from scratch and dared each other to roll (which happened) rather than points buy. Since it’s 4d6 out of order and pick the best, you are going to get some good rolls, and fuck yeah I did.

I think this is by design.  My limited exposure to 4E, 3rd edition and Pathfinder lead me to believe no one ever chose humans because those games are games solely of ‘testing your stats’ optimization, and the other fantasy races did this better.  Optimization matters quite a bit less in 5E because it’s not trying to be the beardy twink game that 3E is.  What’s attractive about the variant humans in 5E is specialization.  You could (should?) play a game only with human PC’s and you could have a ton of very different characters, even at first level and it would be great.  By design? Remember, as a human, you are unique, just like everyone else.

Secondly, while 5E isn’t explicitly a miniatures game, they will get busted out from time to time.  I ain’t playing with these shit assed Pathfinder/D&D pre-paints. They are terrible. Reaper bones are a slight level up, but still not great.  Given that, and the fact that my brother will do the same thing, I’ve upped the aesthetic a bit and built a couple guys tonight for this weekend’s game from a company that actually knows how to make miniatures.

Yes, they are not painted yet, yes they are still drying from being glued, and they need flash removed, but look at those badass landsknecht motherfuckers, compared to this shytte: 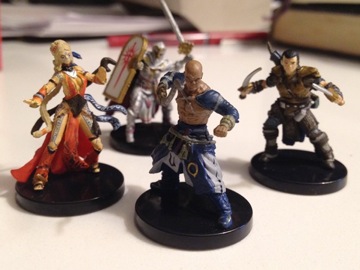 Next I’m looking at either Frostgrave or some of the Perry Twin’s foot knights box sets if I’m feeling a bit more 15th Century.