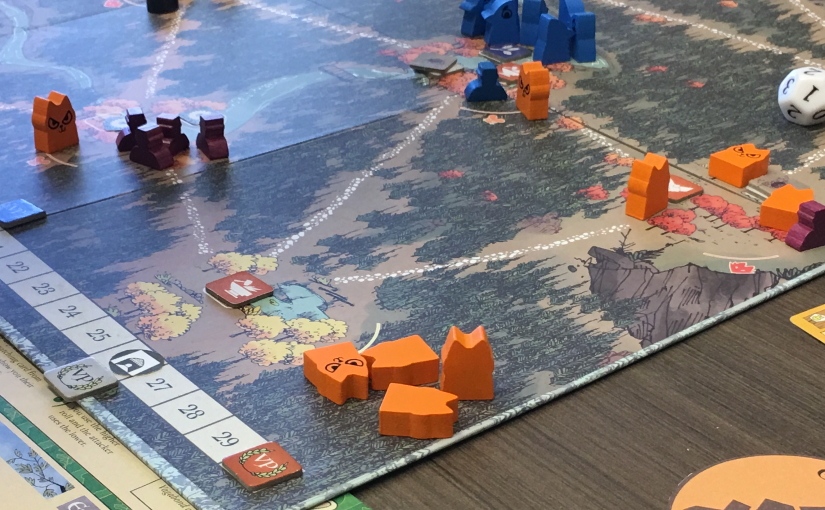 Ah the chaos of six or seven players in a single game of Root, the chaos is too good to pass up if you get the chance, even if Root was not really built for this many players. Just like Blood Rage: slipping in that 7th faction into the box begging to be played with TOO MANY players, Root has seven factions with the base set and expansions…so far.

While six player Root is insane, the core issues with the game at seven, with two vagabonds, is that space runs out really fast for area control factions (Cats, Birds, Moles), the crafting items run out really fast and double-vagabonds cause tons of chaos on the board with few repercussions to themselves if the other factions are fighting like crazy. While this may seem to give the vagabonds the win every time, in my experience, they end up in second or third place instead.

Who’s absolutely not winning big games are the area control factions. Cats have a rough time in every game due to very slow scoring and the huge risk a playing a dominance card entails with this many players– it’s nearly impossible to catch everyone out of position at the same time in order to pull one off. Birds need to expand and control, and the latter is nearly impossible with seven factions, many of whom will be constantly bombing off your big armies and roosts or co-exist-blocking your control/movement so you get that extra collapse you didn’t plan for. Moles can burst up wherever at first, but then they too get into the area control game in order to score points and not have their parliament destroyed (which it will). This is a small strategy guide for the area control factions with 7 (and maybe 8 and 9 players soon…).

Communication. With an experienced group, you could pull it off with the Cats, Moles or Birds, but you must work together from turn 1 enough to stop the other factions. New and even intermediate players don’t really talk enough and make plans, and that’s a mistake in this large of a game. You need to be constantly talking about everything all the non-area control factions are doing because it’s not always obvious, and certainly not as obvious as a piles of cats in two corners of the board, the spread of the birds, or the initial Mole’splosion.

I’m still learning the strategy of Root, but compared to any normal person, after nearly 40 games and quite a few big ones, I know everything. Below are some non-faction specific tips for the area-control factions. You better know your faction’s path to scoring well going into one of these big games (or not, it will still be fun), so I won’t go into that here.

What if you are not one of the area control factions? Baby, you got it made! Just lurk and do your thing. Alliance wants an empty board to spread sympathy–just keep the other factions fighting. Lizards want to put so many Lizards in each garden clearing that no one will mess with them, and help the vagabond and buy a ton from the Otters to score, score score! Otters want to coexist with their trading posts and then foment conflict– especially among the vagabonds. Try to set up a critical turn where you can get a lot of purchases (like when you draw a bunch of bird cards to sell, or critical bunny cards for the Cats) and then save that dough to score. From my games it’s either the Otters, Alliance or Lizards that pull off wins in a big game, so just play to your strengths.

I would say a board with 2-3 more clearings and another two ‘crafted item’ spots would help with big games. but I can’t really say for sure. The more spread out the board, the harder it will be to get in those critical attacks on the vagabonds, otter trading posts, sympathy and lizard gardens.

Lastly, did I say communicate constantly? The central conflict between the cats and the birds is totally null and void in this large of a game. Those two factions especially should be allied and planning together until the very end. I can’t wait until the Corvids and Moles are out and we jump in with 9!