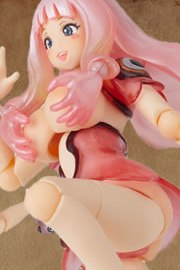 I don’t even know what this is nor where it’s from. I just know it’s frightenly awesome.  From Wikipeedia: ” is a series of visual combat books published by Hobby Japan, based on the licensed works from Lost Worlds. First published in 2005, it features only female characters in sexual art situations.”  And yes, if you were roaming around Hobby Horse in the early 80’s the Lost Worlds referenced are those strange little combat books that filled up the rack next to the microgames.