You’d think after all my posts on this blog about Talisman expansions over the years I’d get sick of them or sick of Talisman.   NO SIR.  While the Dragon expansion was a bit much for me, I’ve picked up everything else (Dragons changes the game very drastically while everything else integrates into the main game together) and am HUNGRY FOR MORE.  The City expansion we’ve only just started to explore and it’s fucking great.  No more stacks of gold lying around for no reason– spend them to win the game in the City. 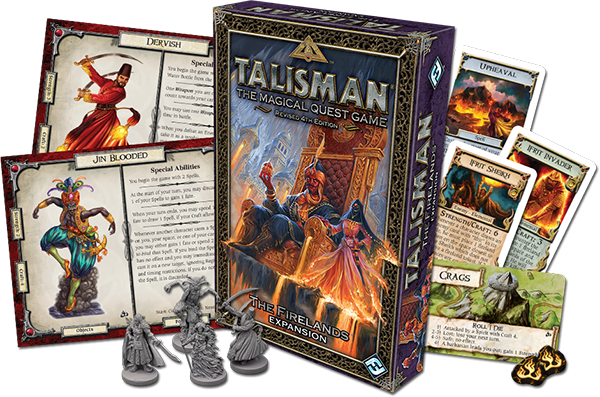 FF is delving into Arabian myth with the new one called Firelands and it looks pretty awesome— though like Dragons, it seems like it changes the game quite a bit by eating up spaces on the board.  The four characters are the Warlord (like the Gladiator), the Jin Blooded (spellcaster), the Dervish (can’t tell) and a fourth one that looks like a female spellcaster of some type.  This will be heating up the winter months it looks like.