Master of Orion is in early access and I jumped on that fucking space pysse bandwagon right away, they couldn’t take my money fast enough really.  Last weekend I spent most of Sunday powering through a game and I have thoughts and feelings.   If you don’t want to read it all here is what I think:  they’re not done, but the game is fun and is a solid base from which to build the new MOO.  The economy part works and is not annoying at all, the space combat needs some work but is pretty fun to watch.  You don’t make a lot of choices during it (like games such as Star Hammer or BFG), but it’s FAST which is the most important part. Multiplayer will be unbearable turn angst and will never be played by normal humans.

I started off this game missing the Meklars, who are my go to race in MOO.  My secondary has always been Humans because they always have an extremely strong trade and diplomacy aspect.  As long as you can keep your fleets sort of large, you’ll be in the game and be able to stay out of wars until you are ready to crush everyone.

So comparing the game to Master of Orion 1 and 2, they leaned heavier on MOO 2 than 1 for the galaxy design and management of systems.  Each system is a dot on the galactic map connected to other dots via star lanes.  You can only move from one system to the other via star lanes and not directly (at least at first).  This is quite a change from MOO1 where you can just move your ships anywhere (even to the furthest star in the galaxy) if your ships have the range.  I do not mind this.

Systems, like in MOO2, are solar systems with multiple planets and not just one dot like MOO1.  Ships move around these systems, not freely, but from object to object.  So they can move from a planet to an asteroid to another planet or to the star gate.  Fights take place at these locations and not, again, freely within the star systems.  This was good.  While not as simple as MOO1, it works.

Colony managment does not use the sliders of MOO1, which is something I was hoping they’d keep in.  However, they have these little people that you can move from FARMING, INDUSTRY, SCIENCE.  These little people may be members of your race or other races after you conquer them.  Some racial bonuses apply I think, so ‘collecting’ the other races to help you in science or manufacture is appealing.  Think a Human empire with Meklar building stuff and Psilons in science!  It’s clearly presented overall and works.  You can easily see when people are pissed off and not working as the little guys sit down with a protest sign.

Colonies gain pollution, and while this is a somewhat annoying feature, it’s easily seen and dealt with. You can see planets with bad pollution from the galactic view so it’s clear when things have gone wrong without having to drill down into the system.

Building stuff is in your typical queues where you can line up ships and planetary upgrades, up to 5 items at a time.  Building is slow in the new MOO so far and I really think they will change this going forward.  It takes a long time to get a bunch of ships made for example, and in that time I usually have 2-3 science upgrades. 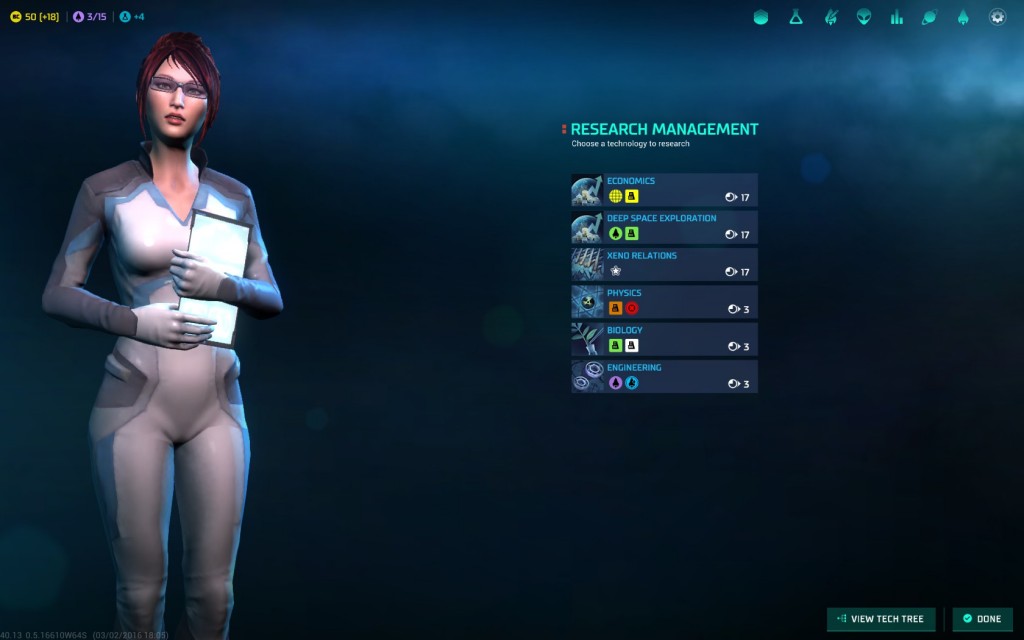 Science. It’s a tree we’ve seen over and over, and not much different there.  They do an interesting thing with some of the techs in that when you discover it, you choose between two applied technologies rather than getting both.  This is a trade opportunity with the other aliens who may have the other applied science.   You tech up FAST in the game compared to production.  They will likely balance this out.  I got up to TITAN ships before I mercifully ended the game for the Mrshaan, so not all the way up the tree.

Ship building is easily done, but I did not see a way to point ships to another ‘gathering’ system as they are built, they have to be moved manually.  Like the other games, ships are organized into fleets which move together at the slowest ship’s movement rate.  I don’t know how fleets are auto merged, but what I think is that it happens most of the time when ships are at an object together, which is sometimes good, sometimes bad.

Ship upgrades and modding is extensive, but frankly in the first play through I didn’t do much here.  I made some bombers and some large fighter carriers. Otherwise I just did stock upgrades (which are nearly automagic) when I got tech advances.  Sub-optimal? Yes.

Combat.  This is the one thing that the designers brought from MOO3– real time battles and they did it far better in the new MOO.  You can choose to auto-battle and for many fights, just like in Total War games, will be handled this way.  The important battles though, you can fight out in real time.   While moving ships around is possible, I just pretty much ‘went straight at them’ 90% of the time.  There are asteroids and other objects in space, and you can hide behind them to dodge shots, but really there’s so much stuff flying around that getting in close and just blasting everything is the way to go.   It’s pretty satisfying to see your ships blow the crap out of everything so I’m liking it.  As a Total War fan, I prefer the real time option to anything else.  This ruins multiplayer though, so I will say right now that just like MOO2 and 3, multiplayer will NEVER be actually played, and was a waste of time for them to add.  The only way to do multiplayer is the way Illwinter did it for the Dominions games.  You give your armies orders and in between turns ALL battles are resolved which you can watch, but not control. This makes Dominions games PLAYABLE in multiplayer for people not sitting intheir dorm rooms for a full week, instead of not. 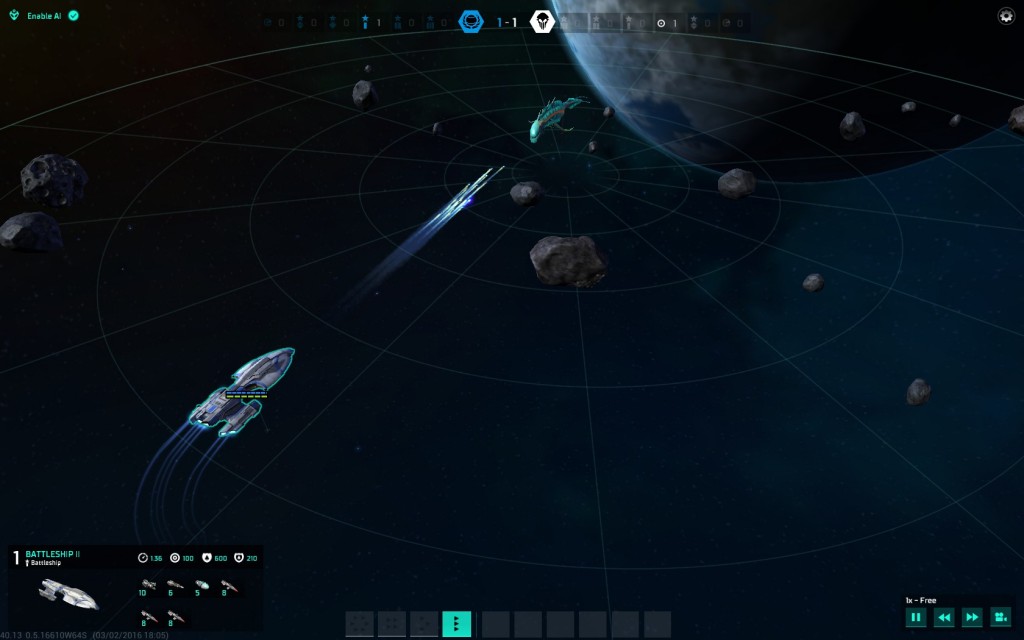 Planetary invasions don’t look finished, but it’s exactly like MOO1. Your guys land, they fight and whoever wins, wins.  My only issue here is that marine transports can be tough to build, and even if 99% of your marines survive the attack, you don’t have those transports anymore and the marines  sort of disappear into the aether.

Not all the races are in the game yet, but you’ve got your ‘humans with animal heads’ races represented already (Alkari, Mrshaans, Bulrathi, Psilons, Sakkra).  They are cartoony and silly and that’s just fine.  The Mrshaans are just ridiculous.  What I liked is that the race’s ambassador shows the emotion that they have for you with their body language– whether pissed or afraid or happy. Very Civ 4 like and Good stuff.  Some people may be put off by the space kitties and doggies, but that’s MOO.  Space kitties suck in a game like Twilight Imperium or REX which are otherwise DEAD SERIOUS, but since MOO is campy all around, it works.

The only thing good about MOO 3 was the 3d art for the races.  I think the races are OK in newMOO compared to that, but they could use some tweaks.

My biggest complaint about MOO1 and 2 is that the galaxies were too small. Espeically in MOO2– it felt fucking tiny even in the huge galaxies.  While I played only a medium sized game last weekend, it felt pretty big and meaty.  I want the shorter games like that to play for a couple of days, but I mostly want the MASSIVE galaxies that take months to conquer.

Management of big empires can be a bitch but I think it will work well in MOO and I certainly was not annoyed while playing the first game.  There is a queue of work items that need your attention before the turn can be run. This helps direct you to where you need to make decisions and after that you can do your other stuff.  You will never forget to change your tech or deal with a REALLY polluted planet for instance the way it’s set up.

Of course, near the end of the game you are basically running and adding fodder too a few big fleets and that’s what you want to focus on, I think that the new MOO caters to this by allowing you to just do what’s absolutely needed, and forgetting the rest.   Autobuild is there, so you don’t need to work too hard on colony management if you don’t want.  Like Total War games, I want to get to the fucking fighting and not dick around with my colonies, especially when I have a massive empire. I want the money and fleets pumping out, and let me get to the dropping of bombs on the Silicoids and destroying the fleets of the Psilons.

The designers just released a long list of stuff they are going to work on.

I like the game, looking forward to playing again (will be waiting until the next big patch) and one of the things I like is that these guys are not saying they want to make the best game ever, they want to make the best version of MOO ever, and here’s to that.  There is competition these days to MOO, but it’s Sins of a Solar Empire, Galactic Civilization and Endless Space and those are all complete trash none of which I would play over MOO 1 or MOO 2.