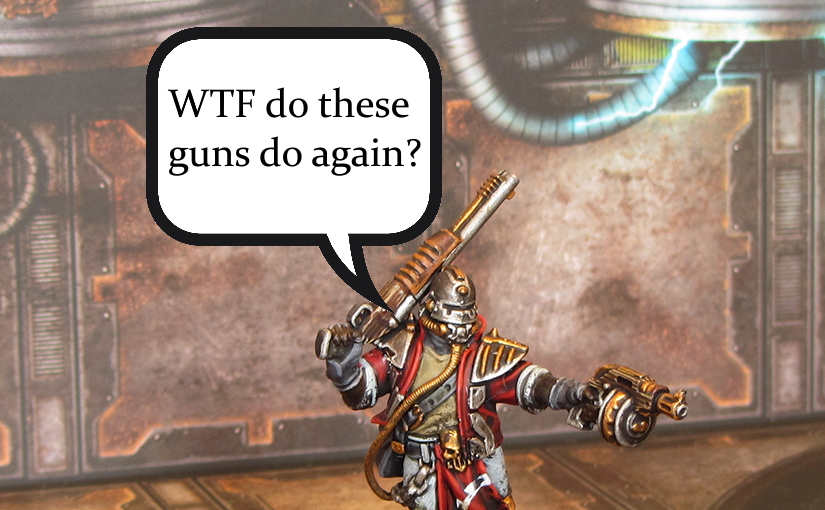 I got in a casual CASUAL game of Necromunda last week and what in the flying fuck happened to the organization of these rules? Seriously, this couldn’t be worse.

First, these are not overly complex rules, but there are tons of situational rules that enrich the game and the system. What is a drop rig? What does it do? What does Toxin do? What if something is on fire? Anyone that has played all but the simplest RPG’s (most of which are SHYTTE) will be familiar with these types of questions and it usually takes just a few minutes to look up the rule (and if there is a GM, they may make a rule on the spot to save time which is usually spot on for the situation anyway). Necromunda being a competitive thing most of the time, these questions need solid answers and can’t be hand waved by a GM. While the rules are certainly all there, they are scattered FUCK ALL throughout a ton of different books with the added bonus of having the original 2018 rulebook split between Basic and Advance rules (no one plays with the basic rules).

So the answer to the multi-rulebook issue would be to download and print on LULU the massive community version of the rules that includes errata and all that one needs to play, right? CORRECT, with the exception of that book being as FUCK ALL organized as the original books; going from core rules part 1 to special cases on tiles on the board game version, and then back to core rules. Or going from core rules to stats for a bunch of gangs and creatures that will rarely see play BEFORE going into the weapons and skills sections. In addition, it doesn’t even have an INDEX. Absolutely fuck all.

The Warcry rules are CLEANLY organized. Killteam’s rules are CLEANLY organized. What happened? This is not to say that the new Necromunda is bad at all, quite the opposite as it deals with a lot of the issues with the original version, but why the fuck would the rulebooks be like this? I can only imagine that they didn’t know that the Necromunda line would be as successful as it has and everything grew organically like some indy game where the designer has a day job? It’s really inexcusable for GW.

Anyway the game was good, though slow. Melta traps went off, there was renderizing and web-gauntletting (both brutal close combat weapons), toxic attacks, back stabs and hallway collapsing. A great time. I should have taken a bunch of pictures of the carnage, but I had my nose up the crack of the books the whole damn time!

Solution for next time: print the damn consolidated rules by UNIVERSAL HEAD.