Most normal human beings would never know anything about the drastic changes to what used to be Warhammer Fantasy Battle recently by Games Workshop.  Those few sentient mammals that even know what that is have another subset that know what Age of Sigmar is and another subset of those people post about it on the internet and this week, it’s been very important for them to do so.  This sub-set of a sub-set has had their cages rattled fiercely by a complete change to a steadfast, yet ancient, tabletop game that has stayed fundamentally the same since 1988 or so.  The results, just monitoring various outlets like Reddit (for the rather dull, but relatively nice people) and 4chan (for the awesome and ruthless and terrible) are spectacular.   After a series of leaks, and the game not even hitting the shelves, there are already pictures like this: 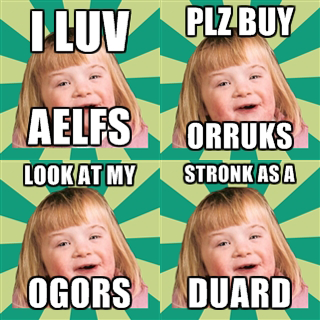 Needless to say, the reaction has been really negative so far for the rules and a bit berserk over the fluff and I think, despite the leaks prepping people, it’s just been a big shock to everyone.  The models are really awesome looking, but are they Warhammer? Certainly a departure from what was.  After looking at a bit of the rules, what I see here is a flat out 40k-izing of Warhammer Fantasy.  Good? Bad?  For play, actual tactics and fun, Warhammer Fantasy Battle is by far the better game between it and 40K, especially 8th Edition– but WFB does not sell as well.  You can say Spotted Cow is a better beer than Bud Light, and of course, it is, but Bud Light sells BILLIONS more to casual drinkers and people who ride their bike to the liquor store every morning and stay there all day.  Viva paper towels are far superior to everything else (you can REUSE them for fucksake!), but it’s a niche– people get the Scott standard crap because it’s cheap and works, just like bud light right?  I just see 40K as GW’s kids game where everyone mobs their stuff into the middle of the table and it’s a big close combat with tons of dice. Fun, but not really a tactical challenge– it’s more of an ‘army list’ game, where WFB is both an army list and a tactical game since mobility and placement is so important.  Sigmar looks like 40K. A lot.

First, Sigmar is skirmish level, with smaller amounts of models.  The rules are simpler than Fantasy with a reduced stat line and a different method of determining game balance that I haven’t figured out quite yet.  There are army lists, but they don’t have points like WFB.

Second, the close combat rules are very close to 40k’s.  This is not inherently a bad thing, it’s just not the brutal shield-wall clashes that are such the heart of the Warhammer Fantasy Battle experience.

Third, fluff.  I stopped reading the WFB fluff years ago, it’s just regurgitated shit for the most part that I read in 1987 and the early 90’s and since it’s all seemed like Fanfiction to me. Chaos, Dark Elves, Skaven– it’s nothing new anymore and there hasn’t been much change despite editions coming out every 5 years or so.  The 8th edition book has some AWESOME fluff parts in it, but I just couldn’t be bothered, except for the pictures, which I needed tissue and a private bathroom quite a few times.  The Sigmar fluff is where we get into part of the drastic change GW made after years of retread.  The Europic style Old World is gone and replaced with– realms, which without the actual books, I can’t comment on except it ain’t Kansas and it appears that it’s survivors of the Old World are fighting across various floating demon realms.  There’s been a storyline building with some of the WFB expansions that led to the END TIMES that destroyed everything, but really the kid getting his parents to buy the Age of Sigmar.  How I see it is stuff kept escalating from the 90’s to bigger MORE SPIKY MORE CHAOS and where could they go after yet another massive ork or chaos incursion?  You look at a unit of Rieksguard and while they look really awesome, they’re no SKULL CRUSHERS OF KHORNE.  The mundane simply was pushed out completely from the continual escalation of high fantasy elements.

Fourth.  Unit Cards.  Like Confrontation or AT-43, units and models will have cards.  What’s more, ALL cards will be released for older models this week in PDF form so we can take the rules from the new WD and start playing straight away. I think that’s pretty cool.  Why did Confrontation have Unit Cards?  For impulse-style movement.  Does Sigmar have impulse movement?  Nope.

Last, round bases.  Squares suck for skirmish, that’s just a fact, but you can’t rank circles, and those fucking trays they tried in War of the Ring (the big LoTR game that went to the discount bin moments after release even though the rules were pretty good).  This means they’re going whole-hog into the skirmish realm.

While I’m a bit shocked, I really think 8th Edition is amazing and based on GW’s other forays into skirmish rules (Battle Fleet Gothic, Necromunda, Gorkamorka, Lord of the Rings, Legends of the Old West) they have the chops to make a really great set of rules, not a solid set of rules or an OK set of rules, but an exceptional one.  I totally dismissed Lord of the Rings when it came out, and it took Legends of the Old West to show me that it was actually really really good.  Time (and plays) will tell if the system can hold.

Here are my predictions:

1) Sigmar is a BIG MONSTER SLUGGATHON type of game with massive and gorgeous monsters being the centerpieces of battles.  These miniatures will be some of the best ever seen in human history.  What we’re seeing in the base set is not indicative of the final set (like 40K with what a Maccrage battle set looks like and what a real 40K battle looks like with tons of vehicles)

2) There will be a WFB 9th edition that will be a set of rules for larger battles. It will not be like 8th, but will scratch that same itch (and we’ll be able to use our models)

3) There will be nostalgia UNRELENTING for 8th Edition and the oldhammer movement will continue unabated as well.