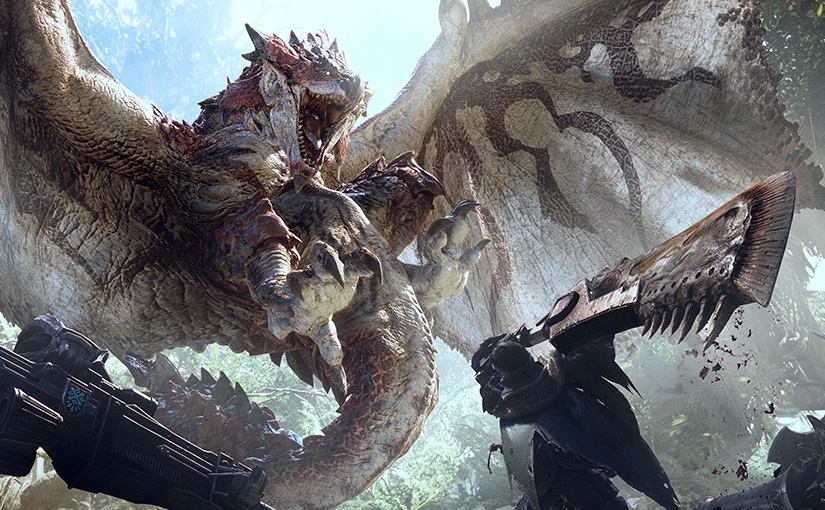 It’s been a LONG time since Monster Hunter has been on the consoles and we’ve been relegated to the DS to play it. It is an excellent series on the level of Torchlight and Diablo for it’s item management, customization and level of skill needed to play well.  The game was obviously a huge influence on Dark Souls (both at their core are boss-battle games) and the new version looks poised to bring everything that was great about the 3DS version into the modern graphic world of the PC and PS4.

First play was to kill off a fatty lizard thing. I was interesting only because it puked all over the place when you got a knock down on it. I was not able to get it mounted for more fun. The map this fatty is on has a winged T-rex thing wandering around, and if you draw aggro with both, you are going to be in trouble. I was not able to take down both of them in one go (killed the fatty lizard first and ended the scenario).

The second beasty is a rock lizard thing. It has a transform into some sort of bull-type creature and then retreats to a muddy area, and this is where things got good. Instead of swampy stuff just being poison, the mud area was very interesting as it had not only places that slowed you down, but places where you would actually get stuck and have to struggle out.

I’ve seen some other really cool things, like swinging on vines, monsters fighting each other, swinging with a grappling hook and somehow my Palico tied down one of the monsters for me to beat on. The environments are awesome and they still have the same FEEL as different ‘areas’ but there is no loading or break in between them. You can follow the monsters as they run away without hitting the loads, and that’s fantastic.

The game has a unique way of tracking the monsters with some sort of glowing flies that point you to clues where the monster is, such as footprints or ass-wipes on the ground. When you put attention to a clue, the flies point to the next one and when you get enough, they can point right to the monster. I thought this was fucking handholding at first because in the old game you had to hit the monsters with paintballs to track them when they fled, but it seems fairly decent. It is fun to track, but it’s also a bit more fun to get in the fights…

I didn’t see any mechanics yet for bombs or trapping monsters, but I’m sure that’s in there. Also you can’t really craft in the beta just yet– that’s a whole huge ball of complexity I still don’t fully understand in the old game anyway.

Color me impressed. I was hoping for a new version for the 3DS, but this is FAR better because I can play it with my friends on more common consoles and with these graphics? YEAH.  Lots of impressive stuff to look at here.  When this is out for PC, holy shit.