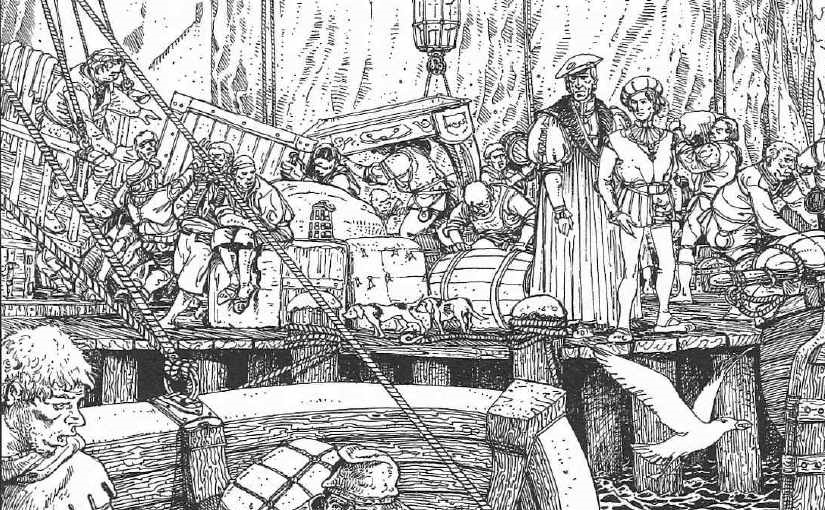 While Rol20 13th Age is in hiatus, I decided to bust out a LotFP adventure I have been working on and we’ve pulled a handful of sessions off.

Spring 1619, London. The adventure begins with the two fighters and the cleric being hired to find a strange cube rumored to be at a monastery in southern France by a representative of the new Lord of Manchester who wishes to gift the thing to a friend. They are given a map in a water-tight tube to the monastery, ample supplies and petty cash to spend on the way as well as a ride to the continent via a river boat that can make the crossing captained by one Remy Pardue. They were warned not to go to Paris (as the country had just been in a small civil war between the Queen of France and the heir apparent).

The group met the boat captain and his crew on the Thames the next morning. All went swimmingly until the boat was moored at Ramsgate after a day coming down the Thames. The group stayed at an inn and the next morning the boat, Remy and his crew and the map, and all of their supplies and monies were gone. They punched out the barkeep (who told them Remy was a bit sketchy) until he told them to check another, seedier, inn on the wharf for news of Remy. Just then Titus and Fred Fucher arrived with a message from the Lord of Manchester (or rather, his man), that they were given the wrong map and to send the original map back post haste. Of course, they didn’t have the original map any more…

Checking the seedy Inn (the Dried Boar), they found one of his crew, Giles Jegou, who our of guilt, could not go along with the theft and became summarily drunk instead. He told the group that they might find Remy at his mother’s house west of Saint-Omer, otherwise he had no idea where he was off to.

With help from the bartender, they got passage across the channel that day and walked to Saint Omer from the coast, not quite penniless, but certainly not in style.

Saint Omer was having a market day and the town was crowded with merchants and shoppers, even early in the morning when they arrived. After some inquiry and paying of bridge tolls, they found the farm of the Pardue’s and approached. Two of the characters waited in a flowering apple orchard overlooking the main house and the other three went straight there. They found an old woman cracking nuts on the stoop, a young woman with long black hair hanging laundry on a line (mostly diapers) and another woman with long black hair carrying a swaddled baby. The old woman was Remy’s mother and she spoke the English, though with a rougher burr native to Bristol and such unsavory places. Somewhere in the house another baby was crying.

Titus told her they had something for Remy and were trying to find him. She told them the price to find him was the same whether giving or receiving. She brought out a gaggle of children of many ages from inside and around the house and that they must pick one to take with them as their ward, since the farm was poor and there were constantly new mouths to feed as Remy brought his impregnated wives to the house with or without other by-blows.

They selected the eldest boy (11) and she told them that they could name him as well if they wanted (they named him Timmy). Then she told them that Remy had been at the house just yesterday and had gone on about finding a crew quickly and he had an opportunity that would make him rich. She said he then went to Paris and they should not have trouble finding him on the way there if they hurry (!?).

The party left the farm with the child in tow and went north to the nearest livery stable to purchase some horses. They had very little money and asked the stable master if there was anything they could do to procure some horses. With the chaos in the country those days horses were not easy to come by, and he offered them a few horses if they burned one of his competitors stables down without hurting any of the animals. After some debate, they agreed and got directions.

On the road south, near again to the Pardue farm, they came upon one of the women from the house (Lucienne), one of Remy’s ‘wives’ who told them that the old hag was lying and if they took her with them, she would tell them where Remy really was and take them there. They again reluctantly agreed (“Should we still burn the stables down?”) and Lucienne took them into Saint Omer in front of the Hotel D’Ville, a three story Inn with a brewery and stables.