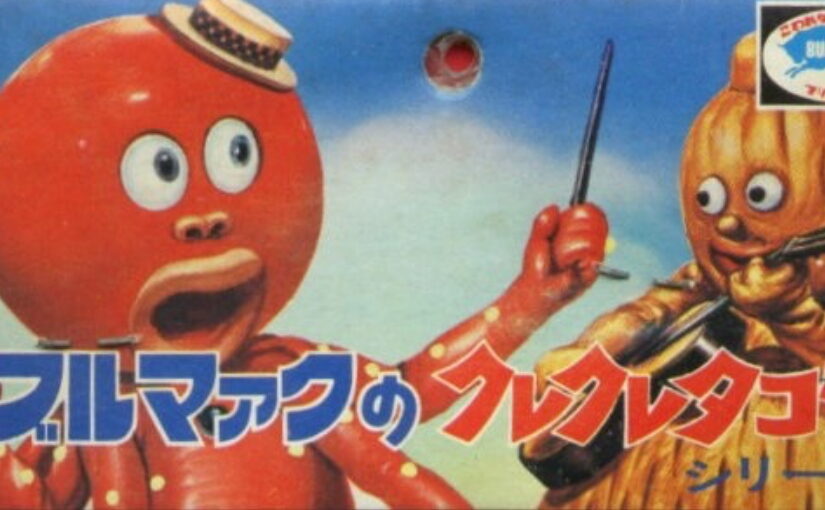 Years ago, I remember seeing some quote that there was a super fucked up Japanese show about an Octopus and a Peanut (it’s not a peanut, it’s a squash) who are in love with the same Walrus. I just happened on a youtube video by accident and BAM there it was in all it’s glory: Kure Kure Takora. While, completely in Japanese, without any translation available at all anywhere for 200+ of the 260 episodes, it’s still 80% understandable because it’s a kids show right? This proves the 70’s were a crazy time everywhere. We had Siggy the Seamonster and Kroft Supershow– Japan had this full bore insanity.

Kure Kure Takora not at all about a love story between a Walrus and an Octopus, it’s about two thieves, liars and hucksters running the jewels on everyone in their forest realm, robbing and tricking the strange inhabitants from the sole ‘police officer’ badger to a pack of sea cucumbers and a scary jellyfish.

I’m posting this here assuming you have never seen this at all, and have no idea what it is because you need to. This is an absolutely batshit show with near executions, gun battles, ritual suicide, characters running around deranged with katanas and two characters that steal anything not tied down or directly guarded and then usually suffer for it in some way. A few of the episodes were too messed up to even air during the show’s run from ’73-’74, but not very many.

Also note, this is a Kaiju show as in, grown people in rubber suits and all practical effects. Here are a few key episodes that I can generally understand what the hell is going on. Buckle up.

In this episode, Takora and Chonbo ambush Biragon (an iguana) and take his paper-recycling/toilet paper cart. Then they proceed to collect paper products from the forest denizens starting with Shiku (a sea cucumber) who brings a big stack of paper– only to receive a SINGLE SHEET of toilet paper, while giving Monro (the Walrus) more rolls than she can carry for a tiny pack of paper. When he complains, they beat his ass!

Another cart theft episode. This time it’s Shiku (again, a sea cucumber) who has a newspaper and banana cart. Takora and Chonbo knock him down with a club and proceed to take the cart and when he complains they take his bell and knock him out. No one will buy anything so Chonbo gives away the news papers and then they trade the newspapers for the bananas. None of this makes any sense.

This time Takora and Chonbo ambush Hera (one of the Cucumbers) who has a saw and garden shears and is dressed as a gardener (?). They go to Monro to trim her trees and they cut down everything and she beats them with coffee cups. They go through the forest cutting phone lines and hoses and then Chonbo gets the idea to cut off one of Takora’s arms, which they do and it doesn’t end well.

In their forest there is only one character worse than Takora and Chonbo, and that’s the Jellyfish To Ro Ro. Almost every time they mess with this guy they get clobbered or worse. In this episode, they try to steal To Ro Ro’s fan. I looked it up and he sprays vinegar out of the top of his head which is what octopi are prepared in to eat in Japan, making To Ro Ro Takora’s nemesis.

In this episode, the cucumbers are making ice cream and when Takora shows up, he is shoed away by the badger. Chonbo uses a magnifying glass on a pole to melt the ice block they are using in secret and then they show up with a new one to save the day. Chonbo and Takora make ice cream for the cucumbers but they poison all three of them and steal the ice cream maker and start making it for themselves until the badger catches them and they are tortured for the remainder of the episode!

There are a ton of episodes to watch on Youtube now after they were pulled for copyright violations years ago, so go watch them. This is a treasure trove of crazy 70’s goodness that I have gotten really addicted to watching and have no idea how I didn’t try to find this stuff before. I cannot imagine how hard the crew and actors laughed and laughed making this stuff.