We haven’t done a game review on here for awhile, mostly because I’m lazy and Maurice!bastard had unprotected sex.

Amidst the river of shit that gets published to the iphone, there are a few, and I mean few, great games. Implementations of classic board games aside, there’s very little of worth that’s original on the iphone.  Especially sad is the fact that there are incredibly few 4X strategy games of any worth at all.  No one has even been able to copy MOO properly, usually taking that basic, clean premise and layering it with a bunch of shite or half-assing it with no diplomacy or trade. Rebuild 3 is not in that river of shit,  Rebuild 3: Gangs of Deadsville is a great little 4X game for your phone!

This is a zombie game, which there is the first facepalm in even considering buying it. However, I’ve learned my lesson that no matter how fucking played out a genre or trope is, it can still be handled in a way that makes an enjoyable game– AKA: Dead of Winter–an amazing game at what could probably be called the end of the zombie craze we’ve just lived through since 2008 or so.  Or maybe it’s the beginning of a new one? 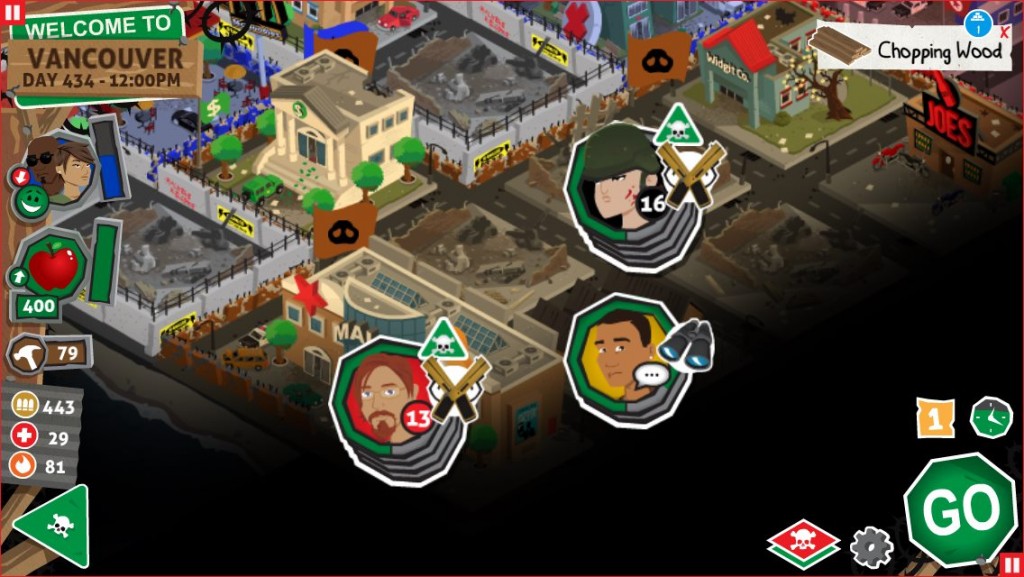 Rebuild 3 is a 4X game. It has elements of Civ and all the various 4X games you’ve played and loved in the past.

Rebuild 3 is an RPG (a bit), with character leveling, character interaction and plot advancement based on character choices.

Rebuild 3 has a plot. While the ‘levels’ are like Dungeonkeeper where you conquer a thorp or town with your gang and then move on to the next one.

This sounds like a recipe for disaster does it not?  An RPG 4X with an overarching plot?  Dangerous, yes, but this game works.

You start the game with your avatar that ends up being a 100% badass at just about everything.  This is your character, and I think if he or she dies it’s over (this never happened to me so it may not be possible).

The first phase of any of the scenarios is survival and expansion.  Like All good 4X games, before you get to any factions you will be assailed by non-aligned ‘creeps’ in the form of hordes of zombies.   You spend the first phase cleaning out zombies and building a big wall around the spaces you want, especially hospitals, workshops and the like.  During this time you increase the size of your gang by finding lone or coupled survivors around, they will have certain skills that you will be able to use.

Each survivor has a core skill among as set of skills. This will denote them as good for fighting, building stuff, research and the like.  You can train these artificially in a school once you find one and kill the zombies in it, or assign the characters to do something and they will get better at it.

Once you fight off nearby zombies, you will encounter other factions.  These are pretty quirky and have different goals (they are not generic at all) and things that they do.  They can be destroyed or you can fulfill missions for them and ally.  Alliances and enemies only last on the map that you are currently on, so the situation can change if you meet them later in the game. 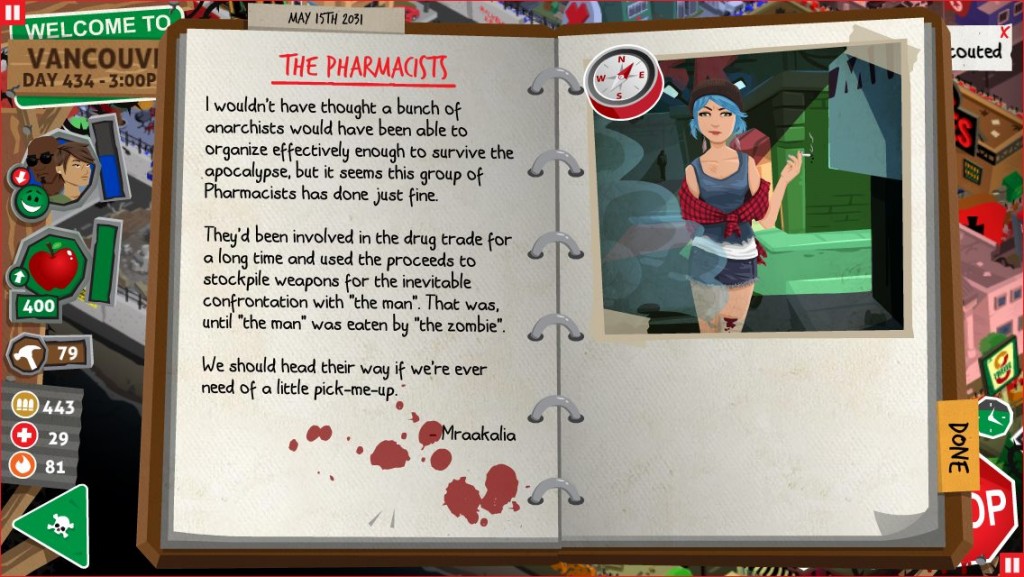 Eventually you get to some huge maps with many other factions, some of which will be destroyed by others or zombies before you can get to them.  It’s quite fun to race to see who can wall off and defend areas in the cities first.

Items!  Since there are characters in the game, they naturally have to be equiped right?  Well there are tons of items in the game: various weapons from crowbars to miniguns, tool boxes, medical kits, zombie traps, etc.  All either built or found out in the city.  It’s part of the addiction to kit your guys out to become super searchers or mass zombie destroyers. While not complex, this is a great part of the game.

The campaign involves your gang trying to solve the mystery of the zombies and destroy factions that stand in your way to do so.  You end up having to take over more cities than I can remember, with a giant showdown at the end in what I think is Vancouver.  The game builds in complexity as you go along, sort of easing you into destroying other factions as well as the different zombie types.   I tell you straight I ‘finished’ the game, but I didn’t exactly win.  There are some multiple endings going on here that may add to the replay-ability.

I have a 5S, so the screen is pretty small.  This would be much better on a 6+ or an ipad.  On a 4S I would be hard pressed to even bother with this frankly, the form factor is just so small and the text is tough to read.

Replay-ability is there, but it’s not great.  Ever since finishing the main campaign, I haven’t started up one of the city conquest games yet.  The main campaign is LONG so this may explain it.

Rebuild 3 will get it’s zombie meathooks into you if you let it.  This gets the highest possible score here at Mraaktagon of a 1.  If you have an iphone, buy it. You will like it if you have a big enough phone that is.