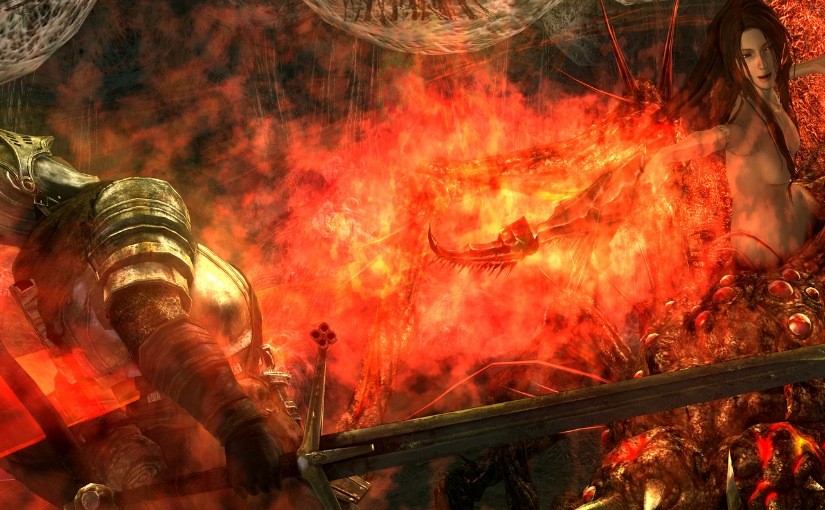 Because today, after 4 years, I beat Dark Souls.  I think I bought it the week it came out, and it took me longer to finish it than it took FROM SOFTWARE to make Dark Souls 2 and Bloodborne.

Shameful? I don’t think so.  Dark Souls is a difficult game, but it’s a fun one.  The fun keeps you coming back for more abuse, but when you get beat down pretty bad, or get stuck, or get into a farming rut (where the stuff you are trying to farm takes a lot of practice to git gud enough to beat consistently), you may need to take a break. I took a lot of them, some months at a time.  Unlike Red Dead and Bayonetta (and a few others), I kept coming back to Dark Souls.  It really is that good.  I’ve heard complaints about the camera and the controls (and the difficulty) but frankly the controls are brilliant, the camera is just fine and the difficulty?  Let me expand on that a bit.

First, the game takes skill in two ways. First you have to learn how to fight and if DS is your first FROM game, you are going to have to learn the fighting system.  The core features is that you need to actually hit your opponent with your weapon (seems odd but watch any World of Warcraft or Diablo 3 video for the contrast) and a lot of the things that work in a normal fight work in DS, like keeping distance, feinting to draw out certain attacks, circling, parrying and blocking.  Seems easy right?  Except that your AI opponents are doing some of the same things!  All of your moves take stamina, and that’s probably the strangest thing to get used to– when you move around or get hit or attack, you use stamina.  If you block an attack that exceeds your stamina, you will get staggered– and usually fucked.  Heavy attackers, like bosses, or groups of small attackers will chew through your stamina like crazy– and you have to figure out how to deal with it, either through the movements and blocking you do, or equipment because…

Secondly DS is an item management game, just like Torchlight or Skyrim.  There are tons of items and weapon sets in the game and most can be upgraded, some to godlike heights.  You need to know what type of weapons you want to use, how to use them (this takes a lot of practice) and then learn how to upgrade them.  I ignored the item management portion until the last half of the game and I suffered for it.

Unless I get the DLC (likely) I won’t pile into DS again for a long time, so bear with me as I take a trip down memory lane for my own future enjoyment here.  This has spoilers (just a few).

Bosses that were rough

The first bosses were pretty easy, nothing too crazy there.  However, when I got to this guy and his fucking DOGS, who is just a mini-mid-boss, I had to take a break from the game for a long time.  I just could not get past him.  The combination of the dogs knocking your stamina down and the massive stamina damage that the Capra can dish out is brutal.  As this is fairly early in the game, it was teaching you a lesson about what to prepare for later and how to deal with stamina issues like this.  I ended up beating him when I was just showing Matt the game on a whim over Xmas break (probably in late 2012).

Yeah, shortly after the Capra is the Gaping Dragon, which is one of the scariest monsters in the game.  I don’t think this would be a problem now since the thing is so big– but I had a lot of problems getting him dead. I used the sun bro to help and then it was off to Blighttown…

After that, I sort of got on a roll.   Even though Havel and the Hydra and probably a bunch of bosses I can no longer remember took me a long time to beat, none of them were a huge problem.  Queelag I did pull a summon in to help, but that was just to save time really.  She was a cool enough fight to not mind and also, tits.

However, Andor Londo is where I’ve heard people say the game says “fuck you, welcome to Dark Souls!” and they’re right.  There are two notorious parts to this beautiful cityscape.  The first are some knight archers that you have to come at on ledges.  Their bows are bows used to kill DRAGONS, so you go flying when hit to, you know, your death.  This wasn’t even a boss and it made me want to eat my controller.  After that, of course, is the most difficult boss in the game, which is actually two bosses.  Smough and Ornstein.

These guys are total dicks, and really this is a gateway to the game since the actual ‘plot’ starts after these two guys are beaten. You figure out (sort of) what you are supposed to be doing to beat the game except for just going around different areas after the bells of awakening have been rung. I had the sunbro AND another person help me with this fight, but I knew if I got stuck there, I would not finish the game, so sucked it up and farmed humanity from the rats in the sewers to run it as a human with FRIENDS.

After these dudes, I have to say the rest of the bosses were much easier, especially with the internet helping. Except, of course, for the last one. The final boss reminded me of the Capra Demon above in that he has completely relentless attacks, does massive damage and drains the shit out of your stamina bar. And then you die again and again and again. I think I was able to get past ALL of the knights guarding him without having to use an estus flask.

Here was my item Build at the end:

While the boss fights are intense and ‘big events,’ in the game, Dark Souls is so much more about the exploration and the world you get to experience. It’s basically a huge undead prison with a lot of mean people nearby that want to fuck you up.  The way the world map is set up is like some huge puzzlebox that you unfold during play, it’s quite amazing.  I even enjoyed the worst area of the game, Blight town, quite a bit despite it’s insane difficulty working (slowly) through it.  And if you ever get stuck there, remember, at the end there are TITS, so keep going.  Though the story is explicitly sparse, there are some dramatic parts and some subplots going on.  What happens to that preistess in the beginning? What happens to the first firekeeper?  Who is that knight that you talk to early on?  What is going on with SUNBRO!??  That said, with both Bloodborne and Darksouls 2 out already, I am not sad to finish DS1, since there is MORE mayhem to wade through.

I did fight about 20-30 people in PVP.  Most of the fights were due to the Forest Covenant ring which summons you back to the forest when people show up there to kill them.  I was probably invaded 5-8 times and won only a couple of those invasions. Most of the time there was a fire blast and I was killed in those situations.  In the Forest, it was a bit more even but I still didn’t do great. I ran a SUPER tank build and a lot of times I would swing my sword and the other guy would not be expecting to get hit stunned and then would be lying down shortly after. I found the mutiplayer mechanisms, both invasions and helping people out to be extremely innovative and excellent. If you want to get invaded or help someone, you can, if not, it’s a single player game when you want it to be.

In the end, Dark Souls is a modern classic whose popularity keeps growing and growing for good reason, why would people play PVP in WOW or Guild Wars when they can PVP in Dark Souls?  And even if you experience just a part of it, say up to the Gaping Dragon at least, you will have experienced one of the best video games ever made.