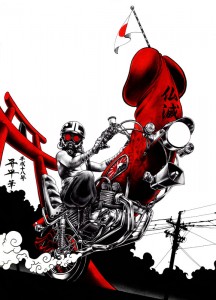 I work near one of the busiest intersections in the city and there are Harley’s everywhere.  I’m in an open office so I get to hear people complaining and saying things like “fuck my life” and “I come back and there’s all this fucking noise outside” or “I should have stayed home to work with all the kids there — it would have been quieter.”  The worst thing about it is not the constant 1930’s technology bikes driving around with no mufflers, it’s the COP and ambulance sirens that blare out when some bullshit is happening— and it’s gone off twice and it’s only 10AM.

In terms of actual danger or getting beat up wandering around (which my mom seemed to think would happen)– there’s just no way as these people are fucking OLD.  I’d say that off their bikes, they wouldn’t be able to catch anyone running at all– or even be able to chase after someone.  Granted there are some big people that could punch you through a school, but pushing mid sixties as an average there’s not going to be a lot of sprinting after people to beat them from this crowd– though they are probably.