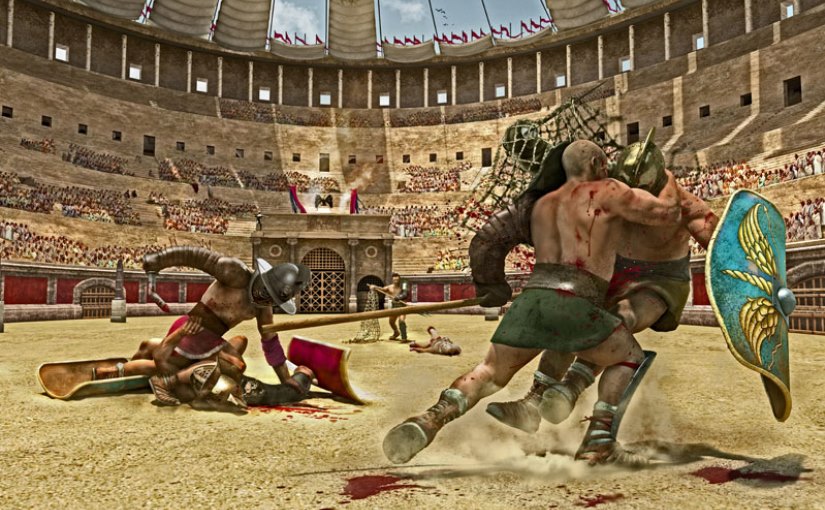 To show off the combat system for those who had not experienced it yet (and Matt, who has), I decided to put together a little player vs player gladiatorial combat action using Runequest 6 based on this article.   I rolled about 15 Gladiators for RQ, priced them based on their stats (mostly looking at AP, Combat Style, Damage mod, Evade and Endurance) and had the players buy them with 1000 sectartiis.  Most gladiators were about 300s, but a few hardcore guys were more.  The only requirement was that they had at least 3 fighters for 3 rounds of that day’s games.  The winner of each round would receive $$ and if any gladiators were killed, the owner of the killer would have to pay up, just like in real life.

If they had $$ left over after buying fighters, they could buy luck points for 50s.  These could be used at any time for any gladiator to force a reroll on another player, or reroll the dice themselves.  Once used for the day, they were gone.

I did use miniatures for this fight to keep things clear.  Everyone was close together and there were no ranged weapons, so it made it easy.  We had three players for these events, again with 3 gladiators each and a few luck points between them.

The first round was a fight with a bear, naturally (I recommend all new players and GM’s start with an animal combat of some kind, like a hunt or bear attack).  The players threw in one gladiator each and they went to town.  The combatants were:

Beaire the Nasty, a Thracian (note, these guys have big shields, but only a hooked DAGGER)

Tecocia the Reaver, a Retiarius (the net and trident dudes)

There was some early confusion as to what the bear would do with the net being thrown onto him, but I made the call since he didn’t know what it was, he wouldn’t parry.  Needless to say, the bear didn’t spend a lot of time parrying, and mostly spent his time attacking.

Nesset was able to impale with his short sword, but it did not hinder the bear’s skills at all (based on a size chart of weapon to creature/person size).  As a group, they were able to fend off the bear for a bit, long enough for Tecocia to net it so it had difficulty attacking and then impale it with the trident (which did quite a bit of damage).  Unfortunately, the poor Retiarius decided not to parry a blow from the bear and had his leg torn off for his trouble.  The remaining two gladiators were able to hack the bear down with the trident still sticking out of him, and survive unscathed to the cheering of the crowd.  While it seems forgone conclusion, things could have gone terribly, terribly wrong for the gladiators.  Without the retiarius, I think they would have been bloodied meat in the sand mostly because the Thracian and Provocator use their weapon special effects to good use vs humans, but not so much vs the brawn monster that is a bear. 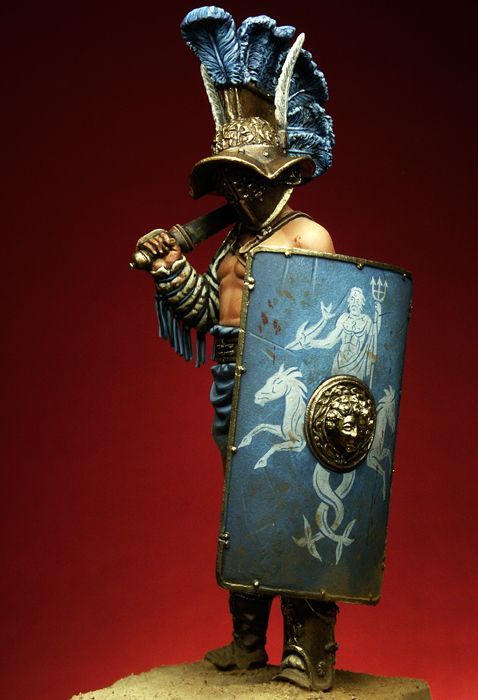 The second event was the individual fights between gladiators.  The players put forth their champions and lots were drawn to determine the fighters.  I stepped in because we had only three players in order to give a fight to the odd man.

The combatants in the first fight were

This went back and forth and really caused us to look in the rulebook a lot for being prone, tripping, different weapon lengths and a few other rules since the spear and the short sword were two weapon lengths apart.   While I love the RQ6 book, not everything you need for a rule is in the same place, so there’s hunting and pecking.  Also in this fight we ran into some trouble with players taking a long time to pick special effects–  the android app would have helped here, but no one had an android, so we had to use sheets of paper and my homemade GM screen.

This was a reach fight.  The Hoplomachus was able to keep the Murmillo at bay for most of the fight, despite his small shield he was able to defend mostly by backing away.  There was a big difference in combat style % here, with the Hoplomachus at 82%!

Eventually due to sheer luck, Coprica kept getting hit in his unarmoured arm (among MANY armored places) and passed out from the shock and blood loss for a win for Papamillia the Hoplomachus.

The second fight was the fastest RQ6 fight I’ve ever experienced.  The combatants were:

Nesset the Ugly (the Provocator from the first animal fight)

Necnipro the Doomed (a Dimachaerus, which has only leg armor and two short swords !???)

I figured this would be a chance to see how the FLURRY special effect worked since that’s what the Dimachaerus’s come with, but, Nesset engaged and attacked… and fumbled his attack roll! Necnipro succeeded with her parry giving two special effects (and access to the attacker fumble special effects) which were Compel Surrender and Force Failure.  This means the combatant would normally get a willpower roll to resist the compel surrender, but the second effect, only usable when someone fumbles, forced the failure.  Nesset, while unhurt, was booed by the crowed and probably died of shame in his heart moments later.

The final battle was a free for all melee with four fighters and would be a long slough to the end.

The combatants (in order of strike rank):

Necnipro the Doomed (Dimachaerus fresh of her 2 second win over Nesset the ugly!) – two short swords

Ecaubus the Monstrous (a huge Gual/Sartar with a broadsword and big shield, but no other armor).

Misuae charged Postastis (here on out, called mouse and potatoes) and while the Retiarius got in some shots without parries from the Provocator, his armor saved him multiple times (warding location with that fuckn big shield helped too).  Mouse was just unable to close the distance for long versus that trident and even hit himself in the leg with his shield at one point.  Eventually though, the Provocator was able to strike the spear arm of the Retiarius and forced him to drop his trident.  Mouse carried on with only his net until…

Necnipro and Ecaubus had the exact same strike rank in this fight, and this was odd since if one declared and attack, the other parried and… could attack again?  We didn’t have time to look into the rules much for this but a few times both gladiators simply attacked without parrying at the same time.  In one exchange, Necnipro got a bleeder on Ecaubus and nearly severed one of her arms.  She stayed in the fight and impaled Necnipro with her broadsword.  Necnipro in a display of bravery, pulled the broadsword out of her abdomen, made her endurance roll and fought on, twice forcing Ecaubus to check willpower or surrender (who made very good dice rolls to stay in the fight).  Nearly bled out, Ecaubus had the last laugh and took Necnipro (remember, armourless except her legs) out of action.

The Gaul (Ecaubus) then ran and attacked the Retiarius who had regained his trident from the bloody sand and was warding off Mouse again.  We were not sure whether or not the longer weapon (trident) could hold off the broad sword and deemed not because one was L and one was M.  Ecaubus got a special effect and compelled Mouse to surrender.  Even while bleeding out (she was at formidable skill difficulty at this point) Ecaubus the Monstrous was able to hit the Provocator and that was the end of it– until the owner of the Provocator remembered a luck point and using this, was able to keep the fight going and force surrender on Ecaubus the Monstrous who would have probably collapsed moments later from bleeding…

So that was that.  There was a lot of discussion about the nature of opposed rolls, which means that if both parties succeed, whoever gets highest without going over their skill wins the contest (an ideal roll would be 95% [corrected from 98%, which is an auto failure] if you had 100% skill).  This is one of the subtle yet awesome things about RQ6 to keep the game moving and not have ‘nothing happen.’  Granted attacks/parries are not opposed rolls, so there can be times when, if both opponents have the same weapon size, that they bounce off each other in the attack-parry sequence. However, shortly something will happen when a failure, critical or fumble comes along.

There were a lot of new rules I had not had to deal with in the Vikinthulhu campaign yet, so we had to look up a lot. Things in the heat of the moment could not always be made clear.  Issues we had specifically were around:

Overall a good time and great practice for me as a GM.  The special effect selection slowed everything down more than I would have liked, but this could be helped with a better organized cheat sheet that shows normal special effects, critical ones and ones only on fumbles.  A sheet specific to each player with just the special effects they can use based on their weapon-set would be cool to make. OR if that special effect app was either web-based or on IOS would help