I finally got to bust out my Old West miniatures and town over the Xmas break after almost 5 years of on and off painting for everyone’s virgin gun down.  We used Wargame Foundry’s The Rules With No Name to good effect as it’s a great pick up and play set of rules.  I just made up a scenario where a wagon tipped over in the middle of the town, breaking open some luggage that was filled to the brim with gold!  We had three players, and each player had three models (two gunman and one shootist) and won if they could survive or get off the board with the most gold in hand.  Gold was gathered by moving into touch with the wagon and rolling a d6.  I had to make up the action deck for the game before hand, so the players didn’t get a chance to pick their models from my meagre collection, but I did allow them to give them names, a fun way to start off the shootin.

TRWNN has an interesting impluse system for initiative wherein you build a stack of cards made up of all the models in play and add in a joker card (that instigates a reshuffle of the deck when drawn) and one card representing each class of character (Civilian, Gunman, Shootist).  The cards are shuffled and then drawn to determine who’s turn it is to act.  You can’t hold back a model’s turn and you don’t really know when each model will move again, so it makes for an aggressive game without a lot of dilly dallying around.  There is a way to control when your models move if you get a bit lucky.  When a class card is drawn, a player can take that card if one of his character cards is drawn next that is equal or above that class level.  For example, if a Gunman card comes up, the next card drawn is a Shootist or Gunman character, that player of that character can take the class card.  The class cards can be used to interrupt other model’s turns at any point (even in response to being shot at) to give another model an insta-turn.  This system gives a semi-random feel to the order of turns, and my only complaint was that some characters don’t get to move turn after turn if the joker card just happens to come up a lot.

This system of impulse is very much keyed to individual models and wouldn’t work too well if you were trying to simulate fights in big groups unless, like Confrontation, you allowed multiple models to act when a single card was drawn.

All I can say about this particular game was that my dice were the hottest I’ve had in a long time, and I almost felt guilt as my tiny lead men shot the tiny lead men of the others again and again.  One of my gunman killed outright two models in his first two turns of shooting, and I had my shootist out in the open, completely out of position relative to one of the other shootists, only to have one of the other shootist’s shots all go wild– and then said shootist was gunned down instantly with just about the best rolling you can have. See below. 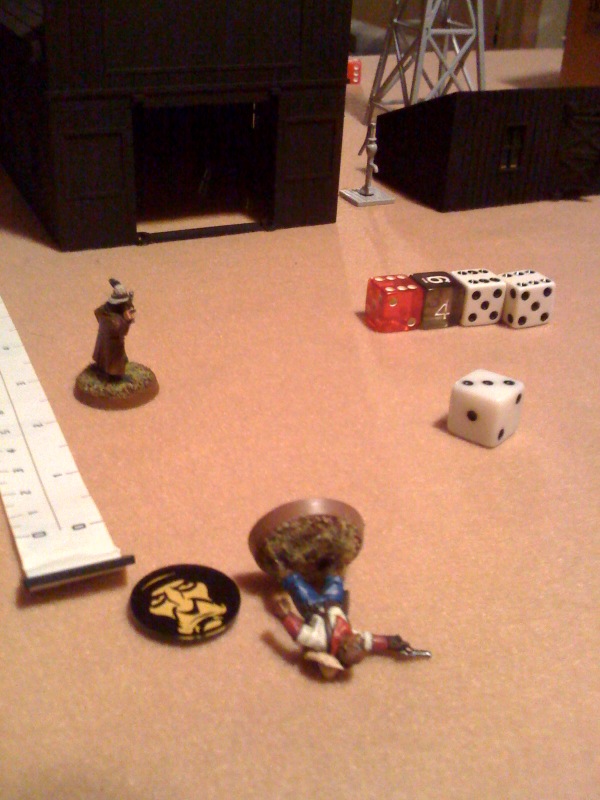 We did not use the morale optional rule and this revealed an oddity about the TRWNN system– models can be wounded over and over and over at point blank range and still have a good chance of staying in the game (a model can be knocked out and come back on a dr of 1 whenever that model’s turn comes up).  One of the models had been shot and wounded 12 times and was still on the table, granted he couldn’t move, reload or turn in place, but he was still there, holding gold.

I would absolutely use the The Rules with No Name again, especially for pick up games like this.  It’s very beer and pretzel’s and though the scale seems to work best with just a few models on the table, the level of detail with the shooting and wounding is such that this isn’t a drawback, but simply what the ruleset is supposed to simulate.   Eventually as I get more models painted (in the next decade or so) I’d love to have a go with the Legends of the Old West rules, but that’s a dog for another day.