I headed down to Gencon on nearly a whim and it was pretty good. This means that I haven’t missed a Gencon since 1992.  That’s a LOT of Gencons.   This year I was trying to take a break after the insanity of the 50th anniversary last summer and all that, but broke down with both desire and some peer pressure from Matt.

Matt said it was his favorite Gencon ever as he got to game a lot and didn’t have to waste time on taking FAR too much time going out to eat, which is a massive timesink when you add it up.  Going to the RAM for lunch will take at least 2-3 hours minimum and then you are spun back into the Con drunk.

I only went on Saturday for reals and after wandering the hall a bit (trying not to buy anything this year), I got over to the CUBICLE 7 booth and had a chat with none other than Graeme Davis of WFRP fame who was showing off a binder with pages from 4th edition.  Mr. Davis, along with others, wrote the Enemy Within, Shadows over Boganhoffen, Rough Night at Three Feathers and many other great modules for one of the most important RPG’s ever.  WFRP 4 is going to be a merger of 1st and 2nd edition WFRP with nothing from Fantasy Flight’s 3rd edition (no funky dice or chits all over the place or cards for actions).  In addition, he has been tasked with writing the 4th edition Enemy Within in which, he said, would be surprises that help if players have played the 1st edition campaign as well as doing it closer to the original 1E edition.  Davis also co-wrote the 3rd edition version of the Enemy Within for Fantasy Flight.  Talking to Mr. Davis about this subject made the failed BIRD ride from downtown Milwaukee and drive down to Indy the night before totally worth it– the rest of the con was GRAVY.

After that WFRP fangasm, we got in another game of Rising Sun and I pulled out a win, which was the third in the row with different clans (the Fox, Butterfly and Turtle clans respectively).  I don’t usually win Blood Rage, though I love it, so I’m not sure how it’s happening with Rising Sun except via simple experience.  It’s becoming a favorite of the group.

I got in a game of Runequest (the new version from Chaosium) that was OK, the pre-gen character sheets were in the same format as the Free RPG day ones and they really sucked.  Please just list the fucking spells instead of saying “all common rune spells” so that the players, some who are totally new to RQ, have to go look them up in the book that they don’t have.  Another issue with RQ as a CON game is that it expects and demands vast knowledge of the Glorantha background, which, IMO is something to be slowly revealed over the course of a long campaign.  People aren’t going to know all the gods of the Glorantha pantheon– so don’t do CON scenarios that expect players to have that knowledge at all.   The scenario was a typical Glorantha one, with some Broo and some chaos getting all over the place and having to be cleaned up, but had a lot of stuff about the Lightbringers and Orlanthi stuff which all had to be explained in detail.  It was pretty good, but I just do not think Glorantha-based Runequest is much of a CON game.  System wise I miss the Mythras special effects in combat–they copied RQ6’s excellent Passions system: why didn’t they copy it’s superlative combat system as well?  The new RQ Glorantha book looks beautiful though, so should be picked up at some point.  They only had 200 at the CON for sale and I think they sold out pretty quick.

After RQ, I ran DCC for the gang in a very large hall of people and had to talk really loudly. I had to run down to the business center in the hotel in order to print off random characters for the game at the cost of 8$.  I need to remember to bring a huge stack of characters EVERYWHERE I go.   The session was pretty much proof that you can run DCC anywhere under very severe conditions.  I did Frozen in Time which is take on Expedition to the Barrier Peaks except all DCC.  We got fairly far into the module until people started to fall asleep on account of the hour and the drink.  That may be one to finish off.

Other than wandering the dealer hall a bit on Sunday and pestering Tom Babbey at his art booth, buying the obligatory DCC modules, that was pretty much my GENCON. 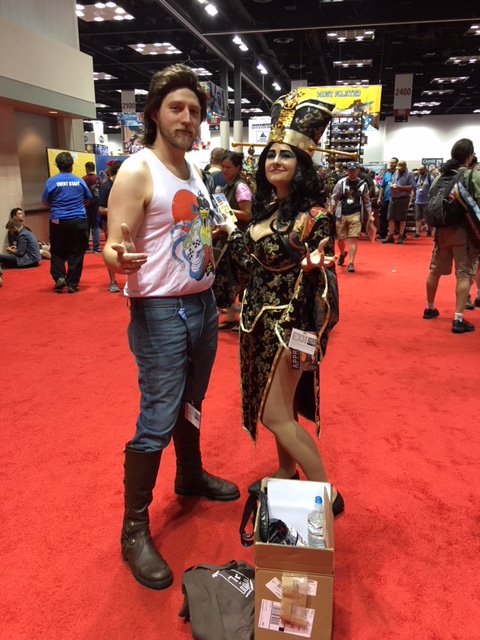