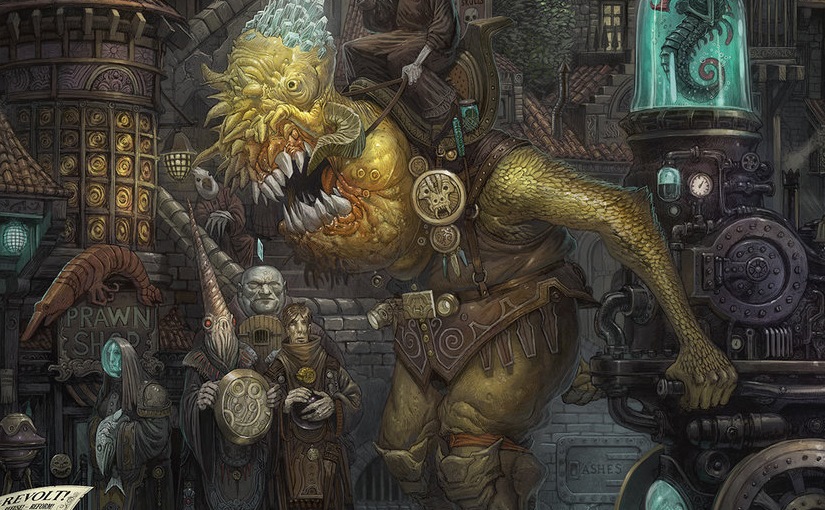 We played Gateway: Uprising the other night which is the third deck-building with area control mechanics mash up game I’ve played and figured I’d write a bit since this type of game has held my interest for a while.

After Martin Wallace’s A Few Acres of Snow, this type of game became a thing with follow ups of Mythotopia and finally A Handful of Stars.  Deck-building with area control is a very  interesting style of game for me, creating player controlled asymmetry like Ascension or Dominion, but with a physical area that is controlled or conquered by players as the game goes along (so they are not as boring as Ascension and Dominion…).  There’s a lot of potential for “wow, I’ve never seen that before” in these games as well as having actual player interaction during the game instead of none.

Gateway: Uprising is a game of various wizard-lead factions (like the Great Fish!) in this very strange city that is having some immigrant and crime problems.  Your factions is built from cards you acquire which are either support cards, merchant cards or army cards build out of the various smaller factions in the city.  Support cards are single play and discard as are merchants, but Army cards stay on the table until destroyed (and they are destroyed often!) at which time they get shuffled into your deck.  Your goal is to score more points than your rivals after time is up or take over all the regions of the city which is instawin.

Unlike Mythotopia/Handful of Stars, locations in Gateway do not become cards in your deck. I was rather surprised by this as the city locations in the game don’t seem to do much except get attacked! You could win the game by not setting foot in the city at all if your faction could pile up enough victory cards (runestones).   However, if a Wizard faction controls the entire city of Gateway, they win the game immediately, so other factions are forced all into the city to make sure no one gets control.

Another interesting twist with Gateway is that there are monsters that show up which can and will destroy the city if not dealt with, generated via an event deck.   So…. this is how the game gets it’s ‘co-op’ tag on the box. It is necessary for the players to work together in order to hold off the horrifying monstrosities that continuously attack the city.  Co-op though, it’s really not. When the monsters start to destroy the sections of the city, it is then easier for one faction to take the entire city over and fighting between factions intensifies.

One thing Gateway has in spades is SOUL.  The art (by concept artist Sean Murray) on the cards and the city itself is superlative and is some of the best I’ve seen in a game for awhile (Rising Sun and Blood Rage aside).  The artist obviously loves Ian Miller/John Blanche as the cityscapes on some cards look straight out of The Enemy Within!  Like Dungeon Degenerates, this is a game that could justify purchase on the weird art alone.

In contrast to the rather dry Mythotopia and Handful of Stars, the goals that your faction has (kill monsters, dominate the city, kill the city guards, kill off the other player’s army) are clear from the outset, unlike the sort of vague ‘go forth and get points’.  Players being able to instantly win with full board control in Gateway is another excellent aspect that obfuscates a bit of the point salad that is inevitable with these types of games.

Mythotopia and Handful of Stars have player’s controlled areas scattered across the map at the start of the game, forcing them to fight with others or neutrals in order to consolidate some sort of defend-able empire and score points.  Gateway: Uprising starts with the city in the game controlled by no one, and the gangs/factions have to stake claim to the board as they go.  I find this a superior method, especially since Mythotopia feels pretty messy when you first start out and you immediately ask yourself why on earth you, as a fantasy lord, would control areas scattered randomly across the country side like this?  You have no sense of your faction or loyalty or what you are trying to do—it doesn’t make much sense.  I chalk that up to Mythotopia being one of Wallace’s ‘mechanics tests.’  Handful of Stars feels a bit better in this regard since the board represents 3 dimensional space and you are an alien faction (with a special power) rather than a generic fantasy lord.  I think both the Wallace games would be better, albeit LONGER if they started the players with a single star system/region or off board to start the game.  This would be a major design change since resources to play and buy cards come from the regions/planets themselves.

The rules are OK, there are some gaps we found in the rules (like, if regions are destroyed, do they count against the ability for a faction to control the city? It never says), so you have to make some judgement calls.  Components are good but the big hexes are not cardboard, they are very thin card and get moved around easily.

Anyway, Gateway is pretty cheap (I got it lightly used for 15$) and well worth having in the collection (the box is small too for those of you with limited shelf space). I like it better than Mythotopia, and about the same as Handful of Stars. Gateway is far easier to set up to play than HoS is though!