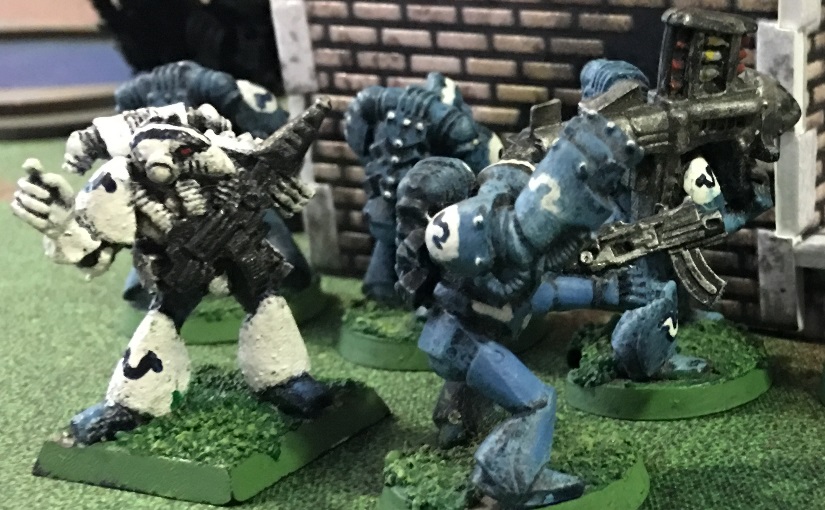 Eight editions and I’m still rocking the 1986 beakies. Anyway, I’ve never been a serious player, but dan and I gave the new edition a spin last weekend.

8th ed. is very streamlined with very simple mechanics where once there was a lot of fiddly stuff. Gone are templates for flamers, explosions and the like and they are replaced with a flat or rolled number of hits to the unit in question.  You can premeasure ANYTHING which is one of the things that made 8th Edition Warhammer Fantasy better than all previous versions.  All this simplification was likely to improve speed of play and allow for very large battles.  At just over 1000 points for the game, it was plenty large for my tastes.

Command points are a new thing to 40K 8th edition, something borrowed from AT-43 and I believe they are now in Bolt Action as well. In the new 40K, they allow a reroll of a die when expended at certain points, pretty much like Blood Bowl.

One very interesting thing we used were the new “Open War” cards that lay out a scenario’s objectives, special rules, terrain and the like without rolling on various charts.  These were pretty neat and would work for any edition of the game. 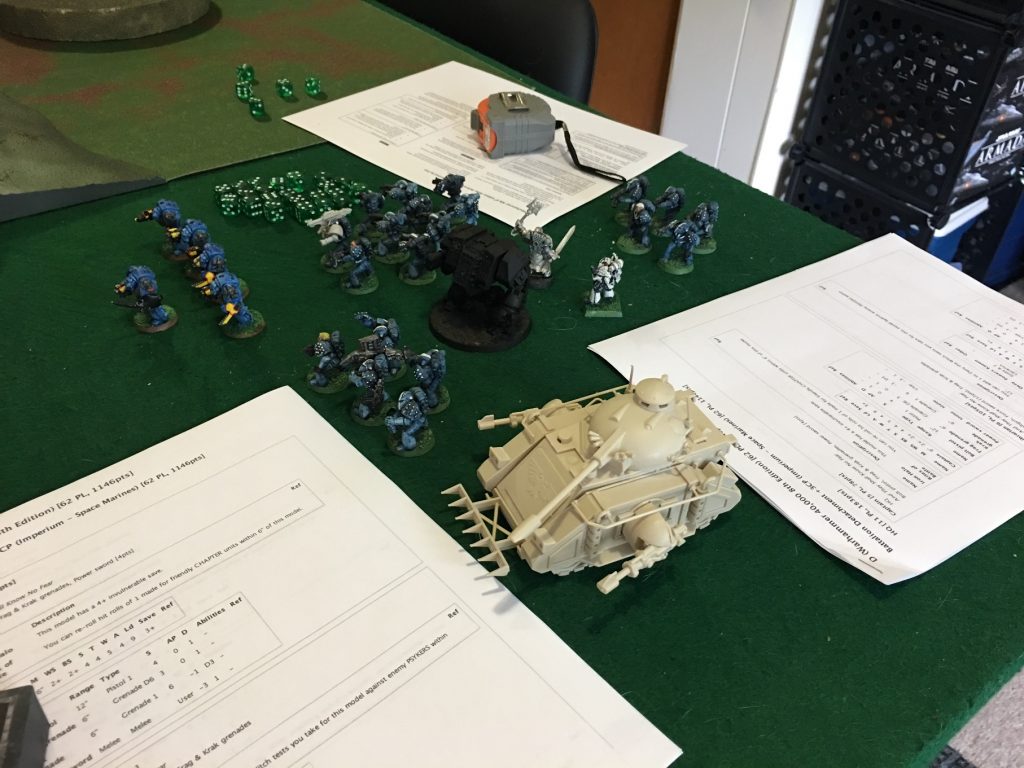 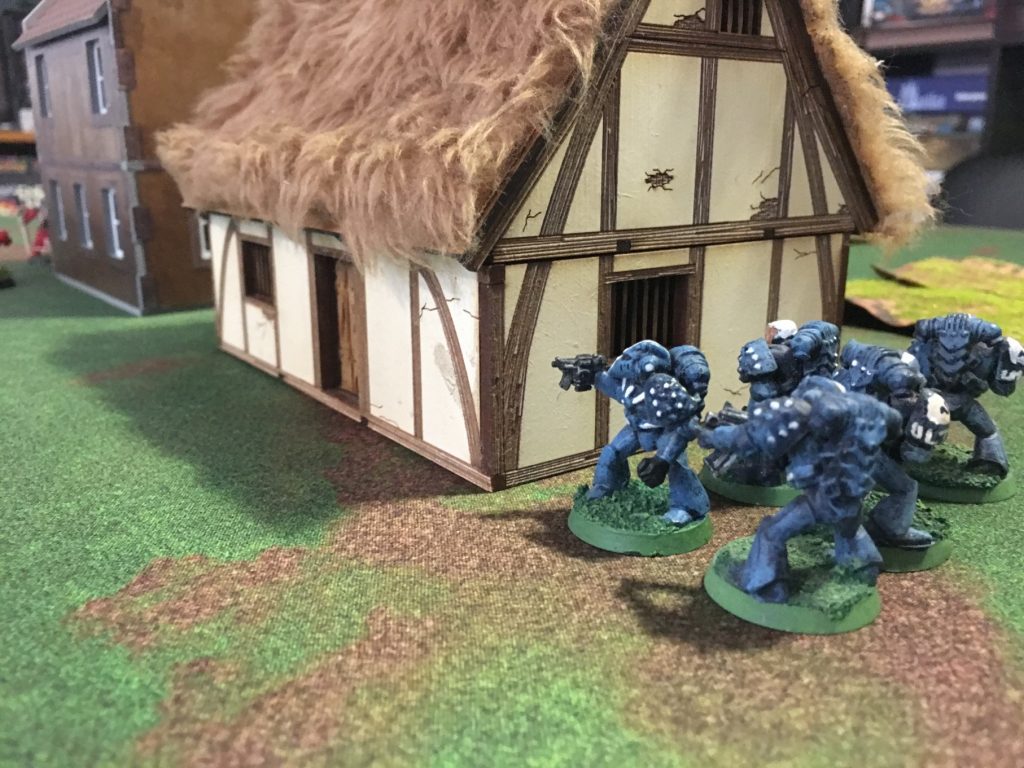 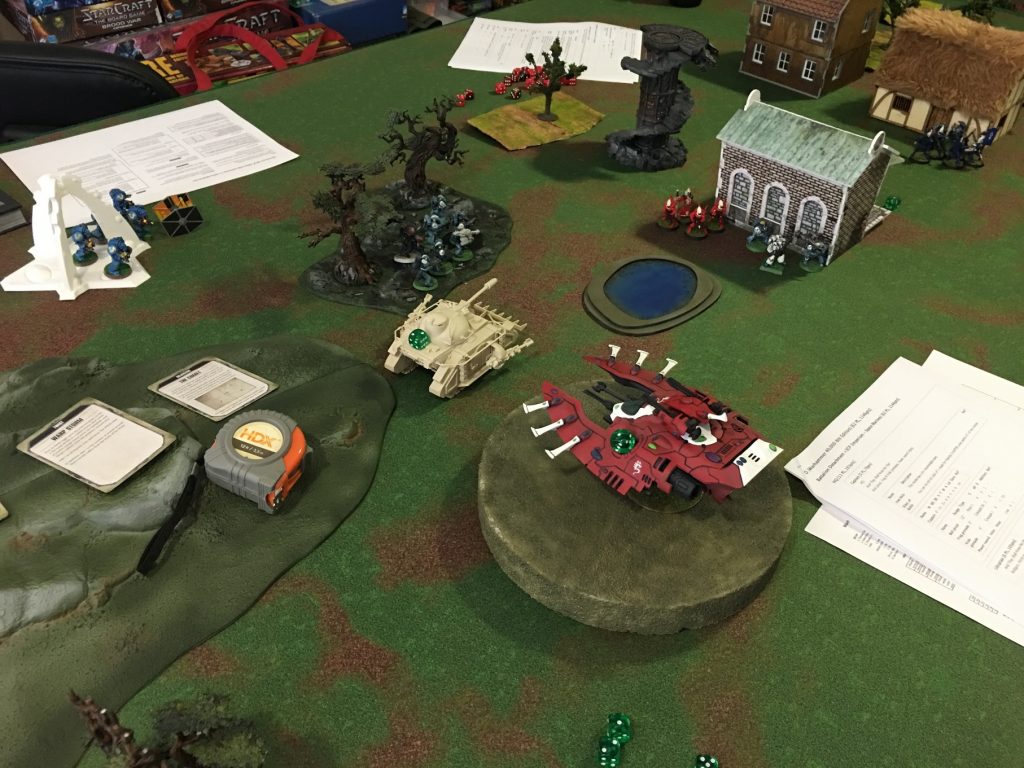 So how did the game go?  It was a ‘grab the objective’ game except that the objective didn’t show up until turn 3.  While I was able to get some casualties on the Eldar, the main thing for me was holding off teleporting on my Terminators until after the objective dropped.  It’s unlikely anyone will get Terminators off an objective in a couple turns. Dan’s rolling was TERRIBLE so there wasn’t much he could do in the end.

Close combat, which is a big thing in 40K despite all the guns, is similar to the old games (chargers attack first, then defenders attack back) except that failing morale checks means removing more casualties as if everything was like the undead from WFB.  This is a pretty elegant solution to remove ALL instances of units running away, rallying and then coming back into the game.  That said we had two close combats that went on and on round after round for awhile, with no clear winner.

I do not like that small arms fire can damage heavy vehicles (i.e.: non open topped or light transport vehicles) so that’s really odd to have someone shooting a bolt pistol at a Land Raider and have it do damage, but that’s my only real beef with the game.

Overall while I like 2nd Edition 40K the best (which fuels Necromunda and Gorkamorka), 8th is very sweet in it’s simplicity without devolving into the Age of Sigmar level.