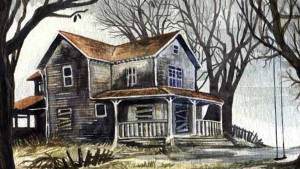 I got a chance to run a FATE-based game last night using the Dresden Files rules.  Instead of going through the usual world-building session that would lead to an extensive campaign, we played a published one-off adventure so people could get the feel of the system.  I chose “Night Fears” as it seemed the simplest both in the low power level of the characters and the fairly simple scenario of kids showing up to a purportedly haunted house to spend the night.  Of course since there are Fae born characters and a ghost talking kid, the house IS haunted.  My goals were to help the players to learn what the Fudge dice were for, how to use skills (the easy parts), and how to use fatepoints to invoke, tag, and asses Aspects.  Also, since FATE has a pretty unique damage system, I wanted them to understand what Stress and consequences were.  I’m a newb myself, so these were also things that I understood in the abstract, but didn’t know how they actually played out.

The characters, pregenerated high school students included a Faeborn trickster, a religious kid whose faith actually gives him some supernatural power, a kid who can see the past (a bit) by focusing in on an inanimate object and a normal girl who is just real sensitive to her surroundings.  Nothing too powerful at all so there wasn’t going to be any running around with axes or gunplay.  What’s cool about this scenario is that these characters start off incomplete without all their skills and aspects chosen and this really gave the players a chance to start to understand what aspects are and how they are derived.  Night Fears has a section devoted to a series of questions to ask the group where the players themselves have a large hand in defining why exactly they are at the house and what they’re each doing there that night.  After a half hour or so, turning the answers to these questions in to aspects became a breeze, and a lot of fun too.  What the aspects actually DO was still a mystery at this point.

Because it was kids in a haunted house, I’d say 80% of the game play we got through was player on player interaction.  Since they were trying to scare each other out of the house, they started doing attacks (social or mental) on each other via ghost stories or trying to freak the others out with tricks.   This ended up causing consequences almost all around the table.  Of course, the house itself slowly starts to do these things to the kids as well (of course!).  Most of the characters took consequence aspects like ‘freaked out’ or ‘creeped out’ but one player took “huddled inside my sleeping bag” which forced him to walk around with his sleeping bag around him from that point on.

We didn’t get all that far, obviously the shit starts to go down the nearer it gets to midnight and I felt as a GM I wasn’t doing all that much (my NPC’s were not ‘active’ much during the session, but people had quite a bit of fun I think.

My main questions are:  When does some sort of argument become an attack– there was a fight over a flashlight (verbal) and in Exalted, you can actually ‘win’ the fight via social combat and get the flashlight, but in FATE, it seemed like the players would be just laying on consequences/stress that didn’t specifically resolve the argument over the flashlight.  Plus if you have social stress from the fight about the flashlight– should this carry over to a fight say– about going upstairs alone?

Environmental Aspects– these are aspects on the scene itself that can be invoked or tagged– but as a GM, if I invoke a scene aspect, who gets the Fate point?  Who pays it?  I’m still not totally clear on those bits.

All in all, a good time and not the usual Exalted 4-6 hour combat mega-bloodbaths I’m used to running (which are also good!).