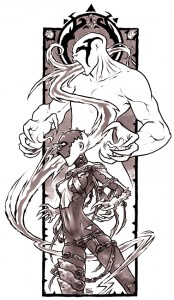 How I missed this announcement during the summer I’ll never know, but it’s actually official. Exalted 3rd edition is in development (and has been for quite awhile now) and will be out next year some time.  This is great but stunning news.  Stunning because both 1st and 2nd edition have TONS of books (most of which I purchased) and will have to again with 3rd edition.  It’s great because as awesome as the backstory of Exalted is, as cool as the 2nd edition combat system seemed to be at the beginnings of play (with basic, unoptimized Solars vs Dragon Blooded or Mortals) it seriously needs a rework to the combat system all the way through.  First, because it’s a very difficult game for a GM to plan and run without a lot of handwaving to speed up play that does not do justice to the system and second because the combat is both narratively and systematically broken.  There are a lot of people that did not (and do not) want this to be true.  For years Exalted discussion has dominated the RPG forums, and for good reason, there is a massive amount to discuss and argue over– the main thing here is as many issues as the system has people really care about it a lot.

This is not going to be easy to do.  Exalted combat, as it stands, takes a long time, is intensely engaging for the players that get to act often (sorry archers) and involves tons of dice rolls. Your characters are rarely dealing with mooks or even mortals most of the time so the antagonists are as detailed and complicated as the player characters.  In terms of bosses, much more so.  This is rough on the GM who has to remember all the stunts for his antagonists AND the stunts the players have in their arsenal.  It’s quite daunting to try to run a  Dragon Blooded Solar hunt team and they are the weakest of the Exalts!  The  part that broke it for me personally is the stunt to mote engine.  In order to keep going in a fight, Exalts (all of them) have to use a narrative stunt every single action they take, whether offensively or defensively.  Every time they succeed, they get motes back.  This makes combat drag terribly, even though the idea of narrative during fights is key and throwing out stunts is a huge no no going forward.  However when you have players that are hoping that they get attacked by the mooks (who can’t hurt them anyway) so they can stunt to get their two motes back in order to fuel their perfect defenses when getting attacked by the big bad is just not a fun situation to be in as the GM.   The initiative system, Perfect Attacks, Perfect defenses, Soak, Armor, Ping damage, and the total invincibility of the (updated!) version of Mask of Winters– the list of issues is long and tangled for 3rd edition to work out.

This is stuff I’d like to see (and Matt too):

No movement measure in yards – FATE uses ZONES rather than yards, etc. and it works awesome.  This should be stolen.  I hate Exalted chase scenes and combats where people are trying to stay just out of reach by a ‘square’ and such.

Not too many charms! – Kerberos Club allows characters to create Skills with trappings that allowed lots of stuff to be done with a single ‘power.’ even for magic users, the ability to create trappings (a trapping would be like “Strike” or “Climb”) during a session.  This is cooking good if your players can grok it.

Charm cards – let’s have some official ones that players can use.

Let my character get hit! – Perfect defenses are OK in theory, but when you MUST use one to not die, it’s a problem.

That said, there has been enormous amounts of discussion around the Exalted combat system since 2nd edition came out and tons of ideas on how to fix it from some really brilliant minds (who started with the errata bringing it to 2.5).  Many of these brains are working on third edition and know exactly what the system needs so I have great hope that the game will be essentially playable while holding on to that special magic that Exalted certainly has.  Beyond the metaplot, which is incredible, to me it represents, along with FATE (Kerberos Club especially), the evolution of truly narrative focus for everything in an RPG (including and especially combat)  that started (for me at least) with Robin Law’s FENG SHUI, so that we are not simply clearing out a room of 66 Gnolls after clearing out two rooms of 25 Gnolls, our characters are fighting for reasons and take consequences for STAKES.  It’s possible in both Exalted and FATE for your character to be fundamentally changed by the outcome (other than, you know, croaking) of a single combat.  As we push forward in RPG design, there are three systems that I am really looking at that I feel are carrying the torch of Feng Shui.  Obviously FATE Core 3 that will come out with Atomic Robo RPG, Legends of the Wulin (which I know I will never likely PLAY outside of a con setting, but I want to absorb the system) and now, of course, Exalted 3.

And of course, I wonder what the Exalted world will look like after the events of The Return of the Scarlet Empress…