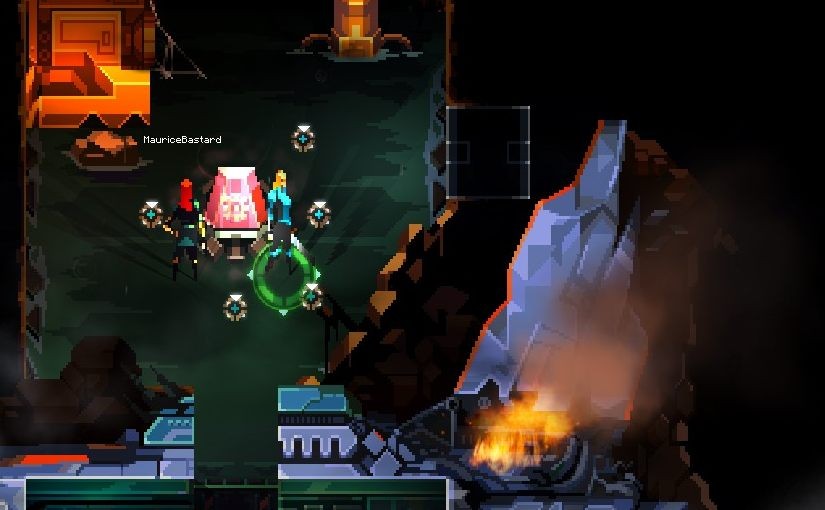 The premise is that you are some prisoners that jettisoned/escaped onto another planet, but crashed into what appears to be some sort of bio-lab gone all sorts of wrong. You have to get to the top of the complex by bringing your power crystal to the exit elevator on various levels.

You have various prisoners that you command to open doors and fight (pretty much just that) and you can build resource bases and defenses with the stuff they find.  Each door you open adds resources to your pool that you can spend (including on the extremely important levelling up of prisoners) so each level is ‘timed’ in that there are only so many doors to open and that’s it.  If you waste your resources, you will become dead.

Each level builds up to the rush to the exit with the Power Crystal.  As soon as a character picks up the crystal, all doors will open on the level and waves of monsters will attack (forever, please note this) until your prisoners are dead or exit.  Simple premise, executed extremely well– except for the crashes.

The game crashes a lot.  I’m sure in a few months this will not be so, but right now I’d say about half the time after level 5 the game will crash.  It’s just one of those things.

Lastly, the game has multiplayer and I’ve tried it with Keneda.  Both players get a single prisoner to use (can get more on the levels) and share what’s on the screen, but not backpacks or resources.  We got fairly far and planned out our escapes quite well until, inevitably, the game crashed.

Plowing through all the indy/casual stream of shit on Steam for diamonds isn’t easy but this is one of them, burrs and all!