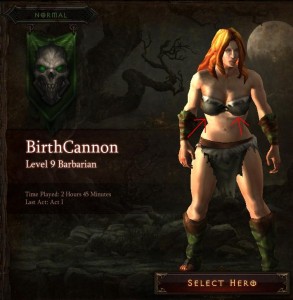 i’ve now played all 5 characters through to the end of the diablo 3 beta. overall i’m impressed and sad at the same time. i will buy the game when it comes out and learn to love the drm.you will feel the lag! you’ll fire up diablo 3. within the first 1hr of play you will feel the lag. you will feel disconnected from the action while playing single player. you’ll get hit by a monster and wonder, “wtf, i was clear of that hit” yet you will still get hit because the calculation for that hit happened on the blizzard diablo 3 servers and not your computer.

this is basically what happens. you run up to a monster and punch it.  you see the monster wind up their attach which clearly tells you to move your character out of the fucking way. you move your character. the blizzard diablo 3 servers are busy calculating your inputs and the monster’s attach. data is racing back and forth across the internets which are all clogged up with japanese rape dungeon porn and “I’m at the McDonald’s obeying my child’s cries for FAT and SUGAR” facebook updates. mean while your local diablo 3 game client shows your character moving away from the monster, clear from danger. you think to yourself, “i’m so smart, i dodged that attack”. BAM! the hit calc finally arrives from the blizzard diablo 3 servers. now your simple single player game interaction sometimes feels like buttered SHIT.

Video of the laggy monster hits.

BUT you keep playing! you can’t fucking stop. you play AROUND the lag. why? why is there lag in a single player game in the first place? Digital Rights Management! The only way to lock down games on the PC today and have an appreciable effect on piracy is to make them some kind of MMO requiring a player to be online all the time while at the same time keeping a good portion of the game code on the publishers servers away from the players(haxxors). all to prevent you the consumer for stealing the game. we all can thank CHINA for diablo 3 being online only. CHINA pirates the FUCK out of everything, especially computer games. for years now game devs in CHINA have been forced to make their games into MMO’s, and not just any MMO either FREE TO PLAY MMO. AKA here’s a shitty demo of our game, to really enjoy this game here are a ton of MICRO transactions to spend money on to get a full game experience, we (the devs) hope you end up spending shit tons of money 1-5$ at a time without really noticing that you are paying more over the long run. ALSO we devs get people who would have normally stole the game to drop a couple bucks while they try it out perhaps. THANKS A LOT CHINA! of course piracy exists in the US and A and Europa too and fucking Russia, don’t leave those criminals out of this.

blizzard knows all this. blizzard makes the most popular MMO. blizzard sees diablo 2 pirated UP THE ASS ALL OVER TOWN by the russians and chinese. blizzards spends 10+ years making diablo 3, spending millions and millions of development dollars. blizzard is completely OKAY with giving the paying players an occasionally laggy single player experience to get their MONEY back and make a clean and tidy profit. it’s that fucking simple ASSHOLE CONSUMERS! (and yes someday the haxxors will make rouge diablo 3 servers to play on)

so i hope you enjoy lag while playing by youself. i hope you enjoy reading books or playing iPad games when you travel to a place without internet or when your home connection gets fucked up and goes down because diablo 3 does not have an offline mode, if it did PIRACY MOTHERFUCKRS!

i’m almost too tired to talk about the gameplay in the diablo 3 beta after all that shittalk. diablo 3 beta is fun, pretty, gory, entertaining, addictive and DIABLO. i just really hate the fact that Blizzard knows they can make diablo 3 into a DRM ridden poison pill and still sell millions of copies.

okay i have the following details to report from the diablo 3 beta:

0. GIBBS. monsters for the most part die wonderfully. blood and puss fly around, splooshing on the ground when monsters get smashed apart. chunks of monster roll and bounce enchanted with the damage type that killed the monster, flaming, bricks of ice, oosing poison, or glowing with arcane damage. RAG DOLL RAG DOLL RAG DOLL, you will be seeing too much RAG DOLL. it’s sad but true, rag doll is overly used in monster deaths. i’d much rather see shit chopped up or knocked down on the ground from a heavy hit then see it fly across the screen in the unnatural rag doll motion that we’ve been seeing since 2003 or there abouts. there is everything inherently dumb about seeing a killed zombie do a chart wheel.

1. moving items around from your characters backpack to the paper doll or to the stash can feel laggy. it doesn’t always feel laggy, but sometimes you can feel the fact that you are just moving bits around on the diablo 3 servers when you are moving shit around in your inventory. this is something MMO’ers are used to and blizzard really doesn’t care about non-MMO’ers non-mmo’s to blizzard are just pirates that don’t spend enough money to be considered good trusted consumers. so here i am, a paying consumer whore, just moving shit around in my backpack and it takes a second to register the move, LAG, thanks to my always online single player game.

2. loot drops.  there’s a good amount of it in diablo 3 beta, but something feels off. it’s tuff to say how loot will be doled out by blizzard in diablo 3 when diablo 3 is finally released, but in the diablo 3 beta it feels a little OFF. balancing the loot drops and a “HEALTHY” online diablo 3 economy will be difficult. who knows if it will suck, let’s hope it doesn’t fucking suck. but again, if you are just going to play single player and don’t care about trading items or the auction houses, will loot drops be balanced for single player only type of play? blizzard has been insisting since day one that diablo 3 will be completely solo’able, meaning a person can play the entire game by themselves and have “fun”. blizzard ALWAYS follows this statement up with, “BUT multiplayer is way more fun then single player and multiplayer is really where the game shines!”. PR BULLSHIT! who cares what the game developers or marketers want, there are a SHIT ton of diablo players that want to play by themselves. i think blizzard doesn’t like single player gamers because they don’t spend as much money as MMO addicted gamers and these single player loner gamers are most likely pirates, so why bother trying to balance the loot drops for single player? just make the sure the loot drops DONT break the multiplayer trading and the auction houses. even without taking a negative stance you should admit to yourself and baby jesus that blizzard’s priority for loot drop balancing will be for multiplayer, which in simple terms means less rare(good, cool, fucking radical) drops for gamers playing solo.

3. items items items? which are better? blizzard has attempted simplify item usage in diablo 3. it feels simple and not as cool as diablo 2. it is easier to understand how items benefit your character and thus the items don’t feel mysterious/interesting and thus kinda gay. jay wilson is winning his war in dumbing shit down to make the game unrbeakably fun and EASY for “gamers” to understand and play. jay has some valid points about how the itemization in diablo2 was broken, but i’d say the “ease of use above complexity” mantra has taken a toll on the items in diablo 3 in comparison to the mystery that diablo 2 brought to the table with items. until i play the full game i can’t say for sure if this is just a problem with the beta. the crafting is basic min-max gambling. you break down shit you don’t want in an antempt to roll new items that have the best random stats. it seems fun and should clean up the d3 economy nicely.

4. classes are they different? the devs for diablo 3 wanted each class to play differently and included the idea of each class having their own resource to manage. it works okay be it’s not THAT amazing in practice, all the d3 devs really did is remove mana potions and make characters either generate “mana” through attacking or via passive regen. SO what does this mean in gameplay? how is the wizard different the the witch doctor? not very different at these early levels, they both cast pretty much as much as they want and have fast regen resources. how is the barb different from the monk? not that different really. for all the talk about different resources making the characters play differently, it’s kinda a wash. i can’t help but think that PvP HAS influenced the character designs too much to the point where we don’t have unique characters, just caster or brawler. i’m happy with all the characters and can say the characters do appear to play a bit differently, but just a bit, it’s not a radical change moving from character class to character class.

i’m gunna play some more and do some video recording. hopefully i can show how the lag feels cuz it’s the only SUPER weak point for diablo 3 beta. once we get a chance to see how torchlight 2 handles, it’s possible diablo 3 will be purchased only because we MUST and once defeated in single player  it may be abandoned to the hardcore nerds that want to loot farm.

2 thoughts on “diablo 3 beta or: how i learned to stop worrying and love the drm”