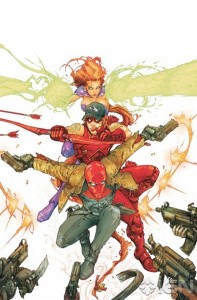 Yeah, I’m a weak person.  I broke down under the hype (and phone calls from MATT) and picked up a few issues of DC’s re-numbering of their popular titles (some had gotten into the 700’s so it was about time).  I was skeptical because, like a lot of people, I remember the awful Marvel New Universe.  So DC put out a new Batman N0. 1, Action Comics N0. 1, Justice League, etc.   With the exception of Swamp Thing, back in the day I discounted DC’s stuff during the heyday of Xmen (mid 80’s but before the X-splintering into so many titles it was impossible to collect or follow).  When ROM ended (shittily I might add), I picked up a Batman here and there and it was ALWAYS good, in addition, I got into the Justice League International madness when that was going through a really awesome period of writing and art.   With the normal Justice League, you knew they were going to just kick everyone’s ass once they got through the curtain of bullshit surrounding an enemy or problem, they had Superman after all.  With JLI, typically their ineptitude and lack of communication was a huge part of the curtain of bullshit between them and the real enemy.  What’s more, they were typically totally outmatched by their opponents (with the exception of times when Guy Gardner was around) once they actually found out where and who they were.   Anyway, it had a good run, and the new 52 one was meh.  The Batman one I got was good but extremely grotesque, I can’t leave that around for the kiddos to see.  Still sort of meh.

At the counter there was a free mag going through all the comics in the new 52 and though I feel a bit blase on the first couple, there are a few in the list that look like winners.   First off is Justice League Dark– dealing with spellcasters  (of course Zatanna is all up in there) and the like (John Constantine from Swamp Thing for example).  The cover is just gorgeousity itself so that’s a must buy.  Second is a title that I think is totally new: Red Hood and the Outlaws.  It looks very Image-esque (which is good for the art, but bad for the writing) and is in fact penned by a guy that worked on WildC.A.T.S.  Last is, and this is really showing my personal weakness, the oft-cheesy (especially back in the day) Legion of Superheroes.  While I’m aware of it’s cheese potential, I think this is the closest thing in print to the Alien Legion, so yeah, that’s my excuse.

There’s a bunch I’m on the fence about: Suicide Squad, a new Jonah Hex title, Animal Man (awesome cover there) and Batgirl (yes–batgirl) that I’m going to have to page through to see if their up to snuff before buying.  I know people are huge fans of Justice League, but I’m not one of them.  While FAR better than Marvel’s Avengers as a team, when you have a character involved that could punch the planet out of orbit, it just loses it for me.

Perusing the comic shop: what on earth happened to the fantastic four?  Spiderman?  White suits?  No Johnny Storm?  Well if any series needed a change, this was one (the Avengers can’t be made right so they shouldn’t even try).