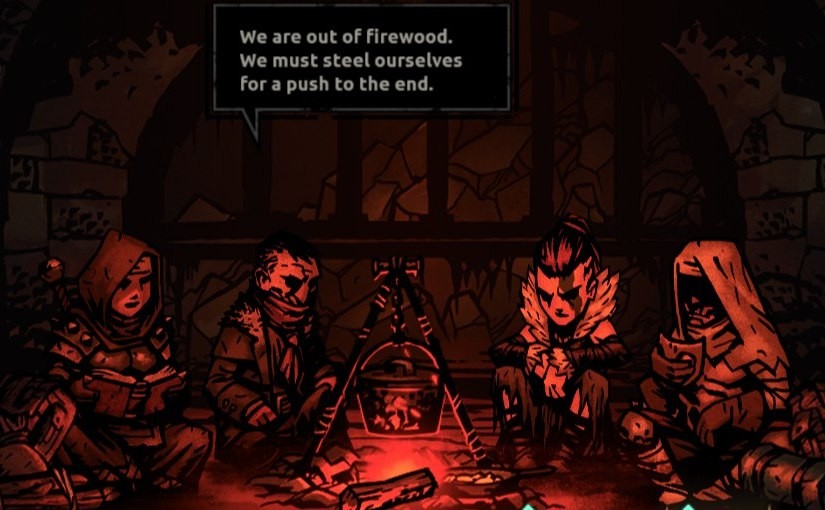 Being a fan of Warhammer Fantasy Roleplay, Call of Cthulhu and as a card carrying member of the OSR (is that even a thing?), I like my adventures mean and insane and not necessarily in that order. The first two games above have sanity rules, while my choice for OSR play (LoTFP) has no CODEFIED rules for it, which is just fine by me since then me (or Steve) as the DM’s can make up rules on the fly when necessary but holy fuck is it in there– that insanity that is. There is an adventure with a disk that if your character puts it on their head from the bottom (the logical way) it crushes your brains out, if they put it in from the top it downloads the ENTIRE internet circa 2009 into your memory and your character goes insane.

Anyway, I digress. A recent early access STEAM game, Darkest Dungeon, caught my fancy for it’s very fancy graphics and old-school dungeon crawler feel. It’s a party based RPG where you delve into dungeons and areas around an old mansion. You can have a very large party, but only four can go down into the depths at a time. The combat looks a bit like DRAGONS CROWN (holy shit yeah) but is entirely turn-based in play (so it’s OK for steve). A nice implementation of a dungeon crawler that is augmented by the fact that your characters gain MENTAL skills, either insanity or helpful mental quirks. Some are bad, some are good and some are situationally bad or good, which is pretty clever. This reminds me, of course, of Rome Total war where your generals and leaders gain traits based on what they are doing. Leave a decadent man ruling a town for too long and things get a little catamiteish after awhile. Have your general on the front line of battle all the time and that can lead to some very bad things as well, such as not taking orders and rushing headlong into battle, or injuries.

Darkest Dungeon’s aesthetic is early modern (influenced by Warhammer Fantasy Roleplay and LotFP no doubt) with pistoliers and lepers and vestals (virgins?) in the character class mix. Not only can you customize your party, but as your characters get better at what they do, they can tune their skill sets (you can choose 4 out of however many you have) for what’s best for the party. It’s easy to sit down and play, and in that way it is pretty casual, but it’s also difficult and seems fairly deep.

While I’ve only played Darkest Dungeon for a few hours now, I am definitely interested in playing through it eventually, given I can stop playing Torchlight 2 with everyone first. I do think Dungeon of the Endless is flat out better than Darkest Dungeon but both are games one can own and love almost equally– graphics wise both are simple GORGEOUS games.