This game has been around a long time and has survived as a CCG for nearly as long as MTG.    I’ve played it with the kids and it’s actually a fine game but there are traps when buying cards/playing. I’m not going to go into kids scamming cards off each other in kindergarten and grades above, that’s the subject of another post (i.e.: how did my 6  year old get about 60$ worth of EX foils when he had a couple packs of cards to start?).  What I am going to go over is how to save money and have fun with the game while your kids are interested in it (likely age 5-9 or so). While this is potentially a CCG money pit, Pokemon is not a video game or some iOS bullshit, even though it is still an indoor thing for kids, so it should be encouraged over other indoor activities just like pen and paper RPG’s should be.

This is because the way kids play in school is to slap down the best pokemon they have and compare it’s damage to another pokemon’s health and call it a day.  The big EX’s and GX’s have large numbers on them (some of them at least) so the kids want those.  They also look cool, foil, distorted hyper anime art, etc.  This is fine and if your kids want to keep doing that, there’s nothing wrong with it, but that means they will only want a few cards (all EX’s) and there’s no point in buying packs — those are VERY rare in the packs.  Buy them singles they want for as cheap as you can and you’re done.

However, if your kids want to actually play the game, there is more to it.  If you’ve played any CCG or even deck builder, it’s pretty simple:

Now, there are a lot of buying options and I flat out recommend not buying Tins, not buying boosters, not buying the “theme” decks and not buying trainer boxes unless your kids get super hardcore and even then, maybe buy singles.  The decks you can build and play using the cards from any one of these sources will suck to play and not be fun for anyone.  I wasted some money there (probably about 30$ all told) before I realized this looking at tournament decks online.  Their composition was VERY different from the Theme deck I have…and very different from what comes in the packs you get. 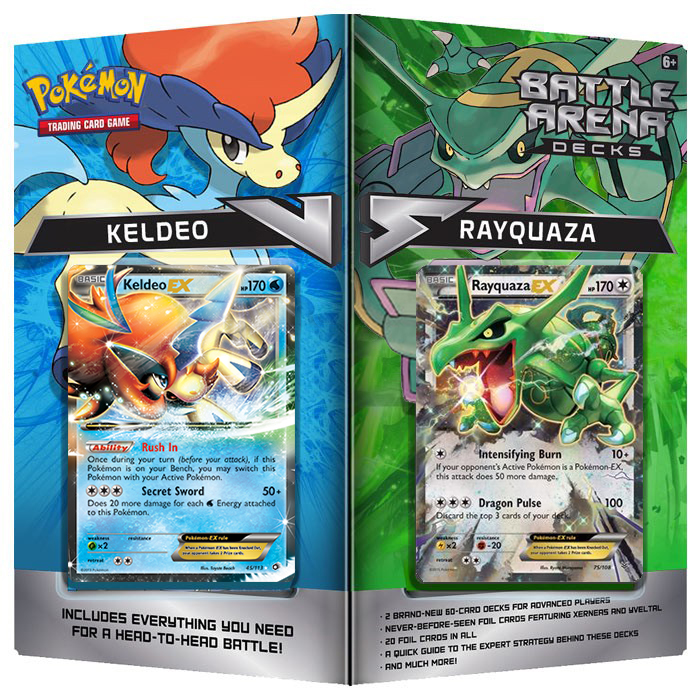 Instead of all the various stuff on the shelves at Target or Walmart, you want to buy the Battle Arena decks.  These are usually two decks in a pyramid type box that are full on ready to play out of the box.  These is pricey right out of the gate (about 30$), but in contrast to the boring Theme decks or random card packs, each one is tuned up with an economic and combat engine centered around a single EX type pokemon (each deck has two of these cards) that work very well and are fun in play.  While nothing to the level of tournament decks, the Battle Arena decks emulate their structure and solve the critical problem with the “theme’ decks and tins and boosters in that they have WAY too many pokemon compared to other cards.  Perusing actual decks, you need only about 12 pokemon in a 60 card deck, about 12 energy cards to fuel them and the rest are the cards the kids just throw on the ground when they get them out of a pack: Trainer cards.  Trainers are the gasoline that fuels a deck: extra card draws, denial, flipping pokemon from the bench to the active area, moving energy around — all the critical stuff you need to do to make the attacking pokemon effective and the deck efficient.

We have the (above) Keldeo vs Reyquaza deck and it’s a solid competition between them.  There are two other battle arena decks out there (another one coming in a few months) so your kids will have something to select among what looks cool.  While it won’t be easy, it’s possible to switch out the EX and pokemon of specific types with another GX and other pokemons, leaving the trainers in place to support the deck.  If your punk kids have SPECIFIC GX’s they want to run, this may be the only way.

It will take a bit for your kids to grok the combo/engine in each of the battle arena decks, but when they do, they will know how to set it up and then later, how to block the other punk kid’s combos if possible. This leads to a lot of exploration of depth that would take months or years of just playing with stuff out of the tins or theme decks.  Most importantly, it will make you as the parent NOT BORED instead of terribly BORED with the game.  They still may just slap pokemon down on the table when they are at school, but at home you will have fun with the real deal.

Lastly, sleeve the cards.   While this may seem lame to the kids, it helps them shuffle and handle the cards and it keeps what could be a 30-50$ card from being destroyed and driven into the mud on the playground, or lost and spilled upon under a car seat (both of which I’ve seen first hand).

That said, you may have a kid or kids that just do not like the game when actually played for real, but still want the cards to look at.   This is OK too, but due to their desire for ALL GX/EX foils, can get very expensive.